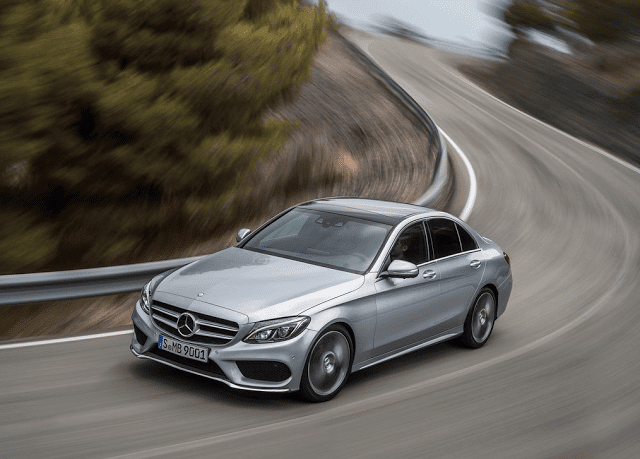 As U.S. passenger car sales volume slid nearly 4% in June 2015, some of the most popular premium brand passenger cars were immune to the trend.
Joint sales of the BMW 3-Series and 4-Series were up 17%. The Mercedes-Benz C-Class shot up 48% to 8316 units. The Audi A3 posted a 42% gain and thus outsold its most direct rival, the Mercedes-Benz CLA, by more than 1000 units.

Yet a number of popular premium brand cars also posted sharp declines. For the Mercedes-Benz E-Class, the 44% drop in June was the E-Class’s eleventh consecutive year-over-year decrease.

While costly SUVs weren’t completely free from the possibility of June declines – just look at GM’s big SUVs in the lower list – there were significant gains produced by most of America’s top-selling luxury utilities. Combined, the BMW X5, Cadillac SRX, Acura RDX, and Audi Q5 were up 40% last month.

Source: Automakers & ANDC
$45,000 USD (before delivery) is an arbitrary borderline, but if GCBC was to follow this system of designating only expensive vehicles as luxury vehicles, adding approximately $15,000 to the average new car transaction price seemed like a fitting place to begin. Plenty of less expensive vehicles with specific models feature prices above $45,000 – M, RS, and AMG models come to mind, specifically – but in the case of the second list, we know that none of the registrations were of cars priced at $32,750, as would be the case with the new BMW 320i, which costs less than a Honda Accord V6 Touring.
* BMW USA, not GoodCarBadCar, has tradtionally chosen to combine sales of the 3-Series and 4-Series. Although BMW broke down those figures in June, we’re continuing to combine the duo here for consistency’s sake through the first-half of 2015.
^ Escalade breakdown by variant