Ford is on a roll. Forgetting the fact that all the “great Ford product” talk you hear completely ignores two Bad 8 Supersize members, the Ford Ranger and the Ford Explorer Sport Trac, while also setting aside The Bad 8 v3.0‘s Lincoln Town car, Ford has in its repertoire numerous desirable vehicles. The Good Car Guy named the Ford Fusion Hybrid to The Good 12 v3.0. The Ford F-150 SVT Raptor is firmly ensonced in The Good 12 Supersize v2.0. It’s already been said on Twitter that the 2011 Ford Mustang, in both V6 and V8 forms, is a strong candidate for The Good 12 v4.0. Plus, the handsome new 2011 Ford Focus is on the way and the 2011 Ford Fiesta should fare well, despite the hatchback’s expensive base price.

Don’t let that make you think Chevrolet is caving. Its parent company, General Motors, is paying back its debt to the government far more rapidly than anticipated. Sales of the Chevrolet Equinox are strong. Two Chevys found their way in to the Top 10 Best-Selling Cars In America list for March. Sales of Chevrolet vehicles were up nearly 41% over March of ’09. These two world-famous American badges are doing well of late, no doubt about it. Contrasted with one another in the Graph below are sales of a few core models – Chevrolet vs Ford. 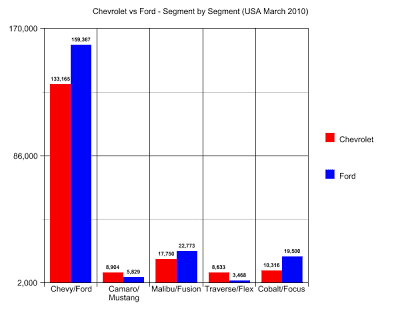