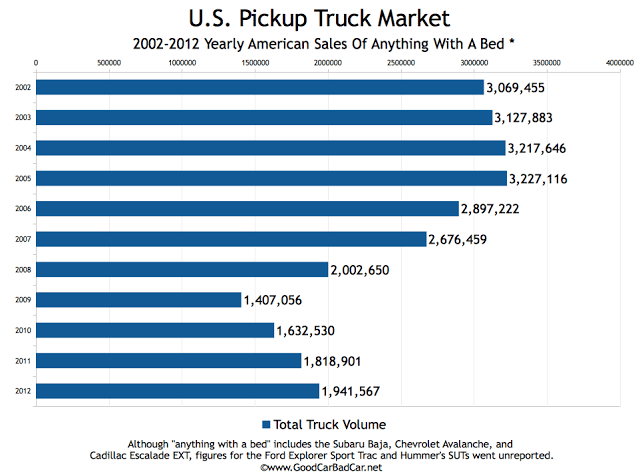 With sales data for the first five months of 2013 in the bag, we know that America’s appetite for pickup trucks has grown 14.5% compared with the same period in 2012. This far outpaces the industry’s growth. Total new vehicle sales are up 7.2%.

Trucks currently account for 13.6% of the overall new vehicle market; 13.8% in May, specifically. Those numbers are up from 12.7% in the first five months of 2012, and up from 12.5% last May, when the Ford Ranger, Dodge Dakota, Chevrolet Colorado, GMC Canyon, and Suzuki Equator contributed 23,913 sales, or 2.7% of the truck market’s total.

The Ranger and Dakota have died off, and sales of the Colorado, Canyon, and Equator totalled just 4139 this year. 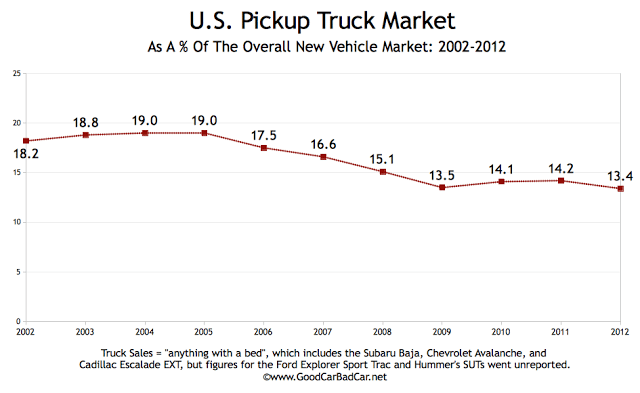 The year’s not over, by any means. We don’t even get numbers for 2013’s halfway point until Tuesday, July 2. However, today seemed like as good a time as any to build a few charts which show the size of the truck market over the last decade. (We threw in 2002 for good measure.) Much has been said, both here at GCBC and elsewhere, about the fast-growing truck market.

But it’s important to keep this in historical context, and not just in the context provided by the most recent history. Truck sales are growing, but they do not account for nearly as much of the industry’s volume as they did even in 2011, let alone 2005.

In part, this is a result of a mass departure of truck nameplates. It also reflects the growing acceptance of crossovers and small cars as appropriate family vehicles. Perhaps that desire isn’t growing fast – the subcompact boom has slowed – but in comparison with 2004, times have most definitely changed.

It’s not just the departure of most smaller trucks that have played a part in the decline of pickup truck sales. The trucks that remain, even the best-selling F-Series, don’t garner the attention they once did.

The sheer size of the American pickup truck market is definitely only part of the equation. It’s certainly relevant, as the impact of increasing or decreasing volume is keenly felt across the United States. But as a tool to measure the desire for pickup trucks, the size of the truck market relative to the overall market is just as pertinent. So in the second chart, you can see the impact trucks have on the overall automotive sphere. 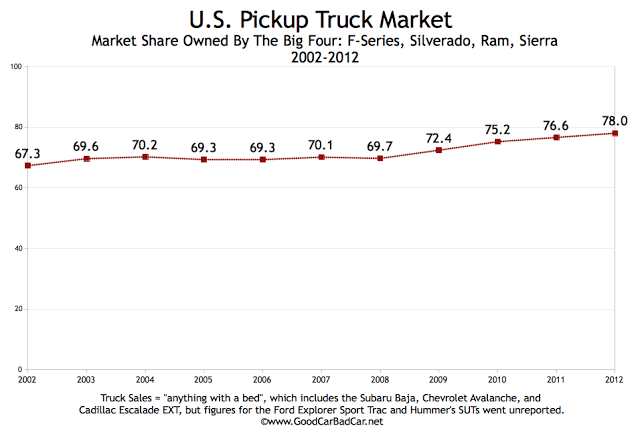 Finally, you can click the third chart to measure the sway of Detroit’s four main trucks: Ford F-Series, Chevrolet Silverado, GMC Sierra, and Dodge Ram. As a quartet, they own 81.3% of America’s truck market in 2013. How has that number changed over the course of the last eleven years? Rather a lot, I reckon.