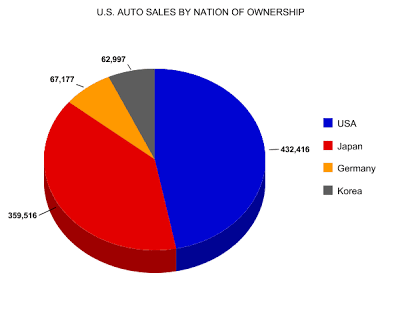 General Motors is bankrupt. Chrysler is climbing out of bankruptcy. Toyota is losing money hand over fist. Porsche isn’t sure if it can take over the Volkswagen group. It appears no auto manufacturer has the money (or clout) to purchase troubled GM children in Europe (Opel/Vauxhall) so Magna will grab that. Meanwhile, another troubled GM kid, Saturn, needs Penske to step in.

Ah, the golden age of the automobile is upon us. No, really. Cars are awesome right about now. Bad cars are only bad because they’re boring, not because they fall apart when you shut the door. Good cars are actually great cars considering the safety regulations forced upon them and the weight consumers demand via features and options. So don’t go a’judging the sales figures below by any standard other than personal money malaise.
The Good Car Guy has already updated you on Canada’s Sales Stats from the month of May. For America’s performance, it seemed like a wonderful idea to put the important figures in Graph form. What you see below are sales by nation of ownership for the month of May only. Volvo and Saab, do recall, are American-owned. Mini, for the sake of this graph, is German. You get the picture. True, Toyota, with the help of Lexus and Scion, looks like a possible victor over New GM in the yearly sales contest come December. Overall, U.S.-based auto manufacturers still dominate in the U.S.A.

Now take a look at luxury sales in America for the month of May. This pie chart excludes the low totals of Saab (783) and Porsche (1,979) but bears witness to the fact that American luxury is…. ahem… luxurious indeed; if luxury is rated by rarity. 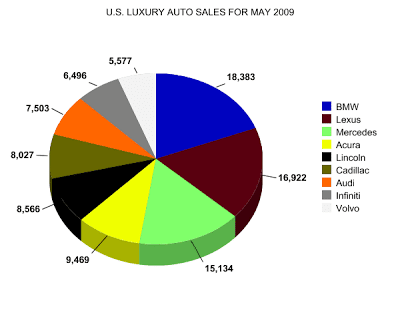