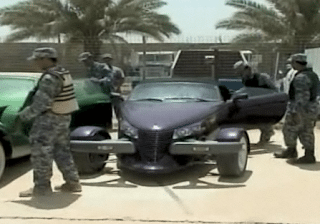 SONS OF HUSSEIN LIKED CARS TOO

Yesterday, the story was of Iraq’s hotrodders. Today, the cars of a dictator’s son. Not surprisingly, before their deaths, Uday and Qusay Hussein, Saddam’s sons, enjoyed displays of wealth. These were punishing men – stories of their wrath abound in and around Baghdad.

Nevertheless, a tipoff that led Iraqi police to a handful of stolen cars revealed an odd variety of former Hussein family vehicles. Ferrari F355? Not in this lot. The Plymouth Prowler, so representative of retro-happy Chrysler-of-the-90s, sat in a dusty area with weapon-wielding Iraqi soldiers. Yes, it’s purple. Yes, under the hood sits a V6 – just a V6, as so many loved pointing out – in front of which are two pieces of bumper, probably the ugliest front-end protection ever. Older British luxury rests alongside.
Check out the AP/CNN video here. Name the cars if you please.