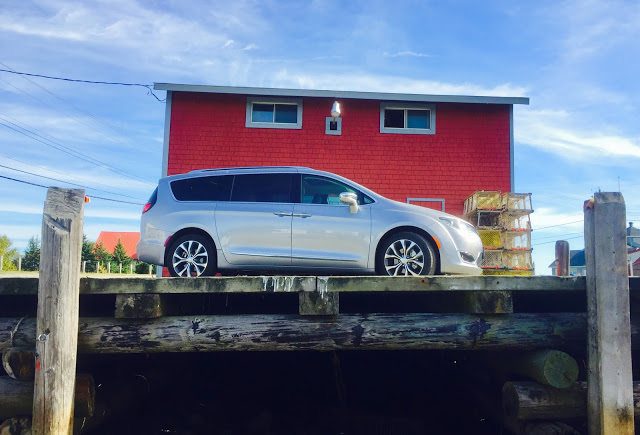 2017 Chrysler Pacifica Limited Review – What, Did You Think A $62,340 Minivan Wouldn’t Be Disarmingly Pleasant?

No vehicle meets the needs of a growing family more efficiently than a minivan. Affordable to purchase, relatively economical at the fuel pump, laden with features, and slathered with seats, the modern minivan may not be the most desirable mode of transport, but in all objective terms, it’s the best.

For the purposes of this 2017 Chrysler Pacifica Limited review, we’ll have to scratch the affordable tag from the list.

The press fleet test van FCA sent to GCBC Towers was a fully-loaded Limited trim, but even the “base” $45,890 Pacifica is a Touring-L with power sliding doors and tailgate, leather seating, and tri-zone automatic climate control.

Tack on another $16,450, the price of a decently equipped leftover Chrysler 200 midsize sedan, to reach the lofty perch of this heavily optioned Limited.

There’s nothing comparable in terms of price and equipment in the Pacifica’s class.

Fortunately for Chrysler, no minivan is comparable when it comes to ride, handling, acceleration, driver comfort, or style, either.

WHAT IS IT?
North America’s minivan culture began with the dawn of K-car-based Dodge Caravans and Plymouth Voyagers in 1984. At Chrysler, where the Town & Country label was previously affixed to the backs of station wagons, a two-year hiatus resulted in a Caravan-based Chrysler Town & Country minivan in 1990. That nameplate persisted for five generations through 2016. Just as the Town & Country nameplate was resurrected for a different bodystyle, the discontinuation of the Town & Country now means Chrysler can resurrect another defunct nameplate for a new minivan. The Chrysler Pacifica was a three-row crossover built from 2003-2007 at Chrysler’s minivan assembly plant in Windsor, Ontario. 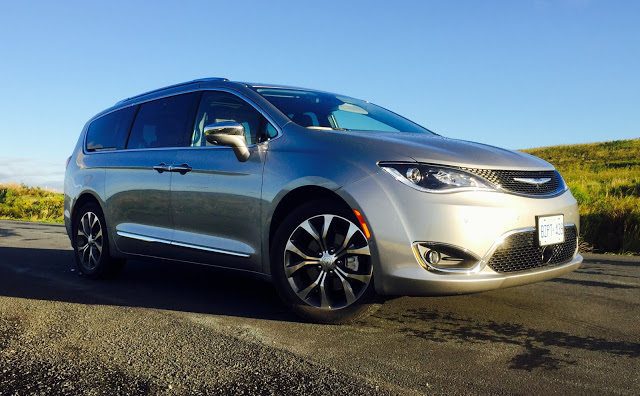 For 2017, the Pacific becomes the successor to the Town & Country and central to Fiat Chrysler Automobiles’ minivan plans. The Dodge Grand Caravan is doomed, FCA says, as the automaker intends to limit direct competition inside the fold.

Unlike its predecessor, the 2017 Chrysler Pacifica is available with eight-passenger seating. Stow’N’Go seats that fold into the floor are standard on all Pacificas. There is no all-wheel-drive option. The 3.6L Pentastar V6 from the old van, now making 287 horsepower, is still under the hood, but it’s now linked to a 9-speed automatic that’s come in for plenty of criticism and warranty work in other FCA products. In Canada, the Pacifica is offered in three trim levels: the $45,890 Touring-L, the $48,490 Touring-L Plus, and the $54,490 Limited.

HOW BIG IS IT?
Compared with its Dodge Grand Caravan sibling, which lingers in previous-generation form, the new Pacifica is an inch longer, an inch wider, and two inches taller with a wheelbase that’s less than half-an-inch longer. Official specs say the Pacifica’s cabin provides 6% more space for humans but lost nearly a cubic foot of cargo space behind the third row. (In the real-world, the cargo area seems slightly larger than before.) Cargo space behind the second row improved by 5%, and maximum cargo volume is down by a little more than 2%. Ground clearance is down by half an inch.

Compared with our long-term Honda Odyssey, the 2017 Pacifica is slightly less than an inch longer and wider, slightly more than an inch taller, and rides on a wheelbase that’s 3.5 inches longer. Not savvy with minivan dimensions? Here’s perspective. The 2017 Chrysler Pacifica is 21 inches longer than Canada’s best-selling car, the Honda Civic. And while this Pacifica weighs 1407 pounds more than the top-trim Civic sedan, the Pacifica’s 287 horses must each tote around only 15.1 pounds, while each of the Civic 1.5T’s ponies is tasked with hauling 16.8 pounds. 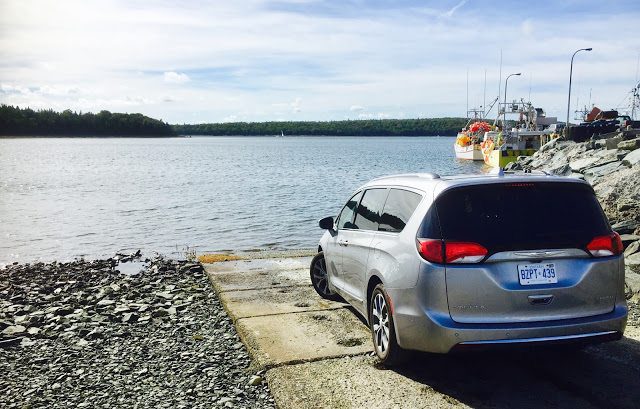 IS IT ANY GOOD?
Many of the same factors that make the 2017 Chrysler Pacifica a hugely impressive vehicle also stand in the way of greatness.

Take, for instance, the 3.6L engine. Hugely powerful and torquey all over, the 287-horsepower V6 is also unrefined, sounding more like a 1999 Pontiac Grand Am’s overhead-valve 3.4L V6 than the Honda Odyssey’s 3.5L powerplant. The Pacifica is quick. In fact, no minivan accelerates to highway speed as rapidly. But you won’t want to plant the throttle for long because the noise – exacerbated by surprisingly little wind and road noise – is sadly raucous.

Likewise, the 9-speed automatic that deserved criticism in the past is now almost undetectable in action. Almost. Minivan transmissions aren’t known for greatness, but like a great automatic should, the ZF-designed, FCA-built 9-speed automatic calls attention to itself precisely by not calling attention to itself. Until for no apparent, with a jolt and a bang and a boom, it hammers itself into eighth gear with enough force to wake sleeping children.

Stow’N’Go seats are a marvel, both when they’re down (both rear rows folding into the floor with ease) and when up (creating a massive well for storage beneath the floor). But they’re still too firm and oddly angled in the second row, while third row comfort is nonexistent and space is cramped compared with the Odyssey and Sienna.

Attempts to move the Pacifica upmarket also involved the installation of extra equipment such as added glass roofs, premium materials, and interesting tech. But the third row sunroof’s shade opens and closes with a dollar store mechanism that does not appreciate it opening or closing. An attempt to make air vents move with Germanic heft resulted in front vents that don’t want to move at all. The 360-degee camera offers great angles, to be sure, but it’s almost useless when there’s too much or too little light. Which is often. The Harman Kardon 20-speaker stereo is part of a pricey package, but there seems little audible point in upgrading audio in a minivan, an empty box where good sound is all but impossible to source. The second row headrests’ entire assemblies came tumbling out of the seat when we attempted to adjust their height. Panel gaps between the door and front fender vary from perilously tight to wide open, although the gaps were consistent from one side of the van to another. Pad-printed USB text in the third row was way off kilter.
Yet many – not all, but many – of the 2017 Chrysler Pacifica’s faults are quickly forgotten when you discover that the Pacifica is simply better than other minivans at doing what all vehicles must do: ferry people to a destination.

The Pacifica is quiet, no small feat in a class full of vehicles which aren’t. It’s quick, not a minor achievement for a vehicle which can seat up to eight, weighs more than 4300 pounds, and consumes less than 10 litres of fuel per 100 kilometres of urban driving. Blessed with plenty of rubber on optional 20-inch wheels, the Pacifica bites into the pavement and takes corners with remarkable eagerness. As a trade-off, you’re expecting brittle ride quality. Yet by the standards of this Pacifica – even with these big wheels – the ride quality of other minivans is busy.

Stow’N’Go plus luxury plus a class-topping dynamic comportment? That’s a winning ticket, or it would be if the Pacifica wasn’t frighteningly expensive and there wasn’t an all-new Honda Odyssey destined for a debut in the next few months.

IS ANYONE BUYING IT?
In Canada, not so much. The Pacifica is scarce on dealer lots and is exclusively a high-dollar option, a  challenger to top-trim Honda Odysseys, Toyota Siennas, and Kia Sedonas.

While U.S. sales of the Pacifica climbed above 7000 units in each of the last three months – the Pacifica and its predecessor owned 20% of the market in August – Canadian sales have only totalled 921 units since the van’s late-March launch.

The U.S. minivan market is only six times larger than Canada’s even though the overall new vehicle market south of the border is nearly nine times the size. While the Dodge Grand Caravan owns 24% of the U.S. market, it claims more than double that share in Canada. With FCA Canada’s Grand Caravan focus, Pacifica sales in the U.S. are 28 times more numerous thus far. 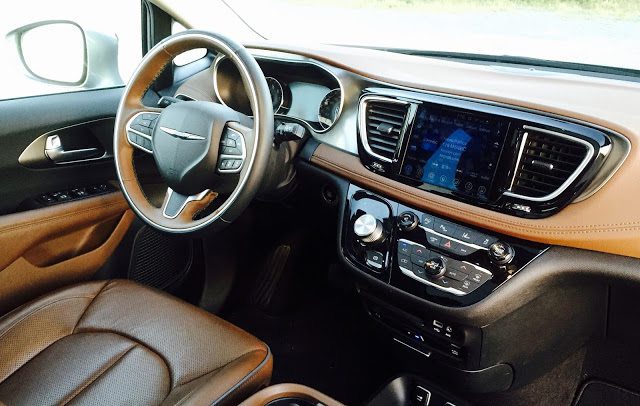 SHOULD I BUY SOMETHING ELSE INSTEAD?
Clearly, if you need to carry a lot of people and stuff on a limited budget, the Dodge Grand Caravan remains an enticing option. When I contacted FCA spokesperson Angela Bianchi on behalf of TTAC earlier this month in regards to the Grand Caravan’s discontinuation, she confirmed it, but would not elaborate on timing. You can get one for a song now. You may not always be able to do so.

Clearly we believe the Honda Odyssey is a minivan worth buying. We’re paying for one with our very own money. Lease offers are amazing, as the Odyssey holds its value exceptionally well.

Similarly, the Toyota Sienna is a high-value option in large part because of much-stronger-than-FCA resale values. The Sienna also has a killer second row and all-wheel-drive availability.

HOW MUCH SHOULD I PAY?
Canadians searching for a new Chrysler Pacifica don’t have to pay $62,340, but they’ll have to pay a lot, regardless. Base prices for the 2017 Pacifica start at $45,890 for the Touring-L, as FCA Canada is, at least for the time being, skipping past the base LX and Touring models available in the United States in favour of pushing affordable Grand Caravans. That’s in keeping with the company’s traditional Grand-Caravan-First approach in Canada, where 90% of of FCA minivan sales are produced by the Dodge.

In the U.S., the base Pacifica LX is 17% less costly than the Pacifica Touring-L, and Chrysler vans account for 47% of FCA minivan sales.

WHAT’S THE VERDICT?
Over the course of a week-long test, a heavily optioned 2017 Chrysler Pacifica Limited stands head and shoulders above its chief rivals as the best minivan you can buy. And so it should.

Especially if that vehicle is the newest design in a field where top-selling rivals are six years old. Especially if it’s quieter, quicker, and just as quintessentially family-friendly – if not more so – than competitors, and even if quality concerns are more tangible.

With caveats, we declare that the 2017 Chrysler Pacifica is the best minivan you can buy. Not until we drive a base or mid-range model without thousands of dollars in options, a Pacifica without 20-inch wheels, can we remove the provisos.

Timothy Cain is the founder of GoodCarBadCar.net, which obsesses over the free and frequent publication of U.S. and Canadian auto sales figures. Follow on Twitter @goodcarbadcar and on Facebook. The Pacifica was supplied by FCA Canada’s press office.