Will Australia’s love for the ute, a phenomenon not seen in other parts of the globe, reignite an El Camino-like passion in North America? General Motors; more specifically Pontiac, certainly hopes so.

Do recall the on-again/off-again life of previous GM car-based trucks on this continent. In fact, take the Subaru Baja as an example of terrible cartruck sales, as well. Subaru wanted to push around 24,000 Bajas (an Outback with no roof continuation, the Outback being a jacked up Legacy wagon) but only managed to shove 30,000 out dealer doors over four years.
Read other Pontiac-related articles here
Holden, General Motors’ Australian subsidiary, is donating their Commodore to Pontiac where you know it as the G8. Expect success, unlike Holden’s last gift to Pontiac, the ill-fated and slow-selling GTO. Assuming rising gas prices but no less need for practical truck usages, the thinking is that General Motors will import the Holden Ute as a G8 cartruck. Sixty extra components help strengthen the longer G8 ute, which makes use of the 6.0L V8 from the G8 GT in the New York concept form.
Other news involving this ute is that it may not be the G8 Ute, at least by name. Pontiac.com/namethiscar will host the public naming of what Pontiac calls a “sport truck utility vehicle”. The site also mentions 3,500 pounds of towing capability and a 1,300 pound payload. 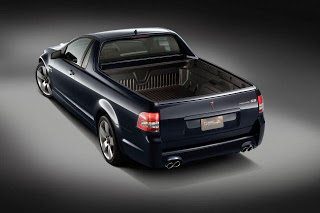