24 hours ago, GoodCarBadCar.net went on high-alert after General Motors made clear that the company was entering Chapter 11 bankruptcy. One post later, and GCBC’s activity skyrocketed. There are plenty of complainers (most of whom don’t understand that these same billions of dollars would be directed towards unemployment insurance if the government didn’t help) and thousands of ignorant souls who simply don’t know better. But in the end, America cares about General Motors.

This has thrown GoodCarBadCar’s shcedule for a bit of a loop. Rather than look at five more of the most Memorable Vehicular Debuts of The Good Car Guy’s era, it seems an ideal time to attempt to discover how and why the “new” GM will be different. Oh yeah, “new” is an important word in GM’s… er, new vernacular. In Fritz Henderson’s open letter posted here, new is even capitalized. So, says Henderson, “the New GM is here to stay”. Also, though the company is appreciative of the Obama administration’s help and doesn’t discount the sacrifice so many Americans and Canadians have made, Fritz believes “our product is our future”. Which is interesting, given The Good Car Guy’s #1 reason GM went bankrupt. Anyway, keep reading for the Five Signs General Motors Has Changed and see if you can manage not to make a joke to your friends about GM being on the Fritz. Ha.
—–
The #5 Sign That General Motors Is The New GM …….. : Hummer is now owned by the Chinese. Yes indeed; expect the sale to go through by the end of September of this year. We don’t know if the mystery buyer is Chinese or not, but few nations have companies willing to spend $500,000,000 on a brand that is distinctly uncompetitive in its largest market.
The #4 Sign That General Motors Is The New GM …….. : Saturns live on as Magna-built Opels. The Aurora, Ontario-based parts maker paid $989,000,000 for Opel; tie-ups with Russia-based OAO GAZ notwithstanding. Magna wants Opel to return to profitability by 2011 with significant increases in market share. Rumour has it that included in Magna’s plan is help for dying Saturn dealers who already share some product with Opel. 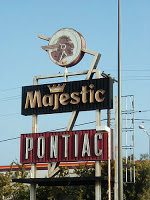 The #3 Sign That General Motors Is The New GM …….. : Pontiac signs come down. Over the last decade, dealerships that weren’t selling multiple GM brands were urged to do so. Typically, that meant Pontiac was sold alongside Buick and GMC. Buick and GMC are surviving – Pontiac is dying. Pontiac/Buick/GMC dealers will become Buick/GMC dealers if they don’t take on Chevrolet and Cadillac, too.
The #2 Sign That General Motors Is The New GM …….. : Your GM car is built abroad. Although the New GM wants to “more efficiently utilize U.S. capacity”, the New GM doesn’t joke around when it comes to increasing vehicle sales in the U.S. of cars built elsewhere. Think China, first and foremost. One doubts that the Bowling Green sticker on your Corvette will be Beijing or Guangzhou anytime soon. However, GM already builds products in the far east that we see as American-made cars here. Why not build them one place, do so for less, and then ship them here?
The #1 Sign That General Motors Is The New GM …….. : You or your friends lose your job(s). Sorry to be so harsh, but listen to New GM’s plans: swing downward from 2008’s 47 manufacturing plants to 34 by the end of 2010 and 33 by the end of 2012. Meanwhile, GM’s salaried North American workforce shrinks from 35,100 to 27,200. Take a look at the table below (click to enlarge) for plant closure timelines. 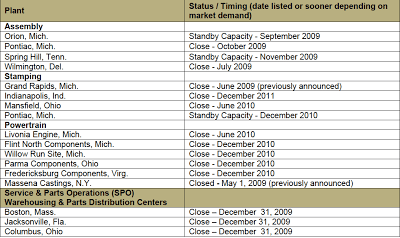