—–
SUMMARY REPORT OF AUTOPSY
Name: General Motors, Pontiac
Date of Birth: 1926
Date of Death: 2010
Age: 84
Body Identified By: Fritz Henderson, Chief Executive Officer at General Motors
Investigative Agency: GoodCarBadCar.net
—–
EXTERNAL EXAMINATION
The autopsy is begun at 10:53 (AST) on Monday, April 27, of 2009. The body of Pontiac is presented after the death knell has sounded but more than a year in advance of its death. At the time, Pontiac was wearing the Torrent, Solstice, G8, G6, G5, Vibe, and G3. The body is that of a normally developed automotive brand with excess girth as evidenced by the Torrent, G5, and G3. Upon removal of the victim’s clothing, an odor of confusion and disarray wafted through the examination room. Strakes, said by witnesses to be called “cladding”, were seen up and down the sides of the victim’s body. On the front, scoops and gills appear to show signs of being present for more than 15 years.
INTERNAL EXAMINATION
Head & Central Nervous System: Cruel and unusual punishment was meted out upon Pontiac for more than two decades as punishment for, perhaps, being John Z. DeLorean’s favourite brand. Mismanagement at the top resulted in a mismatched product lineup. Like placing an 11-year old soccer player in midfield to play with Ronaldinho, both the youngster and the superstar suffer. Thus, the G3 negatively impacted the G8 while not doing itself any good either. 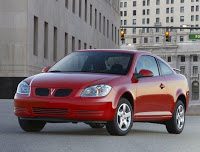 Skeletal System: A General Motors product revival, as seen in the G8 and even the Torrent GXP as well as in other linked-up families like Chevrolet (Malibu), Cadillac (CTS) and Buick (Enclave), shows core strength deep down in the foundation.
Respiratory System: Automotive brands need $$$ to breathe easy. Pontiac’s parent, General Motors, was increasingly reliant on government loans to breathe. Pontiac wasn’t getting enough of that air.
Cardiovascular System: Even if Pontiac had been breathing easily, the blood only pumps if consumers are purchasing in large numbers. In the United States this past January for example, Pontiac sales were 62% lower than in the same period of the year before. The blood was not pumping.
Gastrointestinal System: Not only recently but in the distant past, Pontiac was not being fed the same way as other General Motors brands. For instance, despite Pontiac’s image as GM’s performance brand, it was Chevrolet’s Cobalt that received the SS treatment with all its horsepower and suspension trickery while the identical car at Pontiac, the G5, starved with 150 horsepower whether you wanted more or not. In other instances, too much gas could be a problem. The G8 GXP, a terrific car introduced at the wrong time, suffered from a guzzling mentality that results in using a gallon of gasoline every 13 miles in city driving. Besides all that, indigestion still lingers after trying to swallow the guilt and shame otherwise known as the Aztek.
LABORATORY DATA
Excessive steel and iron. Low in gold, silver, and bronze. No potential for hydrogen or diesel. Thankfully, no neon was ever present. Lacking aluminum and titanium. Bilirubin count was normal.
EVIDENCE COLLECTED
Witnesses say the parent, General Motors, has plans to cut the number of nameplates offered in North America from last year’s 47 to 34 by the end of 2010. Apparently, the sibling which helped Pontiac the most, Holden, will lose $1,000,000,000 per year as a result of Pontiac’s demise. General Motors also plans to save $2,600,000,000 in hourly labour costs by 2010. Also, General Motors has come to grips with the fact that their market share in the USA will likely drop from 19.5 to 18.5 in the near future. GM’s market share in the late 1960s was about half of all vehicles sold in America.
—–
OPINION
Time of Death: 12.01.2010 at the latest
Immediate Cause of Death: Dwindling sales, uninteresting lineup/uninterested public, only enough $$$ to support four General Motors brands (Chevrolet, Cadillac, Buick, GMC)
Manner of Death: Euthanasia
Remarks: General Motors bigshots like Bob Lutz and Rick Wagoner wanted Pontiac to be America’s BMW. After that decision was made, the public was offered a renewed Grand Prix as well as the G6. One wonders, had General Motors decided a decade or more in the past that Pontiac would be America’s Porsche, if cars like the Solstice, G8, and the new Camaro-as-a-Trans Am would have resulted in the niche brand GM said they wanted a few months ago. Pontiac’s history is either ignored, dismissed, forgotten, or not known by the vast majority of 2009’s auto-buying public. Still, attempting to sell excitement and then providing North America with the G3 and G5 was – and will always be remembered as – a big mistake. Indeed, Pontiac’s history necessitated a product lineup that: provided a refined Solstice; made the Camaro a Pontiac and not a Chevrolet; made use of the CTS-v Coupe’s underpinnings as a modern-day GTO; could turn the Volt into GM’s first performance-oriented hybrid; and sold the G8 GT and G8 GXP as an alternative to a similar car that was available at Buick with a V6 only. 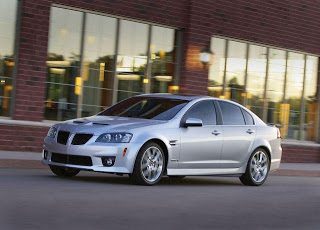