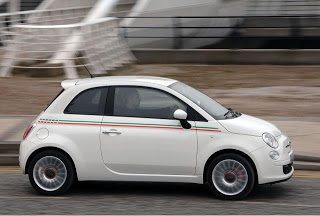 “Sadly ironic” would be a suitable phrase for the likely occurrence of Pontiac being put out to pasture just as Fiat arrives in the barnyard in 2010. Both scenarios are brought on as a result of two once-gigantic companies realigning themselves for an era of much smaller automotive sales in the USA. Of course, Fiat’s arrival will come on the heels of Chrysler’s bankruptcy while Pontiac’s death hits home because General Motors is far too large and needs to shrink somewhere. Or rather, somewhere(s). Oldsmobile is already dead. Hummer, Saab, and Saturn will be very different companies by 2011, as well.

What is it about Fiat that makes it a probable success in North America that wasn’t true with Pontiac? In January, Pontiac sold 9,104 cars, positioning the brand as the 18th best-seller in America that month. Mini sold 2,082 vehicles. Fiat’s 500 – the Cinquecento – is a relatively direct competitor for the Mini Cooper. 20,000 sales per annum seems possible. That’d be about 1,666 for Fiat’s highest-profile car.
The Panda, Grande Punto, and Bravo are also obvious contenders for North America. Rumour has it that Jeep wants the Panda 4×4. GoodCarBadCar wants the Panda 100HP. The Grande Punto is gorgeous but, with the 500 and Panda, would be the equivalent in North America of Honda selling the Fit, a tall Fit, and a small and stylish Fit. Possible? Yes. Possibly successful? Maybe. Possibly superflous? Yes.
The Bravo, if trunked, would be thrown into the ring with the Honda Civic, Toyota Corolla, Chevrolet Cruze, Ford Focus, Mitsubishi Lancer, Suzuki SX4, Hyundai Elantra, Kia Forte, Nissan Sentra, and Mazda3, among others. Its novelty factor rests upon one item: its badge; which for some people is actually a turn-off. It is not a class leader in Europe as it stands.
In other words, could Fiat sell 10,000 cars per month in America? Of course, Pontiac’s problem wasn’t the 9,104 cars sold in January. It was the fact that the 9,104 figure was 62% lower than the sales stat from January of ’08. Importing Fiats to North America is a much more in-depth process than the American media wants to make it out to be. President Obama doesn’t simply hand a pen to the UAW, Canadian government, Treasury department, and Fiat boss Sergio Marchionne for us to see 500s and Pandas appearing in New Jersey.

Crash tests, engine/emission certification, dealer set-up…. all of these things must happen. And whether they can be fast-tracked or not, these things take time and LOTS of money. Thanks to General Motors, Fiat made $2,000,000,000 a few years ago just for GM not to buy it. $2B sounds like a lot. Fiat, however, is a volume player everywhere else. Volume in America should mean 10,000+ sales per month. If Fiat wants to play niche like Mini or smart or even luxury brands like Audi or Porsche, the prices will rise. Then Fiat in North America won’t be the value brand it is everywhere else. And after the novelty wears off, nobody will pay Mini Cooper prices for a Fiat 500.
Is this an argument against the potential success of Fiat? Just because Pontiac died, Fiat will too? Of course not, the brands have little in common. Nonetheless, a brand that failed here once and failed miserably in many other parts of the globe multiple times over isn’t the knight in shining armour the Obama administration (and Cinquecento lovers) would lead you to believe. Fiat isn’t bagging Chrysler out of charity, after all. It’s a business decision. Why would Fiat take on an obvious charity case if Fiat didn’t need to? Ah. Perhaps Fiat needs Chrysler, if not as much as Chrysler needs Fiat, at least enough to make Marchionne look more seriously at Opel possibilities, too.