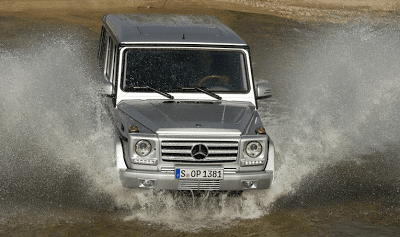 Mercedes-Benz, BMW, and Audi are the next obvious candidates for inspection after yesterday’s profile of the Japanese luxury sales battle in America, a battle Lexus repeatedly wins with ease.

Sans Sprinter, Mercedes-Benz USA is outselling BMW by 1245 units through the first four months of 2012. Audi trails BMW by 41,620 sales – at this stage last year Audi was 36,016 sales behind BMW. Their year-over-year percentage gains are all but identical, but that 16% bump equals 11,194 more sales for BMW; 5590 more for Audi. Mercedes-Benz USA, up 18% through the first four months of 2012, has found 13,805 more buyers than managed to at this point a year ago. Granted, 1331 of those extra sales have been Sprinter vans, the majority of which we can assume are commercial vehicles. 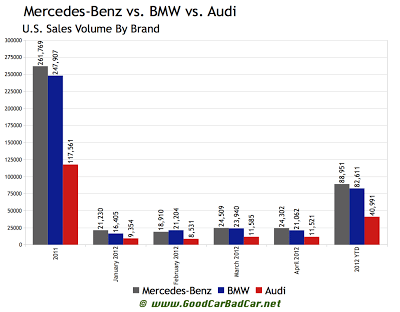 Twenty, maybe even ten years ago, Audi wasn’t nearly so deserving of being included in a Mercedes-Benz vs. BMW headline. The A4 still doesn’t sell as well as the C-Class or 3-Series. The E-Class and 5-Series crush the A6, despite the fact that U.S. A6 sales have doubled this year. The Audi Q5 does, however, mix it up with the X3 and GLK. And the admittedly much-less expensive Audi A7 is 401 sales ahead of the CLS-Class through four months. All the year-to-date numbers for 34 Mercedes-Benzes, BMWs, and Audis are visible after the jump. Together, the 33 non-Sprinter vehicles in the list account for 13% of the nameplates on sale in America and 4.6% of the American new vehicle market’s volume.

Historical monthly and yearly sales figures for each and every model on sale in North America can be accessed through the first dropdown menu at GoodCarBadCar’s Sales Stats home. Each and every manufacturer was ranked by April 2012 volume earlier in the month, just as they will be ranked by May volume on Friday, June 1. The 3-Series was the 43rd-best-selling vehicle in America in the first one-third of 2012, as you’ll see when you scan this forever long list of 255 automobiles. Click the above chart for a larger view.