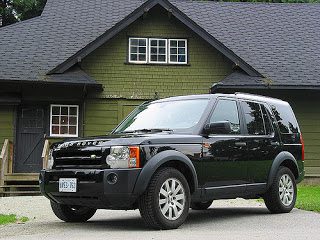 Priced a handsome $40,000 less than its stablemate, the Range Rover, Land Rover’s LR3 impresses right off with it’s heritage. This is the maker that brought the Defender and the aforementioned Range to market; not to mention the Discovery, which has been superseded by the LR3. A heritage of what, you ask? Off-roading, my friend. No silly soft-roaders these, not cute-utes, not simply made for climbing a curb in the urban jungle, but to take you and your’s through the Sahara and down the shores of the Amazon. Since it’s a Land Rover, you can count on at least some measure of tough-terrain alacrity. And with the LR3, Land Rover has made a vehicle with off-road skills and limits far greater than the skills you will drive it with and limits you will drive it to.

But what’s this? A Landie that copes with a twisting road? It can’t be. Well, the Range Rover and Freelander started the trend, the LR3 continues it, and the Range Rover Sport takes it to a whole ‘nuther level. Not an out-and-out sporty SUV a la Infiniti FX, BMW X5, and Porsche Cayenne, but simply capable on road, something that was not frequently said of the previous Discovery, with its odd wheelbase/track width/height proportions. I was surprised at how little body roll there was in the LR3, but far more impressed with the high-speed stability. It’s easy to think you’re putting along, when you’re actually flying.

This Land Rover has good on-road manners, the hefty weight is felt; but controlled and managed. I wouldn’t really need a whole lot more power, a request for more but not a demand. The LR3 is not slow. The 4.4L works smoothly and somewhat quietly. There’s a good firm brake pedal and weighty steering that is naturally not feelsome. Moving inside, you’ll feel quality switches, like the control stalks and rubberized volume button. The only interior part that doesn’t support this claim is the shifter gate, which is nonetheless modern. Even the blinker noise sounds exactly as you would expect in a Land Rover.

They’ve thought of everything, much of which I don’t have room to tell you, suffice to say that the key fob can survive under water, the two-peice tailgate curves to allow you to reach in, and well…. every piece of metal and plastic was first considered, then produced.

Perhaps the niftiest feature in the LR3 is the Terrain Response system . Select your mode of driving from five options: on-road, snow, mud, sand or rocks, and the TR will calibrate the differentials, throttle mapping, and any other electronic doo-dad to the optimal setting. Land Rover has done extensive testing so that the thresholds for each setting will keep you safe and secure. Even if you don’t do any serious rock-crawling, Land Rover has still set up the vehicle to be the safest and most capable it can be when you select your type of road. And it’s easy; just turn the knob, no computers to sort through at all. That being the case, the only thing I adjusted in my light-duty off-roading was the adjustable ride height feature of the air suspension, which allowed me more leeway when traversing a particularly large dip near the indoor soccer field on the Mainland Commons.

I’ve heard it said that the LR3 doesn’t offer the upscale luxury ambience the Range Rover does. Considering the price gap, I wonder what people expect. The cheaper brother does well. There are two fixed glass roof sections for the rearmost rows, and a normal sunroof for those in the front. Seating is stadium style as you move to the rear, allowing both the second row and third a better view. Optionally, a navigation system allows you to find your way back off-road when there are no maps by leaving Hansel and Grettle-like droppings along your route. (Land Rover calls them waypoints.) A stereo system by harmon kardon is specially tuned to the acoustics in the Land Rover. From 9 to 13 speakers, 240 to 550 watts, a 6-CD changer and input capability for your iPod, this is indeed specially tuned. Naturally there’s power everything and lots of leather, and if you’re used to a Discovery, you’ll like the space in the LR3. 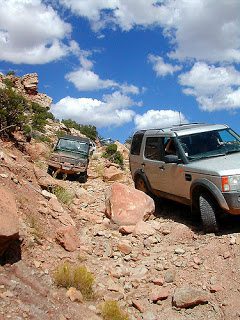 In the end, how do I characterize the LR3? (See important link here)Well, it’s far more than an off-roader, and with its boxy industrial look it carries on well from the Disco, with a 300 bhp V8 it moves along alright, and it handles pretty much any road you throw at it with poise. But whereas the Discovery, often due to faults, had such character; and where the Range Rover has such character because of its position atop the SUV elite, the Land Rover LR3 stands out for another reason. Yes, it is a Land Rover through and through, but it is the all around competence that characterizes the vehicle and thus wins me over. (I SAID, see important link here)