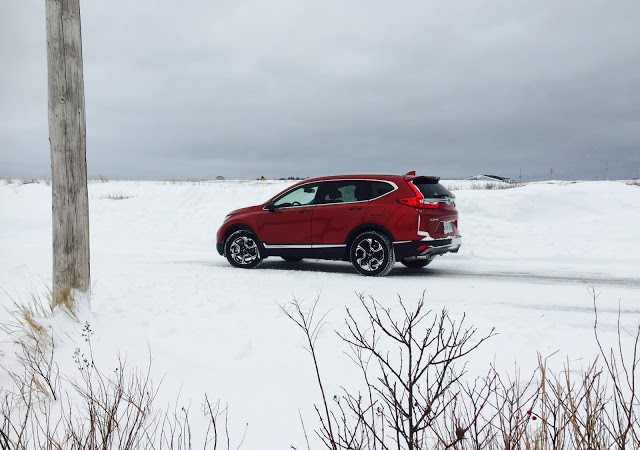 I am not wowed. I do not stand here in awe.

My mouth is not agape. My knees are not weak. My heart does not need to be stilled.

The Honda CR-V, even brand new as a 2017 model in its fifth-generation form, is not the kind of vehicle that can wow you; it doesn’t have the potential to blow your mind.

It’s not a CRX Si or a Civic Type R, let alone an S2000. If you want more power or three pedals or low-profile tires, look elsewhere.

So my socks have not been knocked off.

Yet rarely have we spent a week with a manufacturer-supplied test vehicle that induced such a high level of automotive contentment. In the same way in which a Mazda MX-5 Miata entirely fulfills its mission, the way most modern light-duty pickup trucks go above and beyond the call of duty, the way most minivans make life so easy, the 2017 Honda CR-V Touring is precisely what a Honda CR-V is supposed to be.

At GCBC, we don’t shy away from voicing our complaints. But in order to take issue with the all-new CR-V, one must search long and hard for problems. The search is largely fruitless.

WHAT IS IT?
Honda began building the first CR-V in 1997. Two decades later, with three more generations of CR-V here and gone, the fifth Honda CR-V bowed for the 2017 model year. It’s not the most attractive CR-V ever, but it’s already beginning to cement a reputation as the most popular. 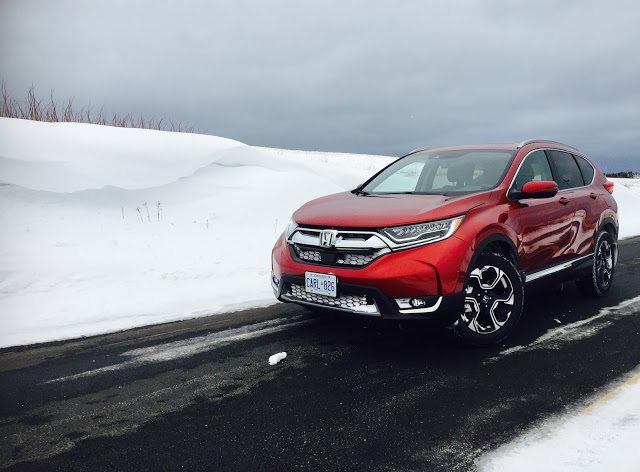 In Canada, where the CR-V is assembled, all 2017 CR-Vs are equipped as standard with the Civic’s optional engine, a 1.5L turbocharged four-cylinder that makes 190 horsepower and 179 lb-ft of torque, the latter plateauing just above idle.

Aside from the entry-level LX, all CR-Vs come standard with all-wheel drive. Together, HondaSensing and AWD add $2800 to the cost of a basic LX.

$2300 higher up the ladder, the $37,115 EX-L adds leather, a heated steering wheel, a power tailgate, heated rear seats, power for the passenger seat, and memory for the driver’s seat.

To GCBC Towers last week, Honda Canada delivered a 2017 Honda CR-V Touring, priced just a hair under $40,000. At $39,915, the sunroof is panoramic, the touchscreen adds navigation, the audio is upgraded, and there’s blind spot monitoring with rear cross traffic alert.

HOW BIG IS IT?
Not much bigger than it’s ever been before on the outside, the CR-V is nevertheless far more spacious inside today than it was twenty years ago.

The wheelbase of the new CR-V has grown by little more than an inch in twenty years, overall length is up by three inches, width is up by a more significant four inches, and the newest CR-V is less than an inch taller than the oldest CR-V.

Despite those modest increases, the 2017 Honda CR-V has 4% more passenger volume and 32% more space for cargo than the 1997 Honda CR-V.

The one utility vehicle that has the capability of selling more often than the CR-V, Toyota’s RAV4, isn’t quite as long as the CR-V but offers marginally more passenger space and marginally less cargo volume. Both stand out as leaders of the pack in terms of space efficiency in their segment.

DOES IT WORK?
Perhaps an easier question to answer: In which ways does it not?

The 2017 Honda CR-V does not yet offer the infotainment unit from Honda’s next-generation Odyssey minivan, a system already revealed that won’t be featured in dealers until the Odyssey arrives later this spring. With this older system, start-up time is a slog, causing long waits to select climate control settings afte you turned the CR-V on, for instance. And while Apple CarPlay may improve upon the antiquated and sometimes convoluted Honda system in normal operation, you’ll have to be corded to do so. We don’t all want that.

Honda also doesn’t want you to have any choice when it comes to the CR-V’s powertrain. You will have this (admittedly inconspicuous) continuously variable transmission and you must not ask for anything more than the (admittedly sufficient) 190 horsepower. You’d rather accelerate onto the highway with the Ford Escape’s 2.0L EcoBoost and six-speed automatic or the Subaru Forester XT’s 2.0L turbo and CVT, but you won’t soon get an alternative from Honda, which sells all the CR-Vs it needs to without certifying another powertrain.

And while the cabin is generally hushed, the ticky-ticky-tick-tick at idle gets old fast, and the general silence of the interior highlights whispering wind noise at the top of the A-pillar on the highway. You also may prefer to tidy up the front end design and choose wheels that at least one individual in the human race find attractive.

But in every other regard, there are no problems to speak of.

For me, the CR-V test starts with the rear seat’s lower anchors. While at first they seem too hidden behind the seatback, your child’s seats will go in without a fuss, aided by plenty of leg and knee room so you can make room for yourself during installation. Honda keeps the rear floor fairly flat, though three-across seating is still going to be difficult if you’re trying to squeeze an adult in between two child seats: it’s not a minivan.

Front seat comfort is bolstered by very adjustable seats, at least in Touring trim, that provide four-way lumbar support. Visibility is excellent in all directions. Ingress/egress is predictably ideal for humans of nearly every height. Controls are nicely weighted – there’s even a volume knob – and gauges are easily decipherable.

Loaded up for winter adventures with a Stiga GT Snowracer and a big-wheeled Baby Jogger Summit X3, there’s cargo room to spare. And my, did we ever need to be prepared for winter, with nearly one metre of snow falling in less than a week during the CR-V’s visit. 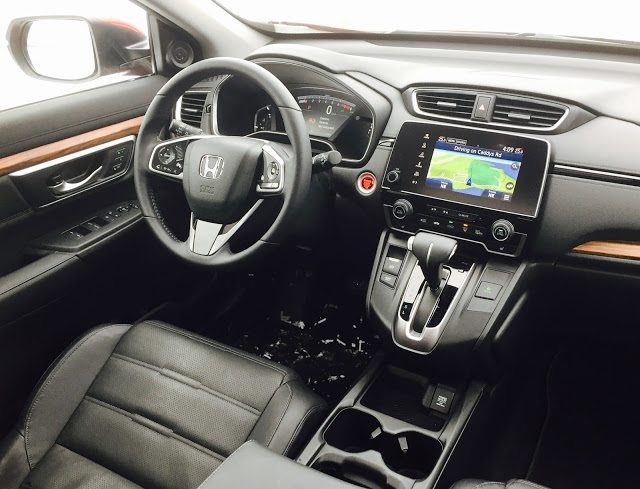 Thanks to the installation of Bridgestone Blizzaks, we weren’t slowed by winter, lopping an additional 400 kilometres onto the CR-V’s odometer. Despite the cold, snowy, urban environment and the winter tires, we still managed to consume only 8.5L/100km in the CR-V, outperforming its city rating. We weren’t trying to be eco-minded. The CR-V is just powerful enough to make acceleration-for-the-fun-of-it worthwhile. While I’d still prefer the positive shifting of, say, the Honda Ridgeline’s six-speed, this CVT isn’t offensive, and to claim otherwise just to bolster your anti-CVT cred would be silly.

Despite losing a measure of its sharpness to the Blizzaks, the CR-V handles well thanks to a sub-3600-pound curb weight and nicely weighted steering. It’s not a corner carver in the vein of Mazda’s CX-5, to be sure, but ride quality is superior to the CX-5 and all of the Honda’s other rivals, as well. You’ll hear a minor thwack on rough roads, but it’s doubtful you’ll feel it.

It’s doubtful you’ll feel much at all. The CR-V assures occupants of a decidedly isolated experience. If you want the most athletic small crossover, this ain’t it. But the CR-V marries exceptional rough road behaviour with above-average mid-corner composure in admirable fashion.

IS ANYONE BUYING IT?
Everybody’s buying it.

The CR-V is a traditional top seller south of the border – America’s best-selling utility vehicle in five consecutive years – and an intermittent monthly leader in Canada. But this new generation aims to take things up a notch.

January 2017, the first full month for the new model, marked the highest January sales output in the nameplate’s history both north and south of the border, and by a wide margin.

The CR-V was Canada’s sixth-best-selling vehicle overall in January – only the Honda Civic and four pickups were more popular. In the U.S. last month, the CR-V ranked fourth overall, trailing three pickup trucks but outselling all other utilities and all passenger cars.

SHOULD I BUY SOMETHING ELSE INSTEAD?
Let’s assume you want to spend less than $40,000 on a SUV/crossover and don’t want to pay a premium for a luxury badge, losing equipment and space in the process. What are your options? There are too many to list.

The CR-V is decidedly more refined than most rivals, a top-tier player in terms of efficiency both with fuel and space, and comes equipped with abundant safety gear at a low price point. It’s a difficult full meal deal with which to compete.

The Ford Escape offers more power and more engaging ride/handling, but doesn’t feel as well built and isn’t nearly as spacious. Toyota offers a legendary reliability reputation, but the RAV4 otherwise feels behind the times. Mazda’s CX-5 nicely blends interactive handling with good looks and fuel efficiency, but again, the CR-V is simply the quieter and more comfortable vehicle.

Wait a day or two, however, and there’ll always be another new compact crossover around the corner: a new Volkswagen Tiguan, a new diesel-powered Chevrolet Equinox, a revamped diesel-powered CX-5.

‘;
document.getElementById(“vinads_div”).innerHTML = lfAd;
}
});
HOW MUCH SHOULD I PAY?
The 2017 CR-V Touring with which we spent a week is the very same CR-V that sits at the bottom of the lineup, priced at $31,315 with AWD. Sure, there are $8600 worth of missing features, but it’s the same quiet, composed, efficient, spacious, and sufficiently powerful vehicle in LX AWD guise as it is here in Touring trim.

And it’s not under-equipped in 2017. The CR-V LX finally has proper alloy wheels, so it doesn’t look like poverty spec.

WHAT’S THE VERDICT?
I didn’t take the long way home from the grocery store. I didn’t turn back for a second glance. My life was not transformed by moving the shifter from D to S.

The CR-V is not the kind of vehicle that ought to be remembered. But now with the week over and a replacement installed in our driveway, how can I quickly forget a vehicle so free from faults?

Honda’s fifth-gen 2017 CR-V isn’t perfect. But its flaws are minor and would be easily remedied. Making family transportation easy shouldn’t be that difficult, but in this segment, no automaker does it better than Honda.

Timothy Cain is the founder of GoodCarBadCar.net, which obsesses over the free and frequent publication of U.S. and Canadian auto sales figures. Follow on Twitter @goodcarbadcar and on Facebook. The CR-V was supplied by Honda Canada’s press office.