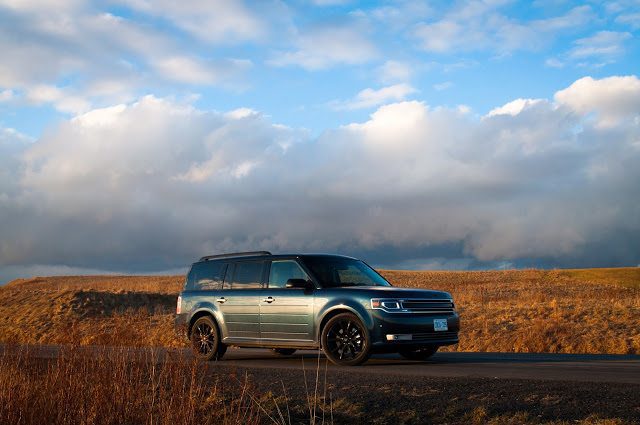 Since Ford began building the first-generation Fairlane Concept-inspired Flex in Oakville, Ontario, I’ve been blessed by the birth of seven nephews and nieces plus two of my own children.

It takes time for that many kids to be born.

In other words, the Flex has been around for a while. Built off a platform altered from its Freestyle/Taurus X days – a platform initially inherited from the first-generation Volvo S80 of the late 1990s, the 2009 Ford Flex entered production in June 2008.

Ford updated the Flex with an optional EcoBoost twin-turbo V6 in 2010, altered the styling for the 2013 model year, and added SYNC3 infotainment for 2016. By and large, however, the Ford Flex that was delivered to Canadian consumers prior to the, er, delivery of another nine children in my family – you may have read about the latest. – is the same Ford Flex available after the delivery of those nine babies.

Fortunately, the inherently positive aspects of the Ford Flex’s boxy design are just as obvious in 2017 as they were in 2009. With only one or two model years left before Flex production ends, Ford Canada delivered a 2017 Ford Flex Limited EcoBoost to GCBC Towers so we could discover if the good outweighs the bad.

WHAT IS IT?
Ford Canada’s soon-to-grow utility vehicle lineup currently includes the entry-level Escape (perenially one of Canada’s top-selling SUVs/crossovers) the larger Edge, the Explorer (Canada’s top-selling three-row utility vehicle), the body-on-frame Expedition (replaced for 2018), and this Flex, essentially a traditional tall wagon with NBA levels of headroom. 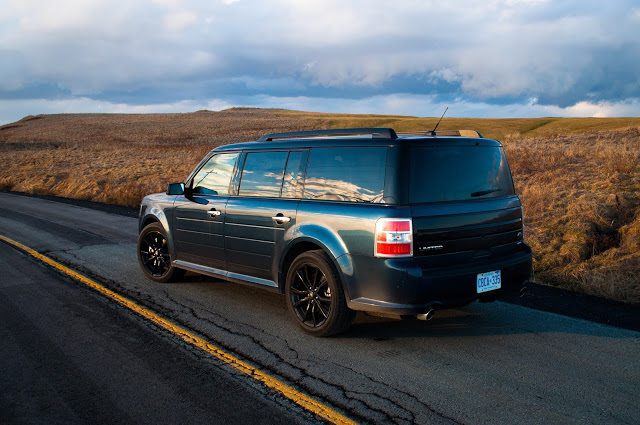 The Flex is tall, at 68 inches, but it’s also low, with only 5.9 inches of ground clearance. Its boxy shape masks minivan-like length of 202 inches that makes the Flex substantially longer than vehicles such as the Toyota Highlander, Honda Pilot, and new GMC Acadia.

In fact, the Flex is about as long as the Chevrolet Tahoe, which places the Flex in a strange zone where few crossovers live. This isn’t a rugged, truck-based 4×4 that can tow large RVs.

Slotting into a narrow niche has proven lucrative for vehicles such as the Subaru Outback and Jeep Wrangler. The Flex, on the other hand, is consistently unpopular and rarely sought after despite its high (or low, depending on your perspective) style quotient.

It’s on the $47,489 Flex Limited, where all-wheel drive is standard equipment, that the twin-turbocharged 365-horsepower 3.5L V6 is part of a $6800 303A package, including active park assist, adaptive cruise, heated steering wheel with power tilt/telescope, power-folding third-row seats, plus heated and cooled front seats.

It’s discounted at the moment by $750, if that makes the pill any easier to swallow.

HOW BIG IS IT?
Here’s how the Flex fits into the Ford utility vehicle hierarchy. The Ford Escape is 178 inches long with 2795 litres of passenger volume and 962 litres of cargo volume behind the rear seats.

One rung up the ladder, the Ford Edge is 188 inches long with 3225 litres of passenger volume and 1111 litres of cargo volume behind the rear seats.

The 198-inch Explorer adds a third row, driving passenger volume up to 4295 litres in all – cargo volume behind the second row is 1243 litres.

In the outgoing Ford Expedition Max, the elongated Expedition, length stretches to 221 inches while providing 4765 litres of space for passengers in three rows or two rows of space and 2421 litres of cargo volume.

The Flex, meanwhile, is 19 inches shorter than the Expedition Max but only loses 7% of the Expedition’s passenger volume and 3% of its cargo volume aft of the second row. 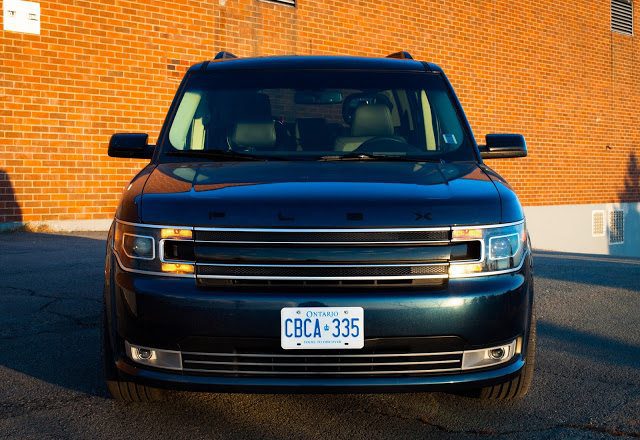 DOES IT WORK?
For a family, yes.

At Circuit Mont-Tremblant, no.

In your wallet, probably not.

Let’s take them one at a time. The Flex doesn’t have the sliding door benefits of a minivan, but the second row is expansive and child seats are easy to install. Flipping or folding the Flex’s split second row isn’t as magically straightforward as in some newer vehicles – the seats are very fixed – but there’s sufficient space out back and room to get back there, too. Abundant headroom and light pouring in through various sunroofs only adds to the feeling of space you just won’t get in other non-minivans. Add to this the lengthy feature count and the Flex is a terrific place to spend time. Indeed, if Ford could get rid of the wind noise that inevitably accompanies a brick-like shape, upgrade some interior materials, and extinguish the early signs of creaking and groaning around the rear doors, the Flex would be downright refined.

Refined and quick. Though there’s off-the-line hesitation caused by the Flex’s excessive 4828-pound curb weight and the inertia of 20-inch wheels and turbos spooling up, the hesitation is brief. And then you’re met by prodigious power and a six-speed automatic transmission that thankfully hides in the background, going about its business wisely and never drawing attention to itself. Expect acceleration from rest to highway speed in little more than six seconds, but you’ll really notice the EcoBoost’s thrust while overtaking from 70-120.

The throttle pedal only takes you so far, however, and when it comes time to hustle the Flex down a road you’ve managed to enjoy in a Honda Pilot, well, you won’t. Unhappy changing directions, the Flex rolls like the 4828-pounder-with-no-athletic-intentions that it is. The steering is numb, brake feel isn’t terribly progressive, and there’s little about the Flex that actually encourages swift progress. As a highway cruiser with enough gumption for easy overtaking, the Flex EcoBoost is outstanding, and it’d only be better on smaller wheels with less aggressive tires. But it’s not the low-slung sporting crossover you may be expecting.

The Flex also doesn’t live up to the Eco part of its EcoBoost badge. We averaged 14.7 L/100km over the course of a high-mileage week, and you shouldn’t expect better. The Flex is rated at an even worse 15.7 L/100km in the city. An F-150 with the 3.5L EcoBoost won’t drink as much.

(Want more on this Flex? We reviewed the same Limited EcoBoost with a U.S. bent over at The Truth About Cars.)

In January, the Flex accounted for 3% of the Ford SUVs sold in Canada and the United States. 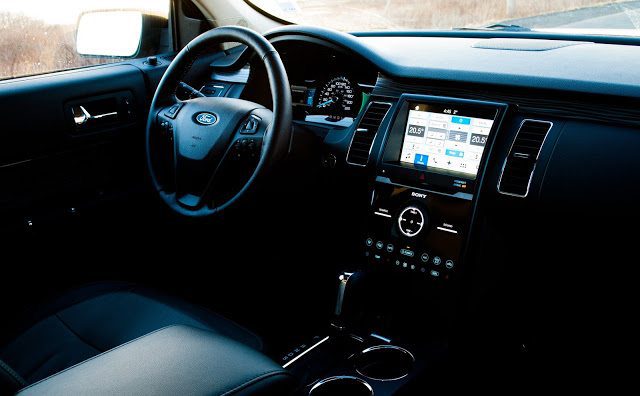 SHOULD I BUY SOMETHING ELSE INSTEAD?
If you desire a vehicle that feels newly designed, you must. If you’re looking for a vehicle that isn’t a minivan, a Chevrolet Suburban, Ford Expedition Max, or a Dodge Durango, but you require the sort of space those vehicles offer, the Ford Flex is quite likely the answer.

If you can sacrifice some space, consider the Mazda CX-9, which is an absolute joy to drive and wins points on style, as well. At this high-end price point, you could consider the Suburban/Yukon XL or the new Nissan Armada. There are reliability concerns with the Dodge Durango, but it offers big league space and available Hemi power.

Or you could wait for the 2018 Ford Expedition that Ford revealed outside the Dallas Cowboys’ AT&T Stadium earlier this week.

HOW MUCH SHOULD I PAY?
If you require EcoBoost levels of power, you’re going to need to spend more than $50,000. But the regular Flex will surely merge onto the highway just fine with 287 horsepower.

‘;
document.getElementById(“vinads_div”).innerHTML = lfAd;
}
});
WHAT’S THE VERDICT?
You can be old and still very good at what you do. Tom Brady. Tony Bennett. Cheese. The Grand Canyon. Porsche 911 964s.

More likely, however, you can be old and still be very good at the things you do best.

Approaching its ninth birthday, the 2017 Ford Flex doesn’t have the seat-sliding mechanisms of newer competitors. It’s overweight, which results in intolerable fuel economy and acceleration that won’t wow you as much as you thought 365 horsepower would. There are odd buttons and excessive wind noise and a structure that can’t handle the harsh impacts created by these 20-inch wheels.

But the Flex is huge inside. It’s still the individualistic choice, standing out from the pack like a Mustang GT in a parking lot full of Camrys and Altimas. And the Flex, at least for the moment, is still modern enough; just sufficiently modern to be worthy of consideration.

Particularly if your local Ford dealer is willing to play ball on the extraordinarily high EcoBoost base price.

Timothy Cain is the founder of GoodCarBadCar.net, which obsesses over the free and frequent publication of U.S. and Canadian auto sales figures. Follow on Twitter @goodcarbadcar and on Facebook. The Flex was supplied by Ford Canada’s press office.