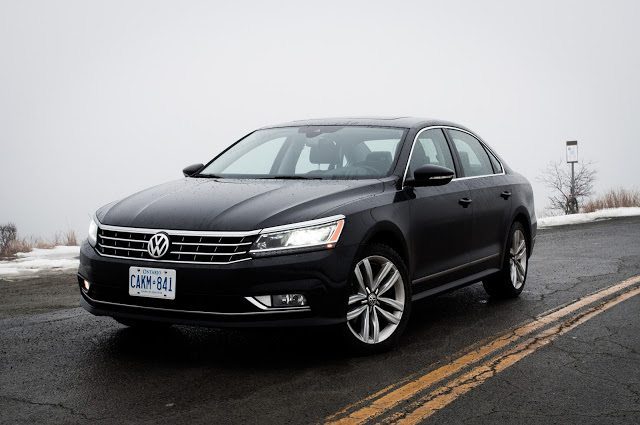 This is a review of the 2017 Volkswagen Passat V6.

That’s right: it’s not a diesel (obviously), not an artificially aspirated inline-four, not a hybrid. This sixth-generation Passat, delivered to GCBC Towers by Volkswagen Canada, is equipped with a six-cylinder powerplant breathing on its own: no turbos, no superchargers, no battery-electric whizbang.

A vee-shaped six. Six cylinders, arranged in the shape of a V, or as close as Volkswagen wants the six cylinders to resemble a V in its narrow-angle VR6 tradition.

The V6 engine is certainly no longer normal, not in a class of midsize cars where the overwhelming majority of buyers choose a four-cylinder model and roughly half of all competitors don’t even offer a V6 as an upgrade.

Economics, regulations, marketplace trends, and technological advancement have conspired against six largeish cylinders. A torquey turbo inline-four like the 2017 Volkswagen Passat’s own 1.8T will cost less, pollute less, satisfy the demands of most buyers, and surprise many with its real-world grunt.

And yet the six-cylinder lives, not only here in the 2017 Volkswagen Passat Highline, but also in the Toyota Camry, Honda Accord, Nissan Altima, Subaru Legacy, discontinued Chrysler 200, and in a new turbocharged Sport version of the Ford Fusion.

Those nameplates accounted for seven out of every ten midsize car sales in Canada last year.

But we know only a fraction of those sales were produced by cars with V6 powerplants. For good reason.

We’ve reviewed the Volkswagen Passat before. That diesel-powered car is no longer available, and some members of the competition have moved the midsize game on. Indeed, the Passat has been refreshed since then, as well. Nevertheless, unlike a typically thorough GCBC Driven review, this review focuses on the V6 engine option, rather than discussing the Passat as a whole.

You can, however, summarize the car this way. Bland styling masks a composed chassis that exhibits some of the tendencies of a hefty, traditional, American full-sized car: dead steering on the straightahead that’s slow to react, just a hint of float when you want the car to button down during a mid-corner rise, too much body roll to properly battle the athleticism of the Mazda 6 or Honda Accord Sport. Torque steer, fortunately, is largely curtailed – 280 horsepower makes its way to the pavement fairly easily. The back seat is huge. The non-CarPlay tech interface is old but straightforward. From the typically comfortable Germanic seat, thick bolsters and firm cushions, visibility is excellent. Some of the newer safety tech added to this older design causes the Passat to feel older – they’re not easily altered through strange instrument cluster sub-menus. 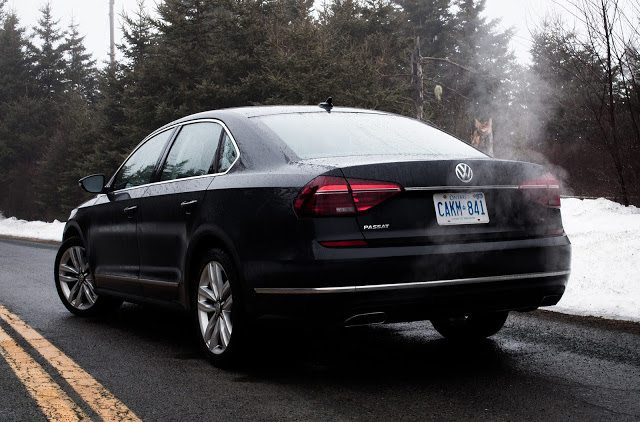 1.8T
15 years ago, it seems a perfectly rational choice to consider a 2.3L-powered Honda Accord but end up thinking more power – not a lot more power, just a 33% jump – would be wise. Rather than 150, you got 200. As was common at that time, the Accord’s V6 was available across much of the lineup.

The whole four-cylinder/six-cylinder continuum has since been shaken up. In the 2017 Volkswagen Passat’s case, the 3.6L V6 produces 110 more horsepower than the 170-horsepower 1.8L turbocharged four pot, a 65% increase.

The 1.8T that so impresses in the much smaller Golf isn’t about to feel pedestrian in the larger Passat, but the story of a comparison between the Passat 1.8T and the Passat 3.6 is really a study in constrasts. With the 1.8T linked to a traditional six-speed automatic, acceleration from rest to 100 kmh requires a perfectly reasonable 7.8 seconds, according to Car And Driver. Aided by a torque peak (184 lb-ft) at an extraordinarily low 1500 rpm, the Passat 1.8T leaps from 80-110 in a tick under six seconds.

Yet with Volkswagen’s quick-shifting six-speed dual-clutch automatic transmission installed and with 40% more torque, the Passat V6 shoots from nought to highway speed in 5.7 seconds and from 80-110 in four seconds. Those were recently the times of genuinely fast cars. Even now, it’s a level of acceleration Volkswagen’s Golf GTI can’t quite match.

The 1.8T is still the far more conventional choice. Fuel consumption is 16% lower, for starters. Most family sedan buyers don’t care about sports car-baiting acceleration. Most importantly, the 1.8T is the exclusive engine for the $27,540 2017 Passat Trendline+ and $32,540 2017 Passat Comfortline, and the standard engine in the $37,540 2017 Passat Highline.

RIVALS
Beyond the Passat 3.6 V6’s lesser sibling, there are numerous alternatives made available by Volkswagen’s competitors. Other than the discontinued Chrysler 200’s 295-horsepower V6 – the 200 hardly seems like the prototypical Passat buyer’s substitute – and the rare AWD beast that is the $44,038 2017 Ford Fusion Sport’s twin-turbocharged 325-horsepower 2.7L EcoBoost V6, the Volkswagen’s 280 horsepower makes the Passat a segment leader.

The top-selling Toyota Camry offers a 268 horsepower 3.5L V6, the Honda Accord’s 3.5L V6 makes 278 horsepower, and the Nissan Altima’s 3.5L V6 is a 270-horsepower unit. All accelerate with similar vim and vigour, although the Honda’s engine is part of a better overall dynamic package, the Nissan’s V6 is linked to a disappointing continuously variable transmission, and the Camry’s V6 will shortly appear in an all-new design.

Subaru also offers a six-cylinder, a horizontally opposed boxer unit to be precise, but we’ve been disappointed by its output in the past, albeit thankful for an all-wheel-drive system that helps get the power down.

Only at Ford, where the Fusion Sport stands out for no shortage of reasons, does a core mainstream midsize car make a V6 such an expensive proposition. And at Ford, there’s a 240-horsepower 2.0L turbocharged four-cylinder that now serves as a mid-grade option, priced from $30,738.

The Passat V6, therefore, is a costly proposition.

Moreover, the Passat does a passing Americanized impression of a de-luxed, upsized Audi A4.

Forget the money. Forget the junior Passat and the Passat’s opposition. What’s this V6 engine actually like when the throttle pedal is depressed?

‘;
document.getElementById(“vinads_div”).innerHTML = lfAd;
}
});
IN ISOLATION
First, stand behind the car while you ignite the Passat’s 3.6L V6 using the remote starter. You’ll quickly be alerted to a surprisingly intoxicating burble. Subdued German styling, yes. But subdued German symphony? Not so much.

You won’t hear much of the V6’s burble inside the quiet cabin, but there’s no shortage of snorty breathing when the Passat is under the gun. 280 horsepower rarely feels slow in any machine, but tasked with motivating fewer than 3600 pounds and linked to a rapid-fire transmission, 280 horsepower is copious.

In fact, the six-speed DSG can be more soul stirring if you drop the shifter from D into S, where low gears are held for as long as the Passat considers it remotely possible that more power may soon be required. It’s an aggressive Sport mode, and not unwelcome when you’re truly under the gun.

But to be honest, if that’s the kind of driving you plan to participate in very frequently, a true sports sedan is probably going to reside much farther up your alley.

The 2017 Volkswagen Passat’s 3.6L V6 is a sports sedan’s engine, but it’s under the hood of a traditional American family sedan.

Timothy Cain is the founder of GoodCarBadCar.net, which obsesses over the free and frequent publication of U.S. and Canadian auto sales figures. Follow on Twitter @goodcarbadcar and on Facebook. The Passat was supplied by Volkswagen Canada’s press office.