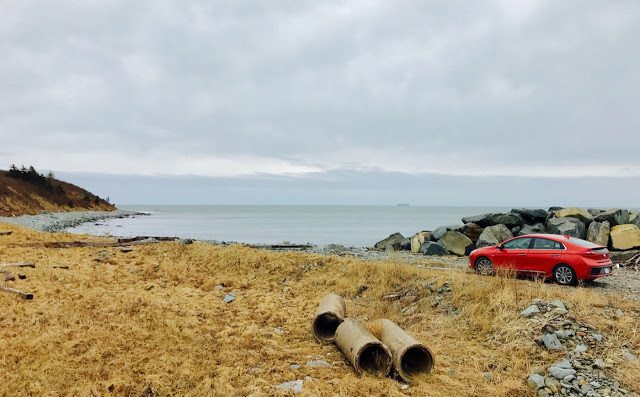 If you wanted to drive green, greener than Kermit, greener than Ireland, but you didn’t want to suffer range anxiety or even plug in, there was nothing greener than the Toyota Prius.

Was being the operative word.The 2017 Hyundai Ioniq Hybrid is now the most fuel efficient gas-powered car on sale in North America now.

The Prius’s reign has ended.

But the Prius’s reign in the marketplace may not be interrupted by a Korean upstart. Remember the Honda Insight? Honda tried and failed. The Insight is dead.

Prius is as synonymous with hybrid as band-aids are with, well, band-aids; as googling is with Google.

Does the Hyundai Ioniq have what it takes to be a successful interloper? Or will this all-new Hyundai be consigned to the Honda Insight’s fate, which was killed off by the Prius after a brief five-year run?

WHAT IS IT?
Based on a new platform shared with the Kia Niro, the 2017 Hyundai Ioniq Hybrid is one of three Ioniqs. There’ll also be a plug-in hybrid and a pure electric version.

Designed to tackle the all-conquering Toyota Prius in the dedicated green car field, the Ioniq Hybrid is presently the most efficient gas-powered vehicle in North America. Sized like Hyundai’s compact Elantra, the Ioniq will be priced more like the midsize Hyundai Sonata. 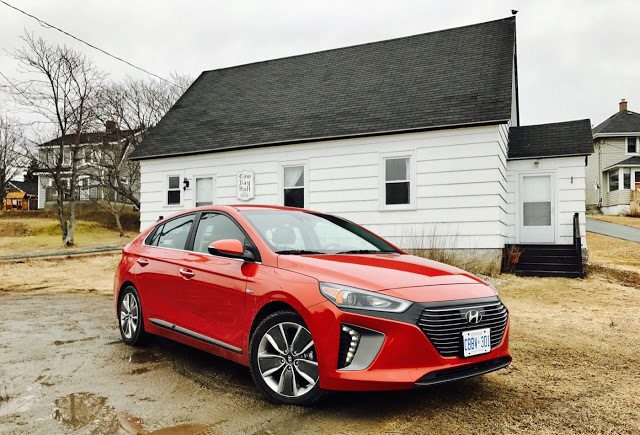 There’s also an SE trim, but regardless of the Ioniq Hybrid variant, the powertrain remains the same: a 1.6L Atkinson-cycle four-cylinder/1.56 kWh lithium-ion battery with 139 total horsepower hooked up to a six-speed dual-clutch automatic sending power to the front wheels.

HOW BIG IS IT?
Compared with its most obvious rival, the Toyota Prius, Hyundai’s Ioniq is slightly shorter bumper-to-bumper but also slightly wider and lower.

Besides getting more of the detailed styling elements right, the width and height help the Ioniq appear much less silly than the current Prius.

Passenger volume is virtually identical, although there’s more headroom in the Elantra and three passengers will invariably find the Elantra more comfortable. Cargo space is less comparable, as the Ioniq is a hatchback. Compared with the upcoming Elantra GT, likewise a hatchback, the Ioniq should have 6% more cargo volume.

DOES IT WORK?
In three major ways, the 2017 Hyundai Ioniq works better than the 2017 Toyota Prius.

First, the shifter mechanism you deal with multiple times each day is, in the Ioniq, normal. There’s a lot you’ll put up with in a car for which you spent $20,000-$40,000, but the Prius’s hateful shifter and separate Park button is unnecessarily annoying – there is no benefit. The Ioniq’s normal shifter is merely symbolic of a whole Ioniq that never comes across as weird. The interior design is normal, the infotainment unit is intuitive, even the sounds the car makes are largely conventional.

Second, the Ioniq happily accelerates. It’s no sports car. In fact, it’s no mainstream compact. But if you want greater urge, the Sport mode will leave the engine on (seemingly defeating the purpose of the car, but whatever) and get you up the side of mountain without difficulty. Indeed, the Ioniq never really feels wanting for power and doesn’t deter acceleration by routing power through a frustrating continuously variable transmission. In other words, you won’t drive around with your foot on the floor to keep up with traffic.

Third, the Ioniq sources a measure of joy from cornering that the Prius never will. Again, the Ioniq isn’t a keen handler, but the steering responds quickly enough, the nose tucks in, the body rolls but not too much, and the rear end copes with rough mid-corner pavement. The Prius copes, too, but the Toyota’s always suggesting that you don’t really want to drive down a twisty road this quickly, do you?

Those aren’t the only Ioniq high points — the cabin is of a high quality, NVH is minimal, the feature count is typically Hyundai high, and the cargo area is shaped for hauling – but they serve to describe ways in which the Ioniq highlights the Prius’s weak points at a particularly weak moment for the Prius.

There are potential pitfalls. The dual-clutch transmission is, thankfully, not the Prius’s CVT. But it’s not an especially quick shifter, and quick shifting is the claim to fame of DCTs. Moreover, Hyundai’s DCT can become confused, clunky, and laggardly at low speeds and low revs, particularly when the powertrain is shuffling its responsibilities.

Rear visibility, with a pillar bisecting the rear window precisely where a snowplow ought to appear in your rearview mirror, is awful.

With my near-six-foot frame in the driver’s seat, a front-facing child has no foot space and a rear-facing child seat required the front passenger to be moved far forward. Hyundai demands you pay midsize money for the Ioniq, but you won’t get midsize space.

And while offering better backroad behaviour than the Prius, ride quality at the rear end can be jarring. The Ioniq we’re testing is shod with low-profile winter tires, not the 195/55R15 efficiency-oriented tires of our test Prius but rather 225/45R17 Michelin X-ice winters. Equip both cars with the Hyundai’s wider, lower-profile rubber and the Prius may shine more brightly in corners. Equip both cars with the Prius’s tires and perhaps the Hyundai’s periodically harsh impacts would be eliminated.

The Ioniq’s stiffer ride would be more quickly tolerated if the car manifested real responsiveness. There’s periodic pillowiness, however, where the Ioniq doesn’t want to buckle down quite as hastily as its stiff ride suggests it will. More dynamic than a Prius, sure, but not a sports sedan.

The winter tires, meanwhile, may have contributed to somewhat disappointing real-world fuel economy results. While the Prius we tested last May drank only 4.1 L/100km, this Hyundai required more than 20% more fuel. The season isn’t favourable. Neither are the winter tires and the fact that the Ioniq’s odometer, with only around 1000 kilometres at arrival (and 1500 at departure) shows a very fresh car.

But the Ioniq’s supposed to beat the Prius. And in one major way, it didn’t. 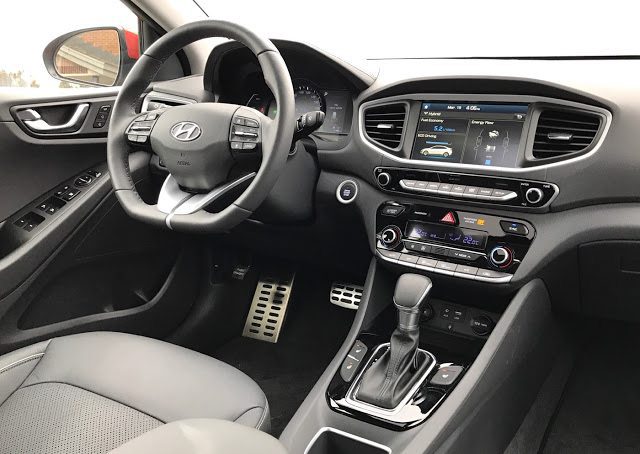 IS ANYONE BUYING IT?
Not yet. The Ioniq has registered some Canadian sales figures, but only as Hyundai registers the first copies, such as our test car. GCBC will be tracking Ioniq sales figures as Hyundai reports them.

SHOULD I BUY SOMETHING ELSE INSTEAD?
Outside of more affordable conventionally-powered compact cars with surprisingly low fuel consumption, prime Ioniq competition sits inside Toyota and Kia showrooms.

The Toyota is obvious: the Prius has been around for two decades and in fourth-gen form, it’s stone cold reliable; an entirely known entity. But the Prius is quirky in some unfortunate ways. The shifter is annoying, it doesn’t always feel sufficiently powerful, and there are many weird noises.

The Kia Niro, on the other hand, is a fraternal twin of this Hyundai Ioniq. Shaped to be viewed as a utility vehicle – it’s actually quite low and doesn’t even offer all-wheel drive — the Niro is nevertheless an enticing package. It doesn’t look like you’re trying to send an environmental message to your Silverado-driving neighbour.

HOW MUCH SHOULD I PAY?
We don’t know. As of this moment, Hyundai Canada hasn’t announced official pricing, simply stating that the Ioniq Hybrid will be priced fro the mid-$20s to the low $30s.

If you want an Ioniq, presumably fuel savings play a particular role in propelling your desire forward. Presumably then, overall financial savings would be of use. The basic 2017 Hyundai Ioniq Hybrid Blue is equipped with heated seats and alloy wheels; it’s not poverty-spec. And with the basic model, you won’t just save money at the fuel pump. You’ll save $5000-$8000 at the Hyundai dealer, too. 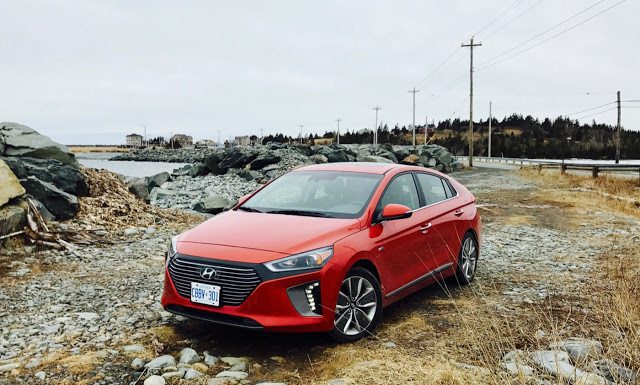 WHAT’S THE VERDICT?
On the whole, Canadians are pragmatic car buyers, unlikely to spend $10 just to save $5. Historically, this has made vehicles such as the Toyota Prius a hard sell. Think of it this way: while the U.S. new vehicle market is nine times larger than Canada’s, Prius sales in America in 2016 were 35 times stronger than in Canada, and that was in a particularly poor year for the Prius down south; a particularly good year for the Prius in Canada.

For these pragmatic car buyers, the Hyunai Ioniq’s greatest competition in the Canadian market won’t be the Toyota Prius. There are exceptionally few Prius buyers to try to woo, anyway. No, for the typical Canadian car buyer, the 2017 Hyundai Ioniq must be a more reasonable purchase than a 2017 Hyundai Elantra.

Without firm pricing for the Ioniq, it’s difficult to do the pure math. But the 2017 Hyundai Elantra Limited we tested last year consumed only 6.5 litres of fuel per 100 kilometres, just 1.4 more litres every 100 kilometres than this Ioniq, or roughly $140 more per 10,000 kilometres. The Elantra rides and handles better, accelerates more swiftly, and arguably looks better, as well. Elantra pricing starts below $18,000 and even the top trim Elantra Limited Ultimate is currently priced below $29,000, roughly $5000 less than this Ioniq.

In numerous ways, the 2017 Hyundai Ioniq is a better Prius. But it’s not a better Hyundai Elantra.

Timothy Cain is the founder of GoodCarBadCar.net, which obsesses over the free and frequent publication of U.S. and Canadian auto sales figures. Follow on Twitter @goodcarbadcar and on Facebook. The Ioniq was supplied by Hyundai Canada’s press office.