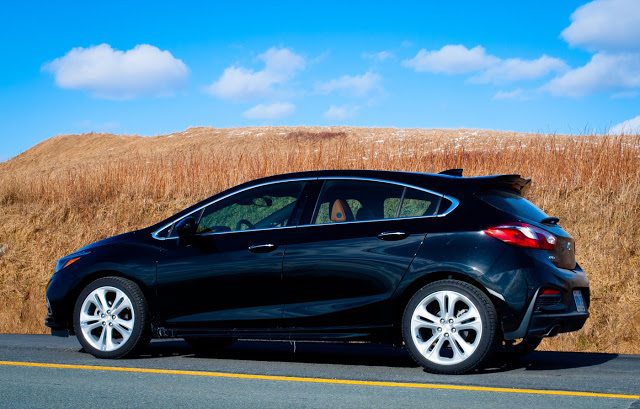 In recent weeks, the gap has spread. In January 2017, for example, Canadians acquired 1.5 utility vehicles for every car.

And yet new car introductions continue at a healthy pace. And in the most hotly contested passenger car sector, compacts, the arrivals are frequent.

There are new sports cars from Fiat and Acura: 124 Spider and NSX.

There are new hybrid and electric cars from Hyundai, Chevrolet, and Kia: Ioniq, Bolt, Niro.

And there are new hatchback variants of established nameplates such as the Chevrolet Cruze. With the car sector’s share of the market rapidly shrinking, with only three in ten new vehicle sales in January coming from the car sector, automakers aren’t giving up.

2016 was not a year to remember for the Chevrolet Cruze. Will the addition of a practical bodystyle bring new life to GM’s compact car?

WHAT IS IT?
General Motors has been building small cars for decades. Name changes are par for the course. The Cruze’s Cobalt predecessor, for instance, lasted only one generation before the first Cruze arrived for the 2011 model year. Prior to the Cobalt and its Pontiac G5 twin, there were three generations of the Chevrolet Cavalier and accompanying badge-engineered twins. 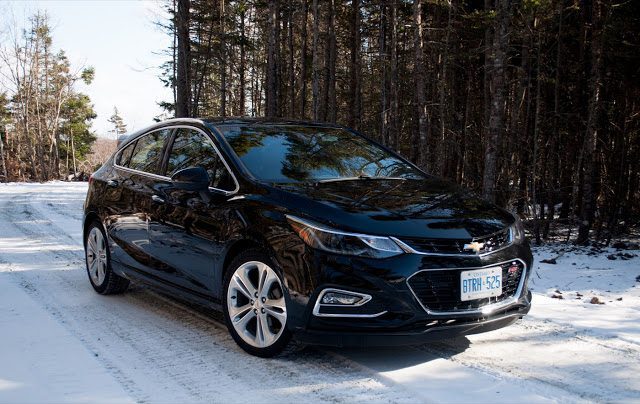 The dawn of the Cruze era, however, brought about far greater small car focus for General Motors, a company that for too long rested on the laurels of North American market share dominance and thrust upon an unsuspecting public disappointing compact cars. The Cruze needed to be successful around the world, in discerning small car markets where GM couldn’t just toss out a half-baked appliance and call it a day.

Launched first as a sedan, the second-generation Cruze is now available in hatchback form for the 2017 model year. Forget the lower trim levels seen on the four-door Cruze: this Cruze five-door isn’t available in L or LS trim. With a base price of $22,395 with a manual transmission, the 2017 Chevrolet Cruze LT can be optioned up with an automatic shifter for $1450. Equipped as standard with the automatic, the Premier, known in the past as Chevrolet’s LTZ trim, adds $2600 to the price of the LT. To that $26,445 price, GM Canada’s press fleet added a $995 RS Package (body kit, fog lights, 18-inch wheels), a $995 Convenience Package (auto climate control, heated rear seats, auto-dimming rearview mirror, and other smaller items), and the $870 Advanced Safety Package (FCA, LDW, LKA, IAHBC, SBZAWLCA, RPA, RCTA).

HOW BIG IS IT?
A 106.3-inch wheelbase is par for the course in the compact arena. Wheelbase length in the Cruze is identical to the Hyundai Elantra, Toyota Corolla, Honda Civic, and Mazda 3.

Compared with the Mazda and Honda, the two most recent Cruze-competing hatchbacks we’ve tested, the Chevrolet’s overall length is three-tenths of an inch and 2.6 inches shorter, respectively. The Cruze is marginally narrower than both but marginally taller, as well. Official specs say the Cruze offers less overall passenger space than the Mazda and Honda. In reality, it feels more spacious than the Mazda, not quite as capacious as the Civic. Behind the rear seats, there are 699 litres of cargo space in the Cruze, 127 more than in the Mazda but 29 fewer than in the Civic.

As for the Cruze sedan, overall length stretches 8.4 with the trunk added, but cargo capacity is 78% greater in the hatchback. The sedan doesn’t drive like a car that’s 8 inches longer; the hatchback won’t swallow 78% more suitcases. 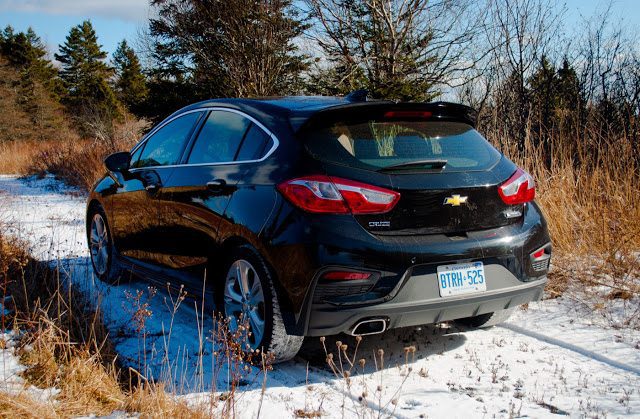 DOES IT WORK?
For all the perks associated with the first Cruze’s big car manners – exemplary highway ride, quiet comfort, isolated harshness — there was always the sense that the reason the Cruze felt like an Impala was because it weighed as much as an Impala.

It wasn’t quite that bad, but the exercise regimen the Cruze endured before debuting as a second-gen model was well worth it. Ride quality on 18-inch wheels isn’t peerless, but the Cruze is fortunately now a nimble car with light and accurate steering, impressive response to mid-corner adjustments, and the kind of brake feel we’ve increasingly come to expect from General Motors.

Throttle response with the seemingly sufficiently powerful 153-bhp 1.4L turbo four-cylinder is lackluster, however. The six-speed automatic shifts smoothly enough, but downshifts must be begged and pleaded for. Always, one suspects the Cruze is attempting to convince you that going faster – even though it can, if you floor the throttle – would be a bad idea.

Also slow to respond is GM’s MyLink infotainment system. Voice controls are useless, as well. At least it’s straightforward and, in this case, reliable.

Interior material quality befits the Cruze’s compact category. While you may not be wowed by the Kalahari leather of our tester, others will be, and we should all be thankful for choice. Seat comfort in front and back is decent, rear legroom is much improved over the first-generation, and the low centre hump makes three abreast seating a possibility.

Only on the rarest of occasions, such as hard acceleration, does excessive noise enter the cabin. The 1.4T can be buzzy in its protestations.

The heated steering wheel never feels truly heated, only warmed. At a $29K price point, it seems odd to have to spend even more to get a sunroof in a compact Chevrolet.

For some buyers, the Cruze’s faults will appear minor and easy to overlook. It’s not a Honda Civic or Hyundai Elantra or Toyota Corolla. It’s not what everybody else is driving. And with the RS bodykit and wheels, it looks good, too.

IS ANYONE BUYING IT?
Unfortunately, General Motors doesn’t break down Cruze sales by bodystyle.

In Canada, Chevrolet’s compact volume in 2016 was at its lowest point since the dreadful days of 2009. Sales have declined in eight of the last ten months.

South of the border, the story is similar. With fewer than 190,000 Cruze sales in 2016, it was by far the lowest-volume year for Chevrolet compacts since the Cobalt produced only 121,871 sales in the doldrums of 2009. Compared with 2014, Cruze sales in 2016 were down by more than 84,000 units. The good news: U.S. Cruze volume has now improved in six consecutive months, boosted presumably by sales of the Mexican-built hatchback.

‘;
document.getElementById(“vinads_div”).innerHTML = lfAd;
}
});
SHOULD I BUY SOMETHING ELSE INSTEAD?
The number of rivals is quickly expanding. Not only was there a handsome new version of the Hyundai Elantra GT unveiled earlier this month, but Honda now offers a hatchback variant of Canada’s best-selling car, the Civic. The Scion iM now operates as the Toyota Corolla iM.

There are hatchback versions of the Mazda 3, Kia Forte, Ford Focus, Subaru Impreza, and Mitsubishi Lancer, plus the Volkswagen Golf.

The Cruze sits in amongst the group as a decent all-rounder: not as fun as the Mazda 3, not as spacious as the Honda Civic, not as mature as the Volkswagen Golf. But the Cruze is a decent drive on a back road, it’s quite spacious, and it’s really rather refined.

HOW MUCH SHOULD I PAY?
The 2017 Chevrolet Cruze Hatchback is perhaps at its most desirable in LT trim with the manual transmission and the $1900 True North Edition package: rear park assist, side blind zone alert with lane change alert, rear cross traffic alert, an eight-inch MyLink touchscreen, upgraded Bose audio, sunroof, pushbutton start, proximity access, and a power driver’s seat.

At $24,990, that car needs more stylish wheels to look the business, but since it costs $4215 than the Premier tester GM Canada sent our way, you’ll have some spare coins in exchange for losing this car’s bodykit and leather seating.

WHAT’S THE VERDICT?
For a moment, set aside verdicts past rendered in your mind on subjects such as the Chevrolet Cavalier and Citation. Forget, if you can, resale value, ignition switch scandals, and the dealer experience. Just take the 2017 Chevrolet Cruze Hatchback Premier, if only for a moment, at face value.

Building on what made the first Cruze a real success, the second-generation Cruze adds to the nameplate’s merit list a lighter weight chassis that enables nimble, responsive, and lively handling. The Cruze is still quiet, still free from vibration, and still rides well, but it’s a decidedly more enjoyable car with which to engage when you take the long way home.

If only it was enjoyable to engage the throttle pedal.

The 2017 Chevrolet Cruze is a good car, a fine and largely inoffensive car. It has the potential to be more than that.

Timothy Cain is the founder of GoodCarBadCar.net, which obsesses over the free and frequent publication of U.S. and Canadian auto sales figures. Follow on Twitter @goodcarbadcar and on Facebook. The Cruze was supplied by GM Canada’s press office.