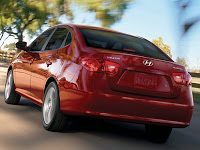 HYUNDAI ELANTRA SELLS IN THE MILLIONS

Hyundai sold 126,000 vehicles in the United States during its first year in American business. That was 1986. The quality of early Excels and Ponys was abysmal. Hyundai overcame its poor reliability reputation and now ranks near the top in quality surveys.

Presently, Hyundai sells vehicles in over 190 countries and is widely known to be – in terms of units sold – the fifth largest automobile manufacturer in the world. Evidence?
Sometime near the end of this month, the Hyundai Elantra nameplate will surpass 3,000,000 sales outside of Hyundai’s domestic market. That’ll make the Elantra Hyundai’s second vehicle to accomplish this feat – the less expensive Accent being the first. Pair this statistic with the effect the Elantra has had on the Korean market, and the tally rises to 5,000,000 Elantras by the end of 2008.