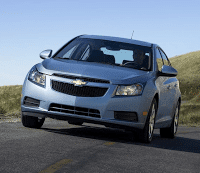 Domestics vs. Imports – U.S. Auto Market Share Through Two-Thirds Of 2011

We’re a week away from finding out just how many new vehicles were sold in September and in the first three quarters of 2011. But we’ve had information on the first two-thirds of 2011 for weeks now.

With that information in hand, let’s take a look at the big picture: Domestics vs. Imports. In addition, there are three more charts below which present a continental market share break down, brand-by-brand, from the United States, Europe, and Asia.

And now would be a good time to point out that many vehicles American automakers have recently brought to market would likely have steered the domestics toward greater market share even if there hadn’t been dreadful circumstances affecting Japan’s auto manufacturers. Compact car sales at General Motors, for example, are up 88.4% thanks to the wildly successful Chevrolet Cruze. That has little to do with Toyota’s troubles.

Scroll past the jump for a more in-depth look at brand-by-brand U.S. auto industry market share.

Two domestic brands are responsible for nearly two-thirds of domestic auto brand sales in their home market. Ford has sold 1,366,780 new vehicles this year. That’s up 18% from the first two-thirds of 2010. Chevrolet sales stood at 1,206,322 through eight months, up 15% from 2010’s pace.
Broken down by corporations, General Motors’ market share in the domestic field is at 42.5% through August. Ford Motor Company is at 35.7%. The Chrysler Group, without Fiat and Maserati and the hugely vital Ferrari division, is currently a hair under 22%. 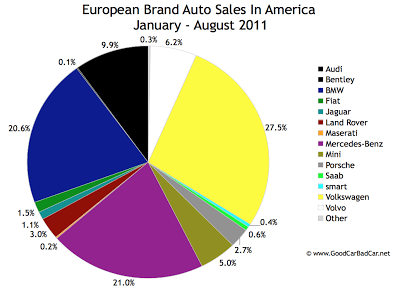 The vast majority of European brands aim for a higher price point. This inevitably leads to lower volume, also known as greater exclusivity. Volkswagen, particularly when Audi’s included, is far and away the most dominant European player competing in America. But BMW and Mini grab more than a quarter of all European auto sales in the U.S. Mercedes-Benz is above one-in-five.
For specific volume numbers, check out The Good Car Guy’s U.S. Auto Sales By Brand post for August 2011. 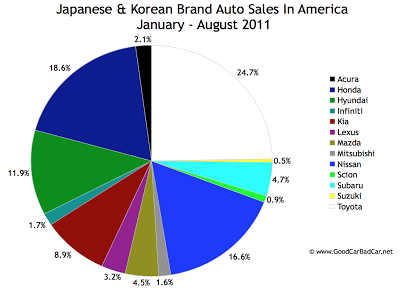