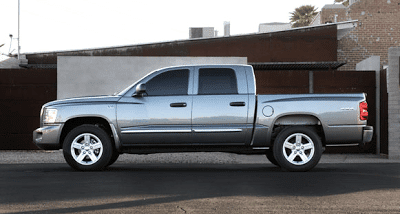 The Dakota Died. Dodge Killed It.

Sales of the Dodge Dakota – or Ram Dakota if you prefer to call it that – fell 90% between 2002 and 2010. Not much wonder then that production of the Warren, Michigan-built Dodge Dakota ends today: Tuesday, August 23, 2011.

Only, that’s a simpleton’s view of the mess in which the Dakota’s found itself over the last few years. Study the blue line in the U.S. sales chart below and you’ll see that the Dakota sales peak in the last decade was indeed a decade ago. That alone sounds like cause for dismissal. But a glance at the higher red line, a line which plots yearly sales for the Dodge Ram – or Ram 1500, whatever you wanna call it – have plunged as well, falling 49.7% from 2002’s 396,934 to 2010’s 199,652.

In fact, the Ram’s 10-year peak was in 2003. Sales since then have fallen 55.6%. Yet you won’t hear Fiat/Chrysler executives discussing the cancellation of Ram production. This of course goes back to the nature of the market. Overall new vehicle sales are down 31.2% since 2002. And though the Ram has fared rather worse than America’s best-selling vehicle, Ford F-Series sales have dropped, too, down 35.1% since 2002.

Say what you will about the Dodge Dakota’s sales drop being significantly worse than the overall market’s decline, there must be other reasons for the truck’s decline. The Dakota isn’t a full-size truck, and when Dodge sold more than 130,712 Dakotas in 2002 we were all inclined to give Dodge credit for making sure the Dakota wasn’t a small truck like the itty-bitty Ford Ranger. Eventually this became a Dakota liability: it wasn’t fuel-efficient like you wanted a small truck to be; it wasn’t as capable as a full-size truck.

In the end, the Dakota’s problem wasn’t the drastic sales decline. Dodge forced that result upon the Dakota by failing to invest in the Dakota’s future and pricing it (currently) at $23,210. That’s $2400 more than the current base price of a Ram 1500.

Saying there’s no market for small trucks is akin to Apple enlarging the iPod until it was awfully close in size to the iPad while ensuring the iPad was more capable and pricing both items similarly. Alas, there’d be no market for the big iPad-priced iPod which features less memory, fewer features, and no real benefit. Yes, the non-full-size market has declined, as TTAC pointed out in a chart on the weekend, but would you have expected anything less when automakers pour support into their full-size ranges and ignore the smaller pickups? Moreover, the whole new vehicle market declined, most obviously on the pickup side of the ledger, but truck production isn’t grinding to a halt.

In the United States, the Dodge Dakota is a V6-engined $23K truck (excluding what must be awesome current discounts) rated at 15/20 miles per gallon. With a 5.7L Hemi V8 the Ram 1500 is equally efficient on the highway and only one mpg worse in the city. And you were considering the purchase of a Dakota in the light of a sublimely powerful, spacious, handsome truck like the Ram? Or the 17/23 mpg Ford F-150 V6?

So that’s settled. Consumers didn’t reject the Dodge Dakota because consumers reject small and midsize trucks as a segment. Consumers rejected small and midsize trucks like the Dakota because big trucks are rockin’ and trucks like the Dakota really aren’t all that good, comparatively. As a result, the Dodge Dakota is dead. Defunct. Deceased. Departed. Done for. The chart below doesn’t display the reason for the Dakota’s death, it simply shows the Dakota’s record during the period in which the truck was dying.