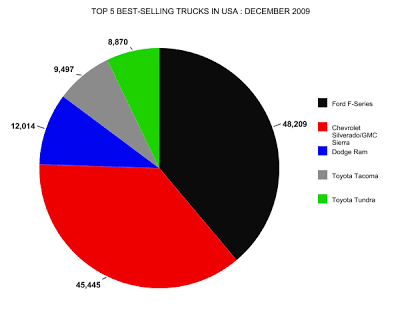 Home
All Vehicle Rankings
Trucks & Vans
Truck Sales
December was a fairly spectacular month for the Ford F-Series in the United States. If every month of ’09 had been so strong F-Series sales would have remained much closer to traditional levels, rather than being so near to Toyota’s Camry Sales Stats.
As proof of the Ford and General Motors dominance in the pickup truck category, take a look at Dodge Ram sales from December in the Graph below. Every time Dodge sold a Ram last month, Ford sold four F-Series pickups. GM was nearly at that point, too (3.78 is close enough). We’ve long since realized that pickup truck sales were going to fall off a cliff. What most people failed to acknowledge was that pickup truck sales were going to fall onto a cliff not very far below the original cliff. Check out November’s best-selling trucks in America right here. Or take a look at the 2009 Year-End Top 5 Best-Selling Trucks in America.