Value is a subjective characteristic. One car may cost a little more money than a competitor; but it may also supply you with substantially more power and luxury. On the other hand, one vehicle may cost substantially more than its sister car while providing the buyer with just a few more horses and a smattering of added features.

Value does not equate with cheapness. In fact, the very makeup of the word “value” protects it from cheapness. $5.00 mp3 players may sound good value, but not when the music stops within a week. That’s ‘cheap’, not value.

Value, oh Good Car Nation, is the device that holds 30x the songs for 15x the price. Here, below, is a vehicle which, in light of similar offerings from the same dealership, can’t be called a good value. On this day, November 8th of 2007, the Mercedes-Benz SL65 AMG.

Friends, it’s a spectacular automobile. Mercedes-Benz brought hardtop convertibles (SLK) back to the relatively wealthy… and they also delivered the same concept to the stinking, filthy rich, while the merely crazy rich (CLK) must toil with a soft top. Sounds good so far. Pay $187,975 USD and your coupe becomes a convertible. That coupe/convertible is shoved along by 604 horses. Torque is limited to just 738 lb-ft. 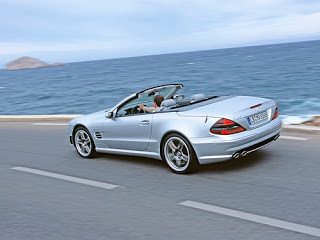 Needest thou context? The new and very powerful Honda Accord V6 utilizes one-third the torque and substantially less than half the horsepower. Yet, the SL65 AMG still sounds like a good deal. Yeah, it’s a lot of money – but it’s one of the most powerful vehicles on the road. And though there are more sporting vehicles available for a similar price – with names like Ferrari and Lamborghini – and though there are more handsome vehicles available for the price – with names like Bentley and Aston Martin – the vehicles which show the SL65 to be overpriced are its own stablemates.

For around half the price, Mercedes-Benz USA will sell you an SL550 with… yes, more than half the power. For a savings of $57,900, M-B USA sells the SL55 AMG, losing ‘just’ 94 horsepower but, in reality, gaining a more enjoyable driving experience.

Is the Mercedes-Benz SL65 AMG a bad car? Not at all. It likely reigns as one of The Good Car Guy’s favourites. It must be admitted, nonetheless, that Mercedes itself sells

better all-around vehicles that would save you enough money to add a 268 horsepower, all-wheel drive E350 wagon for all your family hauling while still catapulting yourself out of reality in a 510 horsepower SL55 AMG.

All for the price of today’s first Bad Value: the Mercedes-Benz SL65 AMG.