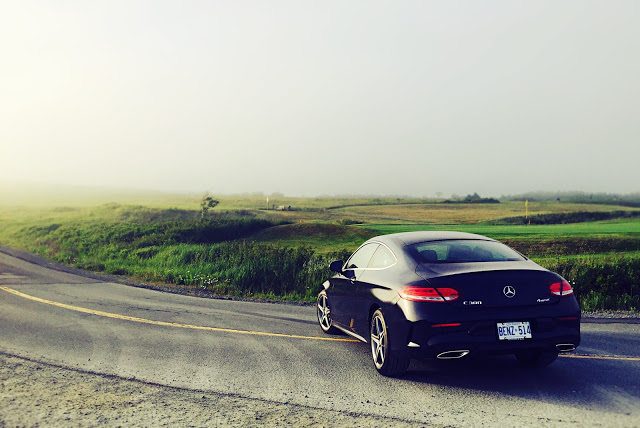 A fixed roof, seats for two or perhaps four in a squeeze, and two doors.

The definition of the automotive coupe, or coupé if your French sensibilities prefer, has been commandeered over the last dozen years by the very company that builds the car pictured here.

Spun off from the E-Class sedan, the CLS sedan was and is labelled as a coupe by Mercedes-Benz because of its coupe-like styling. But the CLS has four passenger doors.

The concept has flown even further from the roost with so-called SUV coupes: the BMW X6 and X4 and Mercedes-Benz’s GLE and GLC Coupes, all of which feature four full passenger doors and a rear liftgate.

Real coupes nevertheless forge on. Real coupes continue to project an aura of joie de vivre, of carpe diem, of bon viveur the likes of which no sedan, not even a sedan with excessive fastbackness, can ever dream of replicating. 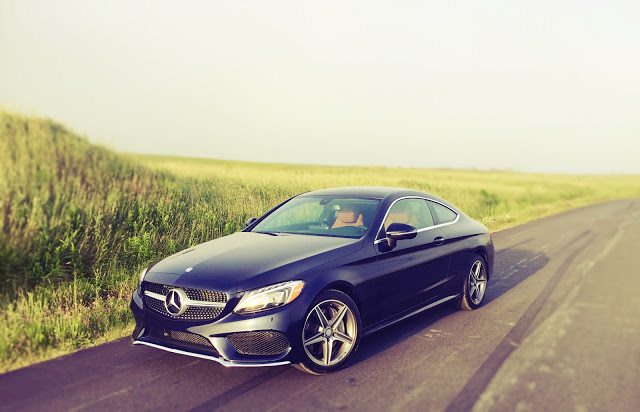 To begin its run, the 2017 C-Class Coupe will be sold as the Mercedes-Benz C300 and Mercedes-AMG C43, both with 4Matic all-wheel drive, and as the full-bore rear-wheel drive AMG C63 and AMG C63 S. The AMG-badged cars are fitted with, respectively, a twin-turbo 362-horsepower V6 (mated to a 9-speed automatic) and a twin-turbo 4.0L 503-horsepower V8 joined to a 7-speed AMG Speedshift 7-speed automatic.

Our test car, however, held under its hood a modest 2.0L turbocharged inline four-cylinder producing 241 horsepower and a substantial 273 lb-ft of torque just off idle at 1300 rpm. The 7-speed automatic is standard equipment.

The $2000 sport package adds more leather to the dashboard, some AMG styling elements inside and out, and 18-inch wheels.

HOW BIG IS IT?
In Canada, there will soon be four C-Class bodystyles. The traditional sedan has already been joined by this coupe, which will also spawn a convertible variant. There’ll also soon be a wagon that Mercedes-Benz won’t be selling in the United States. Compared with its sedan donor car, the coupe version of this fourth-generation W205 Mercedes-Benz C-Class rides on the same wheelbase, is identically long and wide, but is 1.5 inches shorter at the roof

Compared with the segment standard bearer from BMW, the 428i xDrive, the C300 4Matic is a hair under two inches longer, half an inch slimmer across the hips, half an inch taller, and rides on a wheelbase that stretches 1.2 inches farther. The 4-Series’ trunk, however, is a substantial 50% larger, and official specs say the BMW’s interior is 14% bigger, as well.

DOES IT WORK?
Not in the way that many other recently introduced Mercedes-Benzes also fail to work. The 2017 Mercedes-Benz C300 4Matic Coupe has the same tacked-on screen that looks and feels cheaper than a cut-price iPad rival. The shifter is a silly little column-mounted stalk that doesn’t make much sense from a usability standpoint and would be mocked for Korean cheapness if installed in a Hyundai Accent. One key quality concern crept up, as well, because the C300’s sunroof sounded like it was crunching gravel when opening or closing. As a result, we opened – and closed – the sunroof just the once.

Mercedes-Benz’s well-done door-mounted seat controls are joined by the heated seat button and a blanked-out switch for, at this price point, necessary ventilated seats. And Mercedes-Benz still demands big money for options that should be standard equipment. Even at $57,715, you’ll need to pull a key fob from your pocket to unlock the C300’s doors; you’ll need to insert and twist that key to start the car. You don’t need to do that in a $25,855 Kia Forte Koup, which knows you’ve approached and needs only a single finger prod to ignite. Mercedes-Benz Canada demands $6400 in options on top of the C300’s $50,175 base price in order to gain hands-free access.

For Mercedes-Benz in 2016, this list of complaints is nothing new.

Nor is praise for the C300’s torque-rich 2.0L turbocharged four-cylinder new. Appreciation for the C300’s otherwise elegant and classy interior? Par for the course. Indeed, the interior is further strengthened by our test car’s stunning saddle brown leather draped over superb seats. The ride and handling balance? Spot on, and Mercedes-Benz scores a bigger victory here because the Agility Select’s Dynamic button dramatically alters the character of the car.

Hasty throttle response and quick shifts with weighty controls provide a far more sporting experience in the Sport+ setting than you’d expect having only encountered the C300 Coupe in Normal mode, while the dull responses in Eco mode are perfect if Oma Müller is squeezed into the back seat. 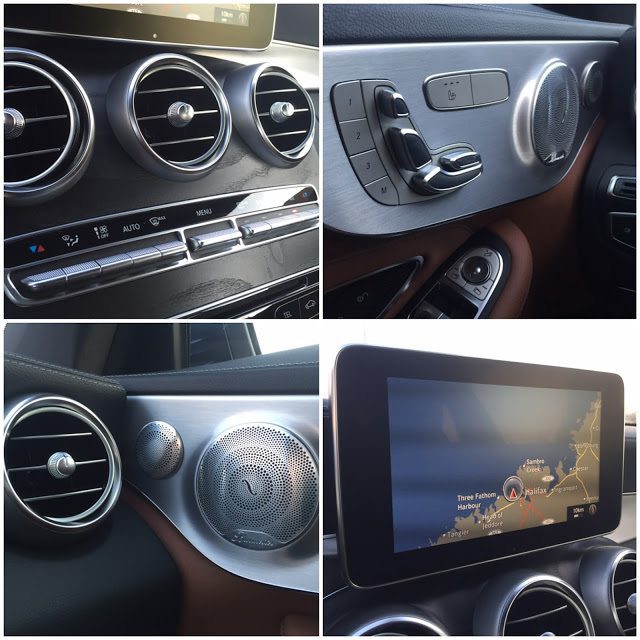 The power figures produced by the 2.0L turbo aren’t jaw-dropping on paper, but the C300’s plentiful torque is available so far down the rev range that you’re never left out of the meat of the powerband. As an overtaking machine on a rural two-lane, the 2017 C300 Coupe is more capable than 241 horsepower lead you to believe. It would be nice if the 7-speed automatic was a more cooperative partner when you most want to forget a transmission is necessary: around town or driving home from the grocery store. Fortunately, it’s far more willing when you demand greater performance.

Two doors definitely makes a coupe, but the removal of a sedan’s rear apertures does not make automatically make a sports car. If you want crazy performance, look elsewhere in the Mercedes-Benz lineup; perhaps elsewhere in the C-Class lineup. Instead, the C300 4Matic Coupe works well as a comfortable and refined cruiser with sporting potential.

IS ANYONE BUYING IT?
Mercedes-Benz does not break down U.S. or Canadian sales figures by bodystyle. The overall C-Class lineup is currently Canada’s top-selling premium vehicle line, though volume is down 17% this year.

In the United States, the C-Class family ranks first among premium cars; second (behind the Lexus RX) among premium vehicle sales in 2016’s first-half.

Using U.S. inventory as a rough guide, approximately 17% of the C-Classes in stock at the moment are coupes. If that ratio holds true for sales volume, Mercedes-Benz USA would have sold 6300 C-Class Coupes in the first-half of 2016. Lexus sold 5292 RCs during the same period; Audi sold 4334 A5s as they ready the current car’s replacement. BMW, with a much more extensive 4-Series lineup (including a definition-ignoring four-door Gran Coupe) produced 19,276 first-half sales.

SHOULD I BUY SOMETHING ELSE INSTEAD?
There are a handful of interesting options lined up directly against the C-Class Coupe. BMW’s 4-Series is the most obvious. The Audi A5 has proven to be a popular choice since launching in 2007. There are Japanese competitors from Lexus (RC) and Infiniti (Q60), the latter of which will be all-new shortly, along with a new Audi A5.

We would also suggest a downsized alternative from BMW if performance is a key component of your choice. With all-wheel drive, the BMW M235i is less expensive than this C300 4Matic. 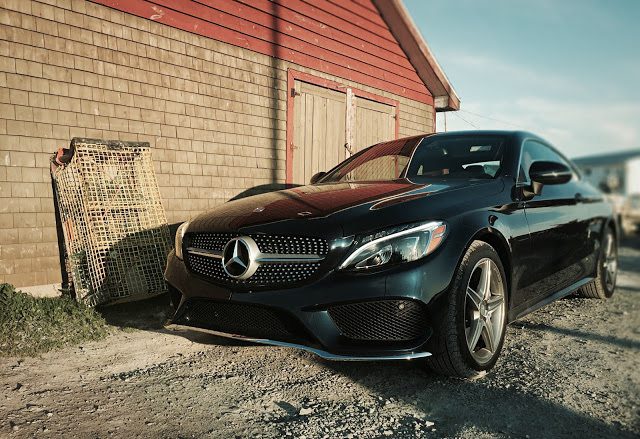 HOW MUCH SHOULD I PAY?
With $7540 in options, our Mercedes-Benz-supplied test car was specified awkwardly. It’s a $57,715 Mercedes-Benz coupe with no keyless access, no pushbutton start, and no cooled seats – only the button which should operate the cooled seats. Skip the special paint, open-pore dark ash wood trim, and Burmester audio and it’s more tenable at $55,575, but we think the C300 4Matic is likely best at either its base price of $50,175 or slathered with even more options to become a true luxury coupe.

‘;
document.getElementById(“vinads_div”).innerHTML = lfAd;
}
});
WHAT’S THE VERDICT?
In a maket that’s gone crazy for vehicles such as Mercedes-Benz’s own GLE-Class SUV, the top-selling premium brand utility vehicle in Canada, relatively impractical coupes with snug rear seats and tight trunks are far out of the mainstream.

Yet with premium price tags and the ability to share platforms with sedans and crossovers, numerous luxury automakers continue to fight for a relative handful of sales in this coupe category. Is the Mercedes-Benz C300 4Matic Coupe better than the BMW 428i, Audi A5 2.0T, and Lexus RC300?

We’re not hedging. But the cars are markedly different. Mercedes-Benz nailed the C300 Coupe’s elegance quotient, crafting a $57,715 car that feels like it should cost $67,715. Upgrading a few key interior components, installing a transmission that’s happier at low revs, and improving the options list would serve to clarify the C-Class Coupe’s position in the luxury coupe hierarchy.

Timothy Cain is the founder of GoodCarBadCar.net, which obsesses over the free and frequent publication of U.S. and Canadian auto sales figures. Follow on Twitter @goodcarbadcar and on Facebook. The C300 was supplied by Mercedes-Benz Canada’s press office.