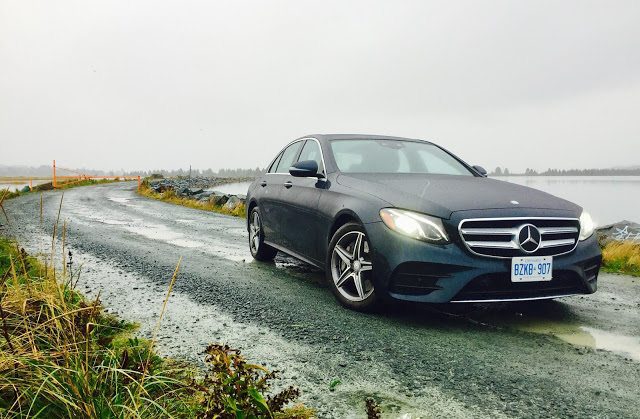 Only a decade ago, the Mercedes-Benz E-Class sat at the heart of Mercedes-Benz Canada’s lineup: not the highest-volume car but a hugely profitable sedan smack in the middle of the luxury car market. 14% of the new vehicles sold by Mercedes-Benz in 2012 came from the E-Class family.

The rise of SUVs and crossovers means the E-Class isn’t nearly as vital a force in Mercedes-Benz’s lineup now as it was just a few years ago. Only 8% of the Mercedes-Benzes sold in Canada this year have been E-Classes.

But the E-Class remains the symbol of midsize luxury. Perceived to be of much higher standing than a mere C-Class or CLA but not nearly so unnecessarily lavish as an S-Class, the E-Class enters its fifth-generation’s tenure with automatic, built-in consumer regard.

Thousands of Canadians will buy a new E-Class this year while limited market share will be afforded to the majority of its rivals, cars worthy of consideration that will get very little.

WHAT IS IT?
The Mercedes-Benz E-Class nameplate can be traced back approximately 23 years to the quintessentially modern Benz that continues to play a role as the vintage wagon of choice for upper-middle-class soccer moms in movies. Although there was a long line of predecessors, this is where the modern E-Class begins. The dual headlight trend then began for the 1996 model year and continued through the fourth-generation E-Class in more angular form. 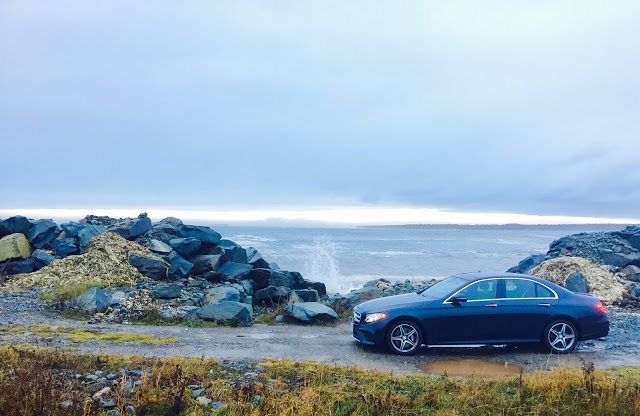 Now codenamed W213, the all-new fifth-generation Mercedes-Benz E-Class looks exactly like a shrunken Mercedes-Benz S-Class. Or is it a stretched and swollen C-Class?

Initially launched in Canada as a sedan exclusively in E300 4Matic guise, the 2017 Mercedes-Benz E-Class range will inevitably expand to more bodystyles — the outgoing E-Class was sold as a sedan, wagon, coupe, and convertible, plus the swoopier CLS sedan that Mercedes-Benz calls a coupe. There’ll soon be bigger engines with more cylinders and an array of AMG models.

Our 2017 E-Class tester is an E300 4Matic fitted with the 2.0L four-cylinder turbo producing 241 horsepower and 273 lb-ft of torque, hooked up to a nine-speed automatic.

HOW BIG IS IT?
For comparison’s sake, consider a prime competitor, then Mercedes-Benz’s own lineup, and finally a car you know well, Canada’s best-selling car.

The outgoing 2016 BMW 5-Series has historically been the E-Class’s most direct rival. The new E-Class is four-tenths of an inch longer, three-tenths of an inch narrower, and two-tenths of an inch taller with a wheelbase that’s slightly more than an inch shorter. The 5-Series’ trunk is 7% larger; its cabin is 4% larger.

Parked outside a Mercedes-Benz dealership, the new E-Class stretches 9.3 inches farther, bumper to bumper, than the Mercedes-Benz C-Class sedan. The E-Class’s wheelbase is a hair under four inches longer, and these two dimensions, along with the nearly two extra inches of width, explain the E-Class’s far superior rear seat. Compared with the least costly Mercedes-Benz S-Class, the new E-Class is more than a foot shorter, two inches narrower, and an inch lower with a wheelbase that’s nine inches shorter.

How to put it all into perspective for the typical Canadian car buyer? Nearly one out of every ten new cars sold in Canada are Honda Civics. The Civic sedan grew in tenth-gen form – so did the E-Class on its way to becoming a new fifth-gen car – but the E-Class is a comparatively vast car: nearly a foot of extra length, two extra inches of width, two extra inches of height, and more than nine additional inches of space between the wheels. Yet their cabins are almost identically capacious, the official specs say. 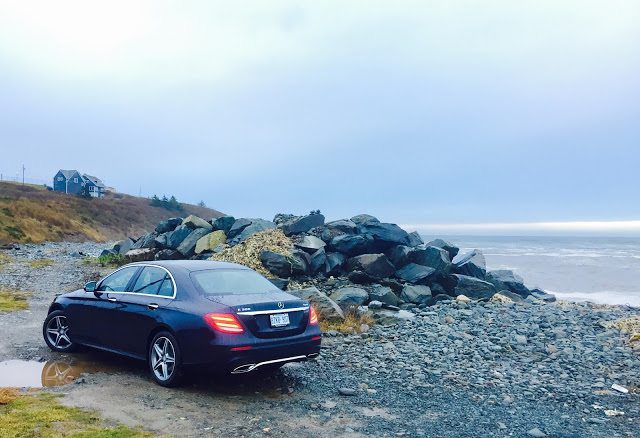 DOES IT WORK?
It’s natural to think that a 2.0L four-cylinder engine won’t be sufficient to power a 4000-pound, all-wheel-drive sedan. It’s natural to think, even if the 2.0L engine is turbocharged, that there’ll be a dearth of off-the-line response, the kind of response to which we’ve become accustomed on a continent where tiny-engined luxury cars have never been accepted. And it’s natural to think that even if the engine is a turbocharged, 241-horsepower inline-four with decent off-the-line gumption that there will still be a degree of vibration and harshness unacceptable at this lofty $72,595 price point.

Natural those thoughts may be, but they’re also incorrect. There’s a momentary sense of 4000 pounds needing to be moved, but the E300 4Matic accelerates from 0-100 kmh in around 6.5 seconds, more than enough off-the-line punch for a base midsize luxury sedan. The kind of torque necessary to overtake is abundant: all 273 lb-ft of twist peaks early and plateaus. And vibration? No, there’s far too much isolation between the E-Class’s cabin, its steering wheel and headliner and throttle pedal, to feel any hint of a small four-cylinder at work.

The 2.0T won’t wow you as it does in the CLA250, where as a horizontally mounted unit it generates 208 horsepower. But this is plenty of power for the very buyer who’ll appreciate the E300 4Matic’s calm and collected chassis.

‘;
document.getElementById(“vinads_div”).innerHTML = lfAd;
}
});
Mercedes-Benz did not pursue a sporting demeanor with this entry-level E-Class, thank goodness. Pushed hard to perform when called upon, the steering is appropriately weighty and the body remains composed. But comfort is the priority, serenity is the goal, tranquility is the objective. The 2017 Mercedes-Benz E300 4Matic ignores choppy pavement, hushes the outside world, and can genuinely steer itself down the road. The solitude is welcome.

As for the Drive Pilot, part of – or the result of – Mercedes-Benz’s Intelligent Drive Package, it’s a wonder that technology has moved this far forward this fast. Perfect autonomy? Hardly. The E300 struggled on more than one occasion as one lane became two precisely where intersecting traffic approached a stop sign. The result: as if losing its peripheral vision, the Benz seemingly panicked, jerking the wheel to the left and slamming the brakes.

There was absolutely nothing wrong; nothing calamitous in our path. Drive Pilot also once confused a driveway that veered off the road, uphill and to the right, with the actual road, which was veering uphill and to the left.

Generally, however, in a highway environment, the E300 4Matic can completely take over the proceedings with cruise control activated. Dramatically reducing driver fatigue, it’s a terrific arrow to have in your quiver. But all the elements that add up to the Intelligent Drive Package skate better individually than they do as a team.

And Mercedes-Benz can get technology right. The E300 4Matic’s cabin, equipped here with all the goods of the Premium Package, is both stunning to behold and straightforward to use. Screens span much of the width of the dashboard, with a phone menu on the far left, tachometer/speedometer in the middle, and an efficiency read-out on the far right of the “gauge cluster.” The 12.3-inch centre screen was divided up with navigation and a larger radio/media screen. But this is all customizable.

Spectacular graphic quality and quick COMAND responses make the experience a breeze. The cabin isn’t perfect: the column shifter is rinky-dink, the seatback is too firm, despite the car’s size the driver’s seat still needed to be moved forward for rear-facing child seat installation, and all of that information on the screens can be a bit much.

But this is a high-class establishment. Given the price point, it had better be.

IS ANYONE BUYING IT?
Through the first nine months of 2016, Canadian sales of the Mercedes-Benz E-Class and its CLS-Class offshoot rose 3% to 2,408 units. That suggests a calendar year pace of roughly 3300 sales, the fourth consecutive year of 3K+ sales after the E-Class jumped to 4083 sales in 2012, more than doubling its 2006 total with consistent growth. The E-Class is Canada’s 48th-best-selling car in 2016, up 10 spots from a year ago. Seven premium brand cars sell more often — all have a lower base price.

South of the border, the E-Class (CLS included) ranks 39th overall after sliding 6% through the first nine months of 2016. Mercedes-Benz is on pace to sell roughly 50,000 E-Class vehicles and CLS-Class sedans in 2016 after routinely selling significantly more than that in the half-decade prior. The E-Class remains a segment leader, and sales have improved in each of the last four months. Only four premium brand cars, all with significantly lower base prices, sell more often in America. But the U.S. market, like Canada’s, is moving towards SUVs/crossovers like Mercedes-Benz’s own GLE.

SHOULD I BUY SOMETHING ELSE INSTEAD?
For purer driving dynamics, consider the Cadillac CTS, the standard-bearer for athleticism in this segment. At $56,125, the CTS is equipped with a 3.6L V6, all-wheel drive, and Cadillac’s Luxury trim level.

The most reliable midsize luxury sedan is likely to be the Lexus GS, which is priced around $60,000 with a 3.5L V6 and all-wheel drive.

The BMW 5-Series will be new for 2017, the Audi A6 is a class act, and the Jaguar XF is an outside-the-box option that comes standard with a highly efficient diesel engine. 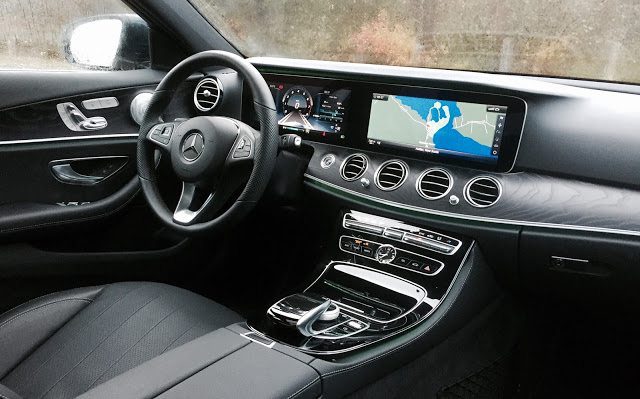 HOW MUCH SHOULD I PAY?
The Intelligent Drive package is so popular that, “It’s temporarily unavailable for order, due to the fact that demand for the package surpassed our expectations and we have already reached our allotment,” Mercedes-Benz Canada spokesperson Nathalie Gravel told GoodCarBadCar. That’s fine with me, though clearly consumers find the features highly desirable.

WHAT’S THE VERDICT?
The fifth-generation Mercedes-Benz E-Class isn’t the sports car of the midsize luxury class, but it shouldn’t be. Indeed, we’re glad it isn’t. With more than enough capability to tackle a twisty road, the new E-Class nevertheless proves that it’ll be more than capable of holding top-of-class sales honours because of the way Mercedes-Benz has succeeded in building an eminently comfortable car.

Exemplary ride quality, excellent noise and vibration cancellation, an efficient and effective powertrain, and an exterior design that places the E-Class at the core of Canada’s most popular luxury line combine to make the E300 4Matic the embodiment of what a car in this segment should be.

Mercedes-Benz does demand top dollar. As a result, enthusiast buyers may seek out alternative hi-po options that cost less than our E-Class tester. The 2.0L turbo is sufficient, but at more than $70,000 as tested, E300 4Matic buyers are spending a lot of money for 241 horsepower. Waiting for the E400, powered by a 3.0L twin-turbo V6, is an option, of course. But Mercedes-Benz will want more money for that car.

Timothy Cain is the founder of GoodCarBadCar.net, which obsesses over the free and frequent publication of U.S. and Canadian auto sales figures. Follow on Twitter @goodcarbadcar and on Facebook. The E-Class was supplied by Mercedes-Benz Canada’s press office.