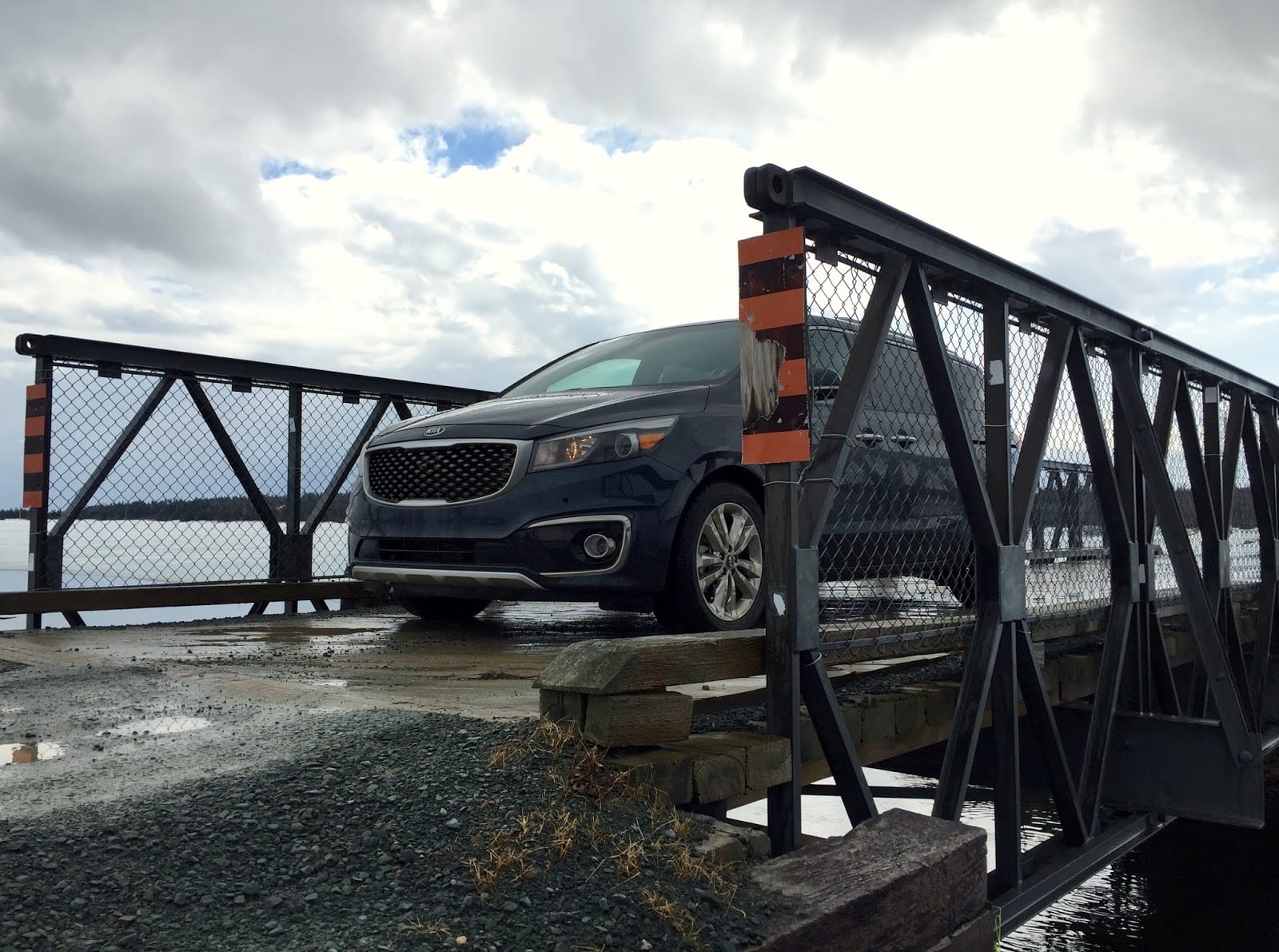 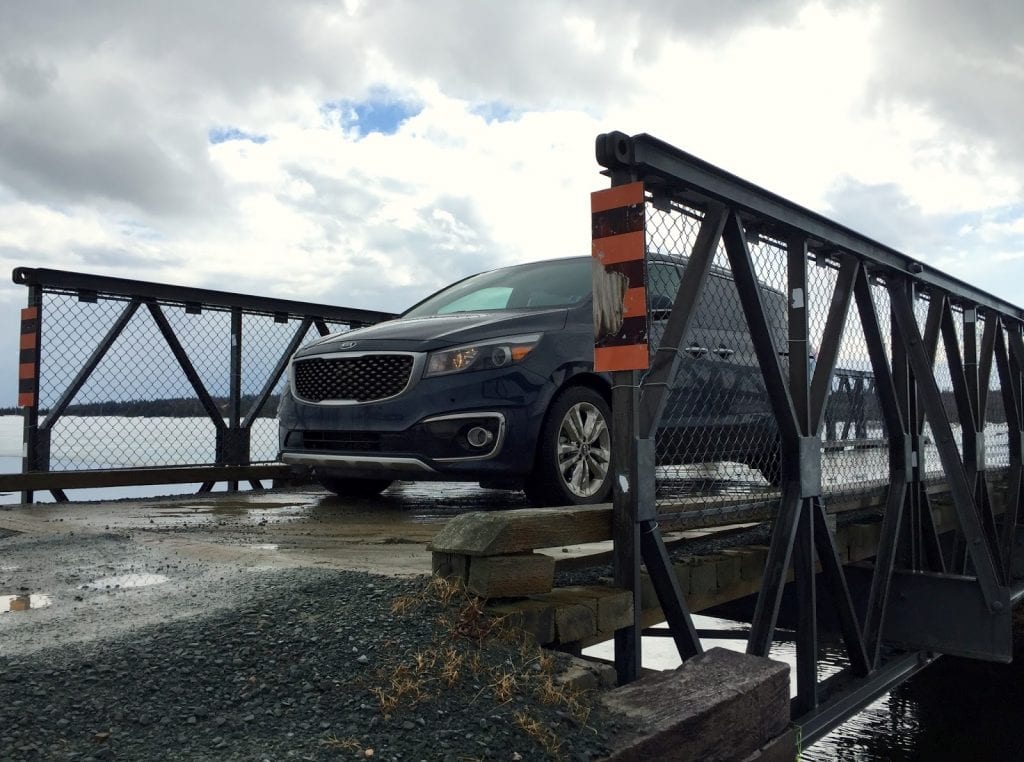 The Sedona is, however, a relatively successful foray into the North American MPV sector. It’s strengthened by decent on-road behaviour, a high-quality interior, a superb powertrain, and styling that made the neighbourhood teenagers say, “That’s actually really nice.”

So what’s up with that “relatively” qualifier? Regardless of how well executed the third Sedona is, we won’t be able to liken this van’s marketplace success to that of the Sienna, Odyssey, or Grand Caravan. In the latest Sedona’s best sales month so far, January 2015, sales of Canada’s best-selling minivan, the Grand Caravan, were more than 1000% stronger.

Yeah, it’s actually really nice, but demand won’t be high, and with that fact in mind, Kia won’t ladle out excessive inventory to dealers. 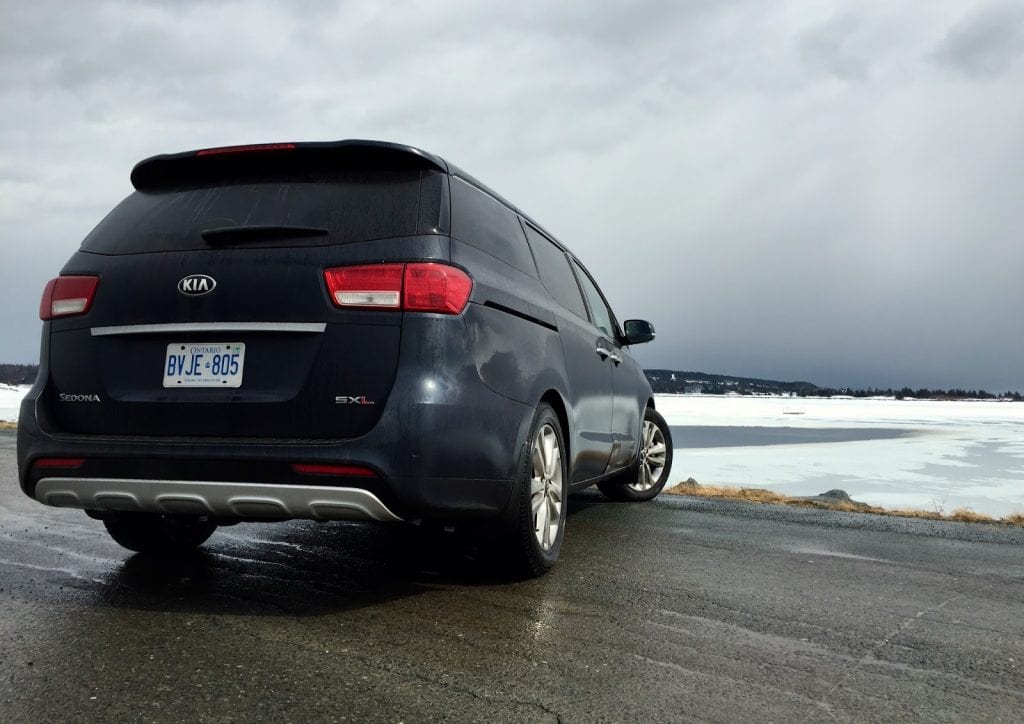 Even accepting the verdict of the local street hockey snipers, you’re right to believe that Kia didn’t build the perfect family minivan. But this is a whole lot of vehicle to cover, so we’re breaking this review into five sections, working from back to front so more bases can be covered systematically. It’s a utilitarian review of a utilitarian product, albeit a surprisingly style-conscious one.

The difference in cargo volume isn’t really noticeable until the third row is folded, at which point the other vans offer between 6% and 19% more capacity for newly purchased kitchen appliances.

Such comparisons don’t do the Sedona any favours, but they do something of a disservice, as well, masking the sheer livingroom-like space of the cargo area in any modern minivan, Sedona included.

ROW THREE
Do you want to sit back here? Of course not, but you’ll prefer it to the third row in three-row crossovers. It’s certainly not as spacious or comfortable as the Odyssey’s rear cabin, but it’s nice to have options for access. 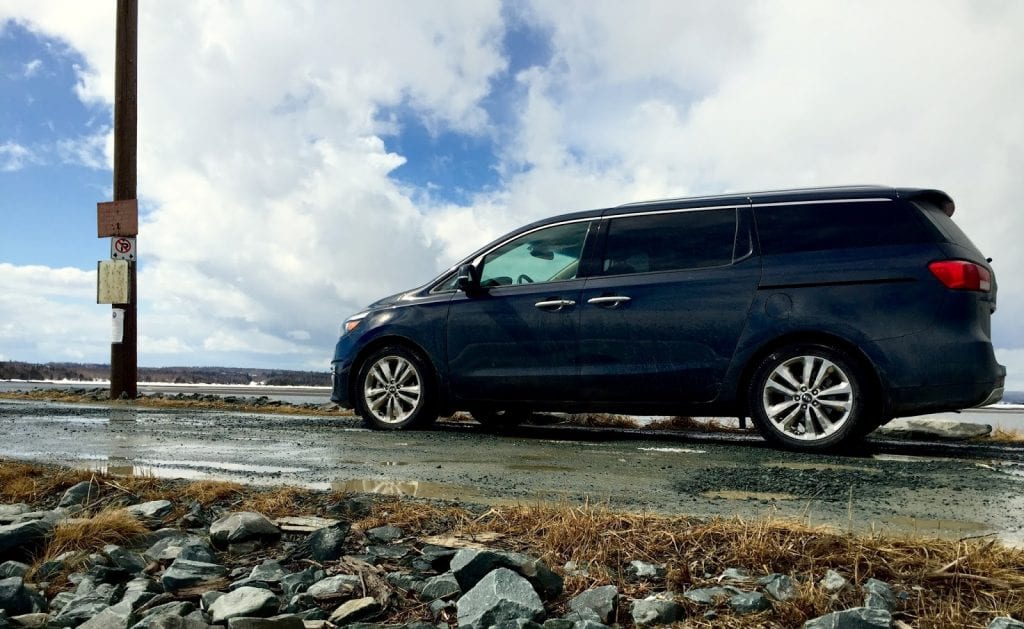 Because the Sedona’s second row captain’s chairs pivot side to side, a passenger banished to the third row can choose to move on back either through the gap between the second-row seats (this fully loaded SXL+ model isn’t available with eight seats like some Sedonas) or, with the second-row seats moved inward, along the side of the van instead.

That’s a useful tool, because the gap through the middle isn’t sufficiently broad even when manually widened. 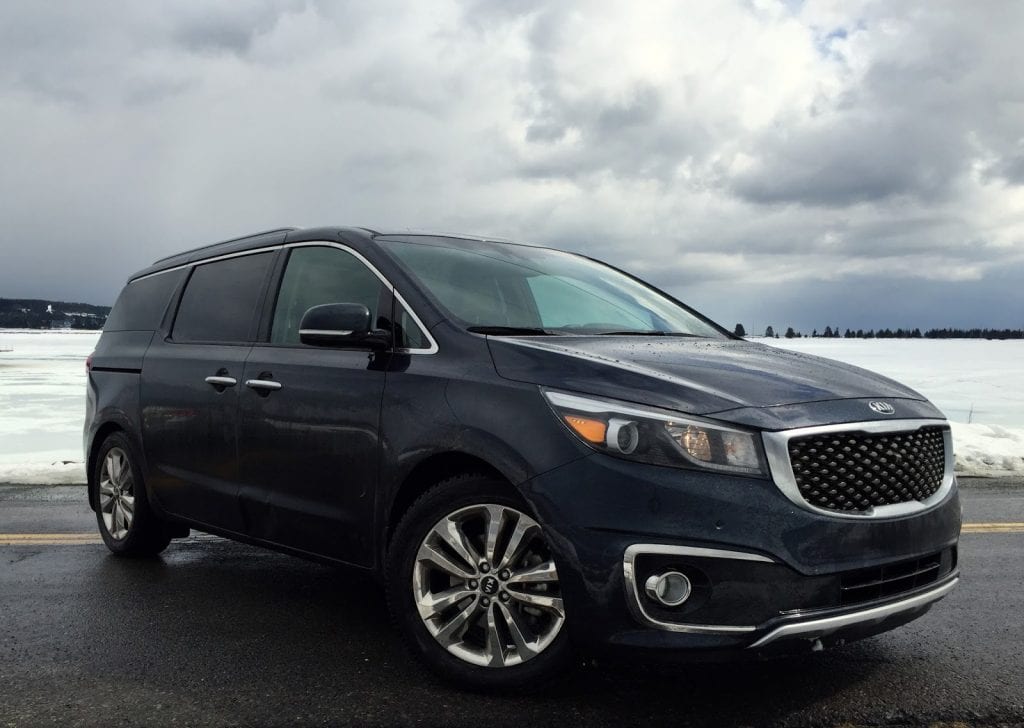 ROW TWO
If your concern with the Sedona’s second row was its lack of Stow’N’Go capability or its non-removable status – most Sedonas can stand their seats upright – then the top-trim model will disappoint from a flexibility standpoint. This SXL+ Sedona’s two middle chairs can’t be folded, removed, or stacked upright.

They can, however, be pushed way back into a third-row-knee-crunching position, steeply reclined, and then maxed out with an extendable footrest. The lankier among us won’t be able to fully realize the comfort of this legs-extended setup, but it rivals or surpasses the Sienna for second-row supremacy.

As a family van, this arrangement is unseemly. There’s also no factory DVD, the seats move around like super glue was recently poured in the tracks, and the central pass-through between the front seats is stuffed full by a tall console like you’d see in any SUV.

So of course the Sedona can’t challenge the Grand Caravan as a pickup truck alternative. But as a continental tourer for older citizens who need to ferry grandchildren around with some frequency, the Sedona impresses. Taking a few snowbirds to Florida for the winter? In that case, a collapsed third row and a Rolls-Royce-aping second row is a lot more enjoyable than a van that does double duty as a truck at Home Depot on the weekends. 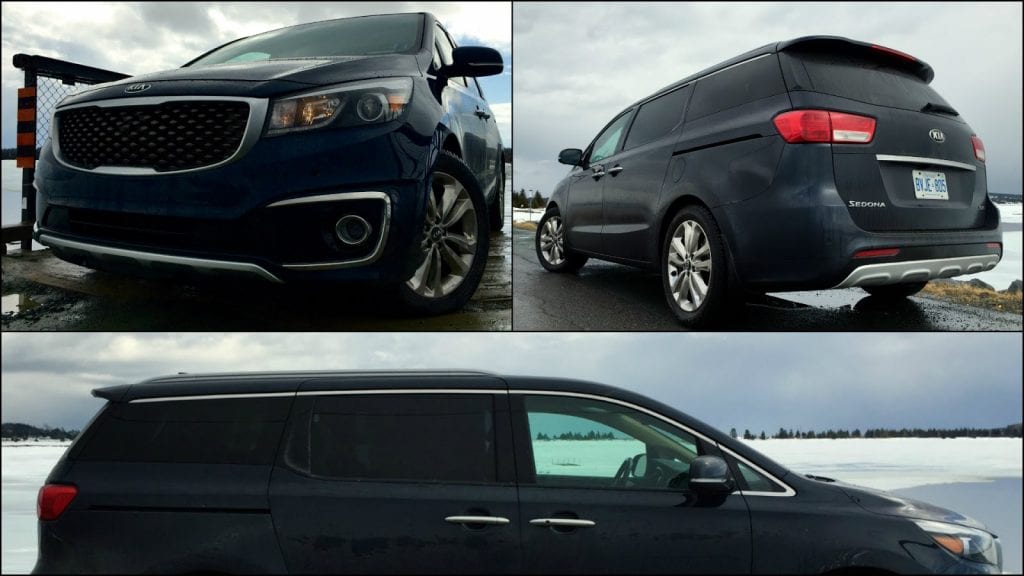 UP FRONT
The 2015 Kia Sedona’s high points are mostly evident where the adults reside. From Kia’s straightforward UVO interface to the pleasing materials, a throttle pedal that provides access to a responsive 3.3L V6, a spacious passenger footwell, and quiet A-pillars, this is the area of the Sedona that makes other minivans look like second-class citizens that were developed in a prior decade. 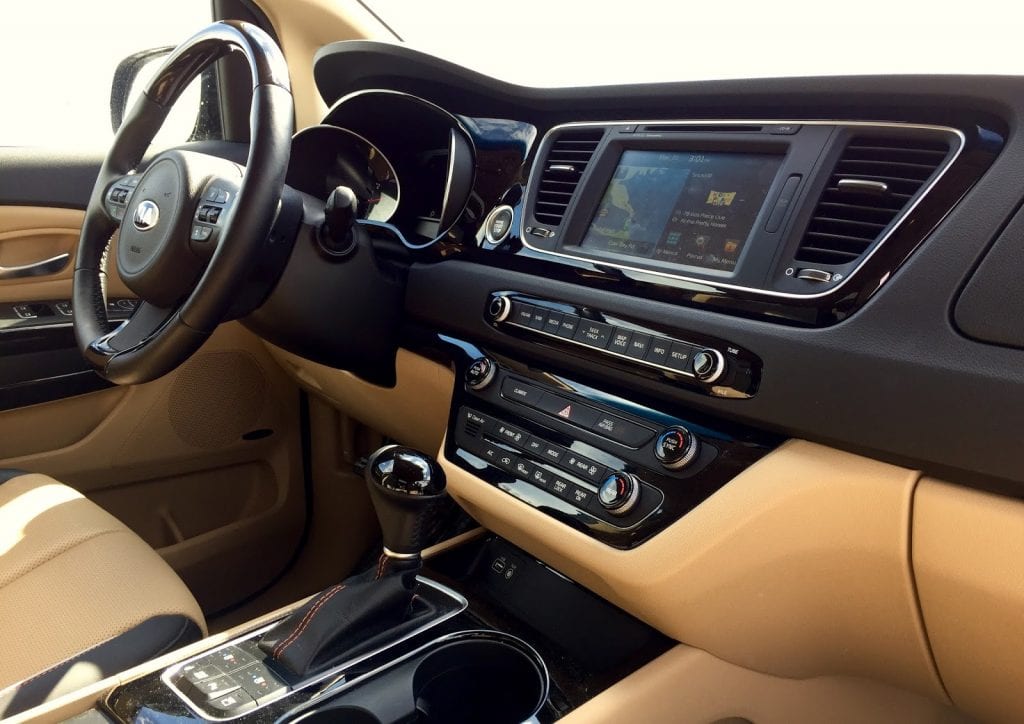 Away from straight lines, however, the Sedona’s comfort-first philosophy causes the van to wallow about in ways that would nauseate an Odyssey owner and disappoint a Sienna driver. Ride quality is always impressive, but with lifeless and slow steering and more than 4700 pounds to cart around, this won’t be the MPV that makes you say, “car-like.”

SXL+
This is not your aunt’s Mercury Villager. In Canada, 2015 Sedonas start at $29,260, but that L trim doesn’t have alloy wheels, auto headlights, heated seats, or a backup camera. The $31,760 LX adds those items, among other things, but it doesn’t offer tri-zone automatic climate control, a heated steering wheel, blind spot monitoring, heated second row seats, or power doors, for which you’ll need to step up to the $37,360 SX. 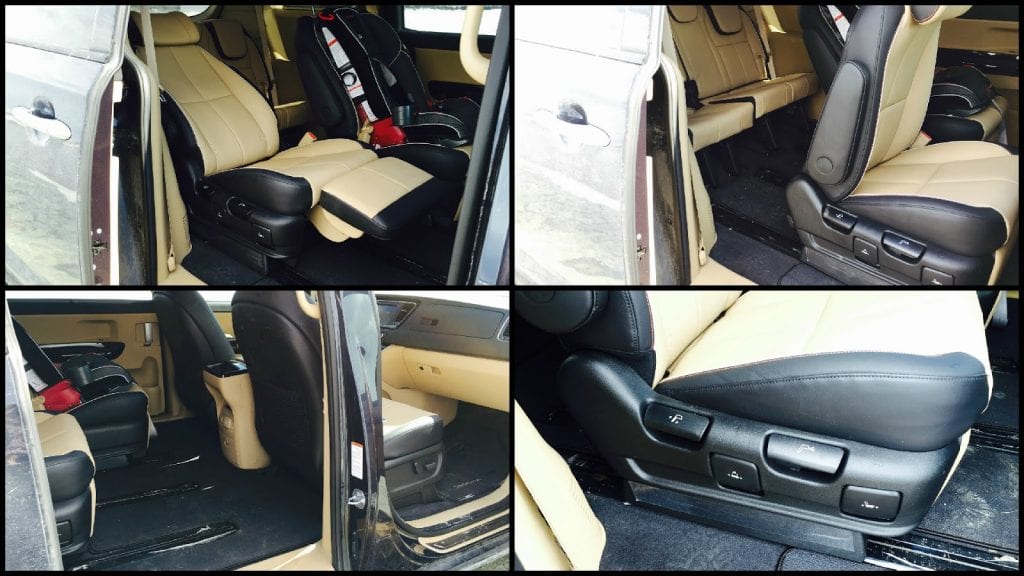 The $42,760 SXL bumps up the luxury quotient with Nappa leather, cooled front seats, dual sunroofs, and the second-row lounge seating. The Sedona tops out like our tester as a $47,960 SXL+ with smart high beams, 8-speaker Infinity audio, navigation, a surround view monitor, adaptive cruise, and more safety kit.

But on the outskirts of the minivan market there have always been buyers who didn’t prioritize the manifestation of fertility. As luxurious long-haul transportation in lieu of a full-size sedan, the 2015 Sedona SXL+ is, well, actually really nice. Unfortunately for Kia, I’m one of the guys with a growing family, and though the Sedona is a pleasant place in which to spend time, it simply doesn’t nail an acceptable number of key minivan ingredients. 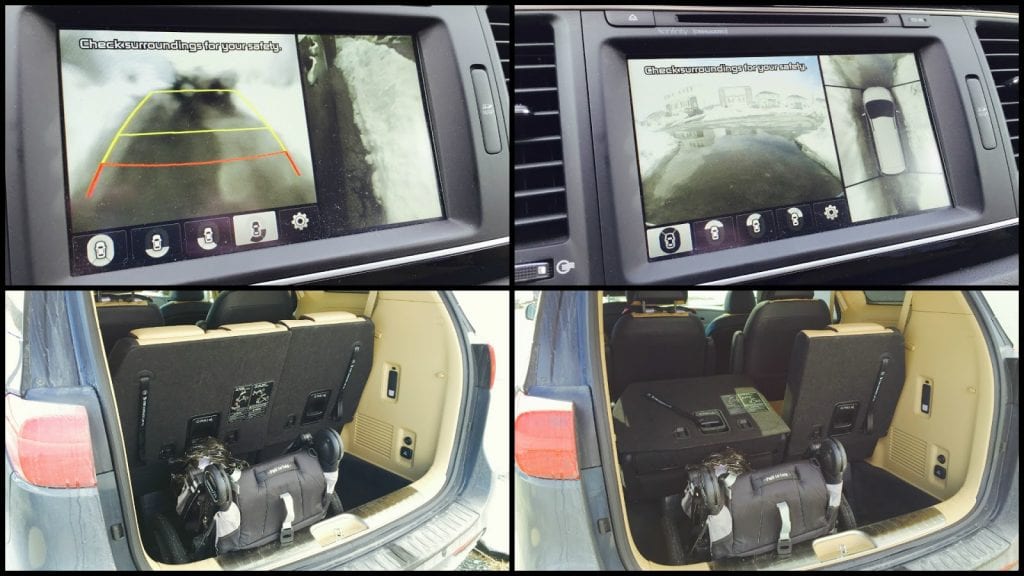