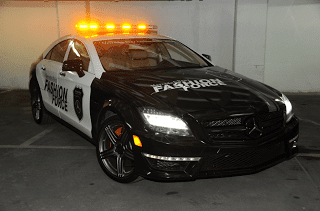 The Mercedes-Benz CLS-Class hasn’t aged as well as we’d like. In its first incarnation, the CLS was a trendsetter; a swoopy and stylish sedan Mercedes-Benz liked to call a coupe. That’s not to say the second-generation CLS-Class isn’t an eyecatcher. But there’s no way it’s as good-looking as the W219 CLS Benz. This, however, isn’t stopping Mercedes-Benz from using the CLS-Class as a fashion policemobile during New York’s fashion week, as I noticed on Autoblog earlier today.

True, the Mercedes-Benz CLS63 AMG driven around Manhattan by style-conscious New Yorkers will not be on the lookout for offenders. Stacy and Clinton, they ain’t. The 2011 Mercedes-Benz CLS63 AMG is scanning the sidewalks for fashionable trendsetters and then giving them a lift, some tickets to runway shows, and a picture or two. You’re wearing mom jeans? Uh… keep walking. Haute couture? Get in the car. 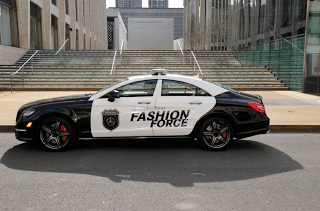 Mercedes-Benz Fashion Week is a big promotional event for the Stuttgart firm. Even though we might find clips of middle-aged tourists wearing Hawaiian shirts over wrinkled khakis humourous, Mercedes-Benz is sticking with the less controversial, friendlier plan. Could they have used the more stylish SLS AMG? An enthusiast would’ve hoped so, but impracticalities get in the way with that Gullwing-doored two-seater. The GLK would have been my pick, but Mercedes-Benz is keen on touting the supposed style of its new big-engined four-door coupe.

But where are they gonna stretch the 507-bhp CLS’s legs in Manhattan? There’s a whole lot of pent up energy in a twin-turbocharged V8. Restricting it to taxi/police duty in New York City is as inappropriate as tasking a Chevrolet Aveo with land speed record breaking at the Bonneville Salt Flats.