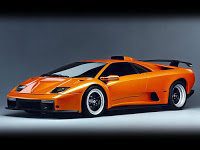 hat YouTube videos were viewed 9 billion times in July. 382,000,000 of those 9,000,000,000 were automobile related. D’as right – people love to watch cars. So do you, because you are people. And so here’s an opportunity: follow this link to a German-language video on YouTube of one very strong man holding back a Lamborghini Murcielago.

Typically, GoodCarBadCar likes to embed the videos so you don’t escape from the GCBC Nation, but today you’re allowed to leave if you promise to return. The video isn’t short, but as per typical YouTube clips; it ain’t long either.

This man isn’t pulling a Lamborghini, oh no. That’s easy. I mean, anybody can do that. Dude is actually restraining the Murcielago, which, with constant high revs from its high-horsepower engine, eventually roasted the clutch.

Murcielago’s never possess anything less than 572 horsepower. Once the clutch on the Murci’ dies, its predecessor enters the ring. The Diablo forces the man to let go of his hold. But only after much smoking of tires and revolutions of engine.