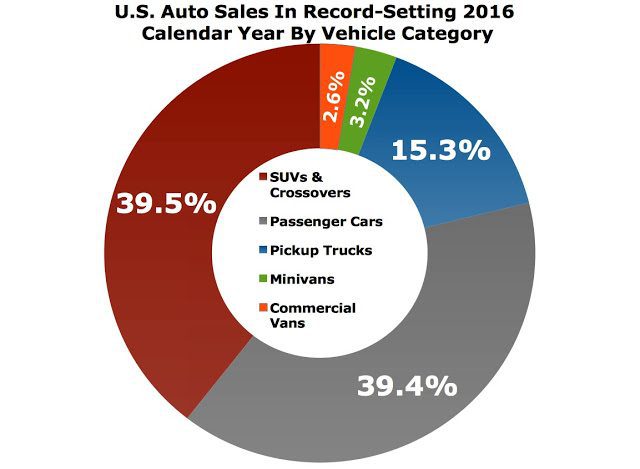 The lion’s share of new vehicles sold in the United States of America during calendar year 2016 were SUVs and crossovers.

Just under 40% of the new vehicles sold – 6.93 million of the 17.55 million total vehicle sales – were SUVs and crossovers, a category led in 2016 for the fifth consecutive year by the Honda CR-V. Within that category, traditional body-on-frame SUVs accounted for 11% of the sales.

Passenger car volume was only slightly less numerous. Indeed, depending how you label certain cars and certain utility vehicles (Subaru Crosstrek? Honda HR-V? Volvo V60 Cross Country?), sales were essentially level from one category to the other, as our market share chart shows.

Pickup trucks, similarly enjoyed a rapid sales expansion in 2016, though pickup truck volume isn’t yet back to the levels seen prior to the recession. Americans registered 2.7 million new pickup trucks in 2016, a 6% increase compared with 2015, but still below the 3.2 million pickups sold in 2005.

Minivans, like pickup trucks, don’t sell at the levels they did prior to the recession. After a strong start to the year, minivan volume ended up rising 6%. (Sales declined sharply over the final five months of the year after jumping 23% through July.) 3.2% of the new vehicles sold in America in 2016, or 553,506 units, were minivans. Americans registered more than 1 million minivans as recently as 2005.