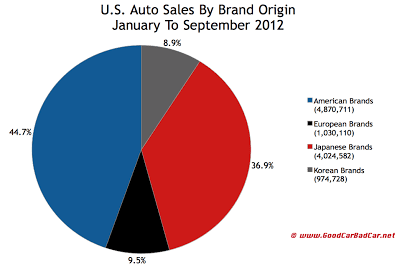 Pie charts: an essential ingredient in any recipe for successful sales analysis. Today we’re looking at the U.S. auto industry in the first three quarters of 2012. How does the volume generated by America’s ten automobile brands compare with that which is achieved by Japan’s eleven brands, South Korea’s two brands, and Europe’s seemingly countless logos?

Through nine months, 45% of the American automobile market was owned by Detroit: Buick, Cadillac, Chevrolet, Chrysler, Dodge, Ford, GMC, Jeep, Lincoln, and Ram. Of those 4.87 million new vehicle sales, fully one-third were Fords. Another 29% were Chevrolets. Dodge and Ram combined for 12.5%.

Just under one out of every ten new vehicle sales in the U.S. so far this year was of the European variety, at least in name: Audi, Bentley, BMW, Fiat, Jaguar, Land Rover, Maserati, Mercedes-Benz, Mini, Porsche, smart, Volkswagen, Volvo, and ANDC estimates for Aston Martin, Ferrari, Lamborghini, Lotus, Maybach, and Rolls-Royce. Volkswagen accounted for more than three out of every ten Euro brand sales. Audi, BMW, Mercedes-Benz, and Porsche delivered half of the 1 million European auto brand sales in the United States this year.

The four accompanying charts go into some detail explaining all this. Click any of the four for a larger view. For a look at specific cars, use the first dropdown menu at GCBC’s Sales Stats home to select a brand and then a model. Brands are ranked by U.S. volume every month, most recently with up-to-date September 2012 sales figures.