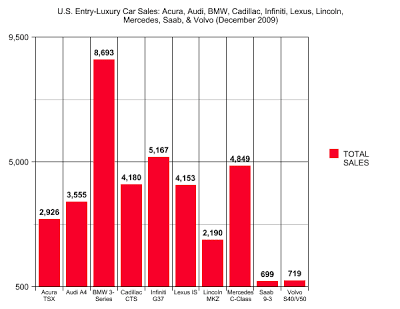 COMPARING SALES OF ENTRY-LUXURY CARS IN THE USA (DECEMBER 2009)

Home
All Vehicle Rankings
Entry Luxury Car Sales
In the coming months, a transition to a new luxury segment may well occur for a Graph just like the one you see below. As in November’s identical lineup, the BMW 3-Series walks away from all competitors and sells significantly better than many similarly-sized mainstream cars. After a while, it gets a little boring to point out that BMW sells way more editions of the 3-Series than the Lexus IS and Cadillac CTS…. combined. Time in and time out, it becomes all too easy to predict that the BMW 3-Series makes other successful luxury cars – Mercedes C-Class or Audi A4, for instance – appear unsuccessful.
Nevertheless, the figures from December’s U.S. Sales Stats are now viewable. The 2009 Year End Graph should be up and running soon, too.