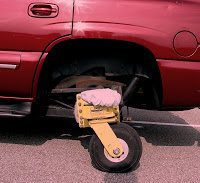 SKID MONSTERS IN A CHEVY TAHOE

One of four exercises in the Advanced Driving Techniques course General Motors offered to us at the Milford Proving Grounds was Skid Monsters. For those of you who drive in snowy climes and participate in snowstorm-parking-lot-endeavours, this skid exercise would not have taken you totally off guard. For others, spins were a common sight.

Spins are fun, though. No harm was done. Warnings were given regarding loose objects in the car – including cameras – because when that spin starts; it continues. And endures. As you can see in the photos, the rear wheels of this old-style Chevrolet Tahoe have been replaced by casters more akin to that on shopping carts.

Speeds were relatively slow, perhaps the pace you’d be traveling on lightly trafficked city streets. As we drove straight at a row of cones, the instructor would eventually call “right” or “left”. We were to drive to that side of the row of cones, but not outside the furthermost pylon. Before this turn happened, the instructor had pressed a button on his own controls to ‘loosen’ the rear ‘wheels’. They just spun around and around and around. The goal was to steer the car toward the end target, the centremost route between the two pylons at the end of the track. Looking through the cones as far as your eye can see and constantly aiming for what you see there (a yellow tree or a grey pole or whatever) regardless of which direction your nose is pointed. If your steering reactions were smooth and you kept your eyes on the target, success ensued. 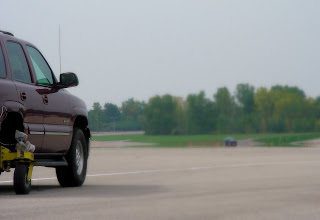