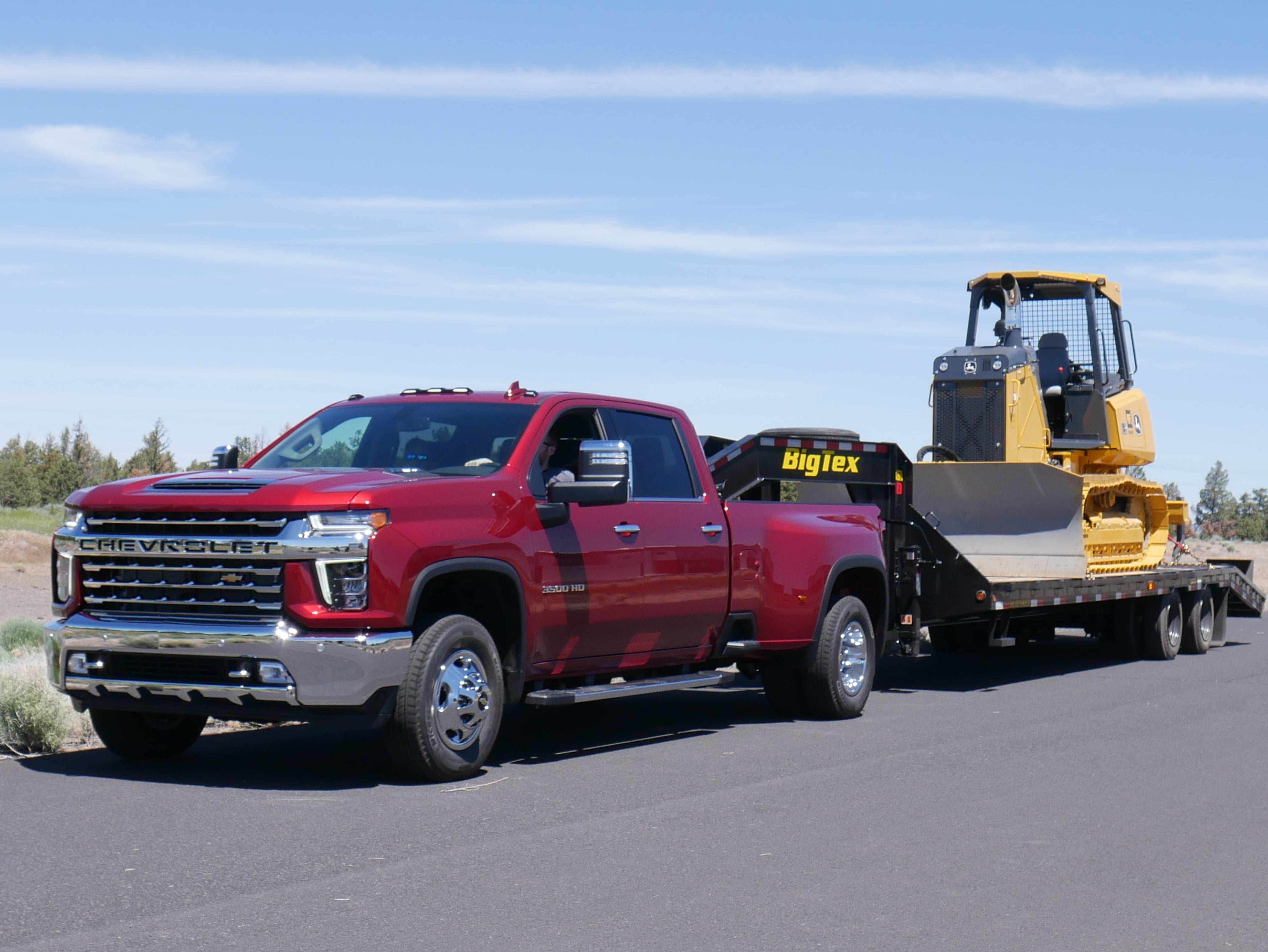 The heavy-duty truck market is unlike it has ever been before. The pickup trucks are more powerful, tougher, more civilized, and better than ever before at towing and hauling just about anything you can think of.

The Silverado HD has some venerable competition in the Ford Super Duty and the Ram Heavy Duty, but Chevy made a point of upping the ante in many ways. The company recently invited us out to Bend, Oregon, to drive their new beast of a truck. 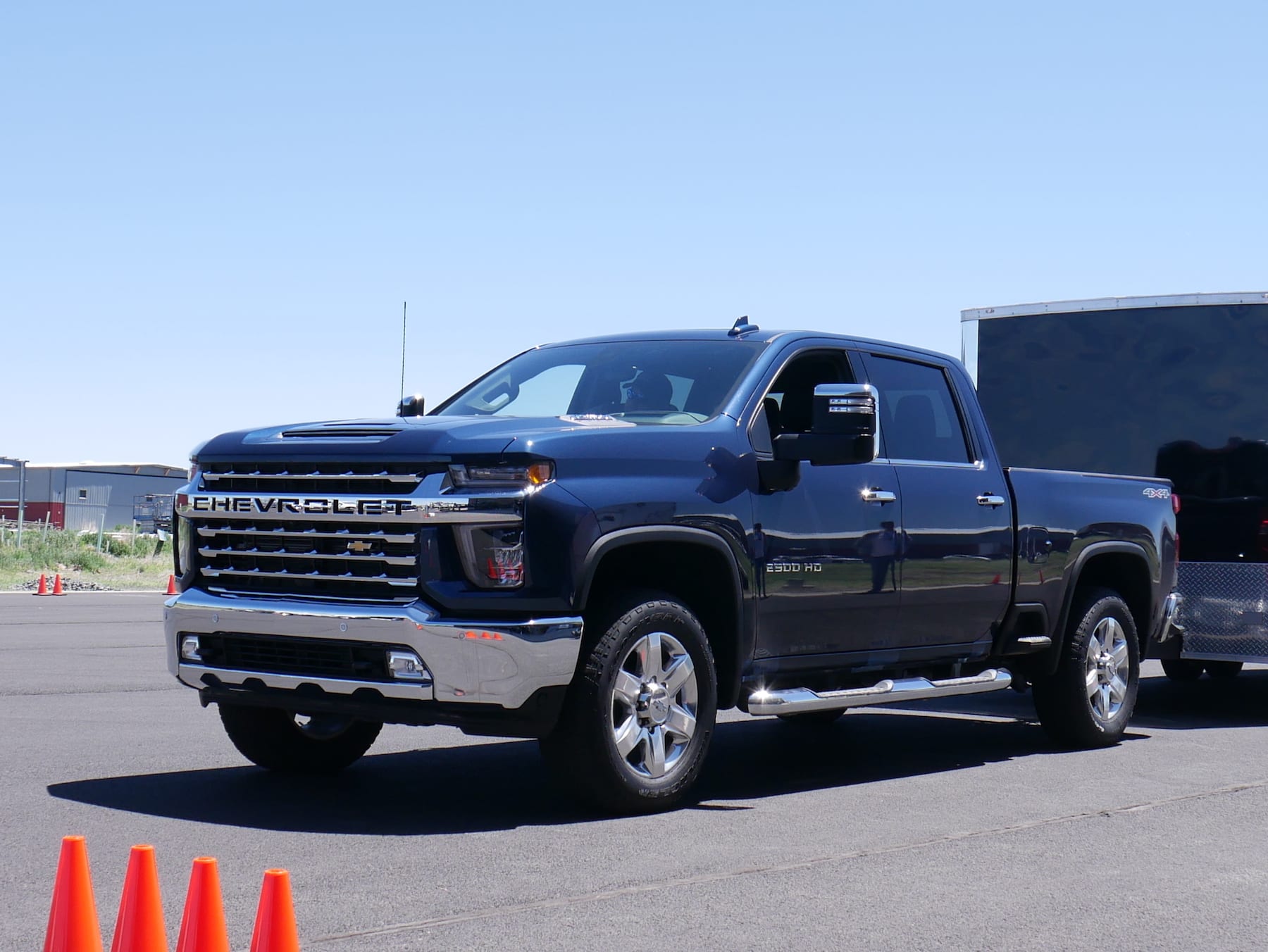 The Silverado HD is Chevy’s entrant into the heavy-duty pickup market. It’s new 2020 model is bigger and better than ever before. Chevy updated it in every way, going over the powertrain, technology, styling, and cabin. The truck comes in five different trim levels, three different cabs sizes (regular, double, and crew), two different bed sizes (standard or long), two or four-wheel drive, and either single rear wheel or dual rear wheel configurations.

The list of optional technology and features is long. Chevy has a heavy duty designed for everyone, giving you the opportunity to buy a good, basic work truck or am an optioned-out luxury towing machine.

There are two big honking V8s to choose from. The Silverado HD can be had with either a 6.6-liter V8 engine or a 6.6-liter Duramax turbodiesel V8 engine. The 6.6-liter gasoline engine is mated to a six-speed automatic transmission while the big Duramax gets GM’s newfangled 10-speed from Allison.

While the displacement for the engines might be the same, the engines are completely different in every other way. The gas makes 401 hp and 464 lb-ft of torque. The diesel engine makes 445 hp and a whopping 910 lb-ft of torque. That’s not class leading, but Chevy claims the acceleration numbers for the Silverado beat out Ram’s HD pickup which takes the crown when it comes to torque. 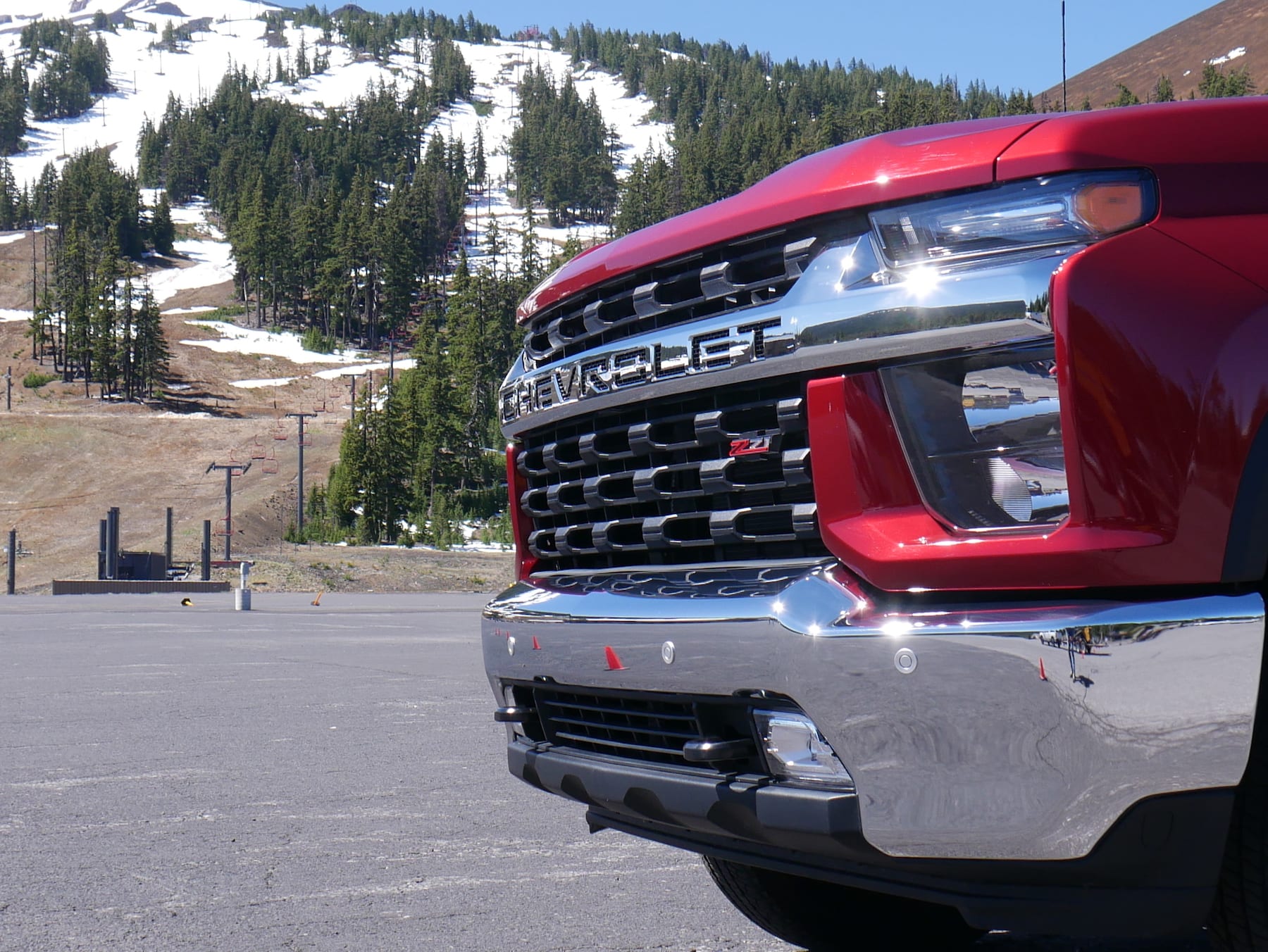 Also, the diesel engine is supposed to be able to access all of its torque at the bottom of the rev range, meaning it has more usable torque than its competitors. In dually form, the Silverado HD has access to all 910 lb-ft in first gear.

Journalists got to experience what it’s like to tow 35,500 pounds, too. Chevy had us in a top of the line 3500 HD dually and had a trailer weighing that much on a closed course. I had the experience to tow the load around a small airport, and I have to say I’m impressed with the way it handled the weight.

Chevy also packs more capability into every spot in its range than its competitors. In other words, the lowest version of the Silverado HD will outdo the competitors lowest versions of the truck. It’s only when you start to get to the top of the trim levels and options that Ram’s and Ford’s pickups start outpacing Chevy’s machine, and that depends on the configuration. This means you tend to get more bang for your buck with the Chevy.

It Looks Big and Silly

I will not mince words when discussing the Silverado HD’s exterior. It’s ugly. It’s like a bigger and—Chevy would like you to believe—more badass version of its 1500. The Silverado 1500 isn’t exactly beautiful, and Chevy made many of the non-beautiful areas of the truck larger and more prominent, including the massive grille.

The PR folks told me that the company wanted to differentiate the HD from the full-size line. They did this by making it bigger and uglier. It looks like a big appliance with huge wheels, and I guess that’s exactly what it is.

The only sheet metal the HD truck shares with its smaller counterpart is the roof. Otherwise, it’s all new body panels. However, the styling is similar, it’s just the HD takes things up a notch, and I can’t say that’s a good thing.

With that said, I should note that just because I don’t like it doesn’t mean other people won’t. I’m sure this monstrosity tickles some folks in all the right places. Also, if you’re buying a towing and hauling machine like this, looks are pretty far down on your list of priorities. Still, that shouldn’t mean you’re forced to buy a big air-conditioner-looking pickup truck.

Comfy and Spacious, But Not the Best

Heavy-duty trucks used to be work machines only. That’s not the case anymore. A heavy-duty truck needs to be comfy and spacious for everyday cruising. While people buy these things to tow boats and heavy trailers, they also drive them to do everyday things. The interior has to be comfortable and useful.

The interior of all the trucks in this segment reflect this. The Chevy is no different. The Silverado HD’s interior is the best HD interior that Chevrolet has ever produced. With that said, it’s not the best in the segment.

The cabin is cavernous. The seats are comfortable, and the infotainment center is excellent, but Ford and Ram have better interior materials, just as much space and comfort, and slightly better infotainment systems. GM still uses cheaper plastics and some other materials. These touches aren’t a dealbreaker, but they’re notable. If I wanted a truck to look as good as it is at towing, I’d have to turn to Ford or Ram.

That said, Chevy’s interior is good. If you’re not nitpicking, you’ll likely find the interior just fine. Chevy took pains to put the right materials in the right places. It’s only once you start eyeing the details that you notice Ford and Ram stepped their game up a little more.

Chevy had all the journalists bring along someone who wasn’t that used to towing or had never towed. They had the journalists do an obstacle course run with a 25-foot trailer and no help from the towing tech. Then Chevy encouraged the folks with limited or no towing experience to do the same course with the technology enabled. The difference was clear. The technology makes it much easier.

Perhaps the coolest feature that Chevy debuted is the invisible trailer feature (shown above). It’s exactly what it sounds like. It makes the trailer more or less disappear. As I understand it. The other cameras installed on the trailer can recreate the image for you on the infotainment screen so you essentially have a rearview mirror view behind you. It’s not perfect, but it’s darn good.

In addition to all that is the fact that Chevy offers you up to five distinct trailer profiles that you can set. All you have to do is set up the cameras one time. Then when you hitch up, you select that specific profile and all the tech is ready to go. If you borrowed a trailer, you can add it as a guest and that will not save the trailer’s profile. This helps cut down the time and amount of work involved.

Also, the trailer tech interfaces with the MyChevy app. This allows you to track mileage, maintenance intervals, tire pressure and temperature, and other features through the app when you’re not in the truck.

Chevy also teamed up with ASDFAS and ASDFs to get in good with the RVing crowd. With the MyChevy app, you can connect it to your RV and use many of the RV’s features from the phone. This helps make it easier to set up your RV once you reach your destination and puts all your controls in one spot. 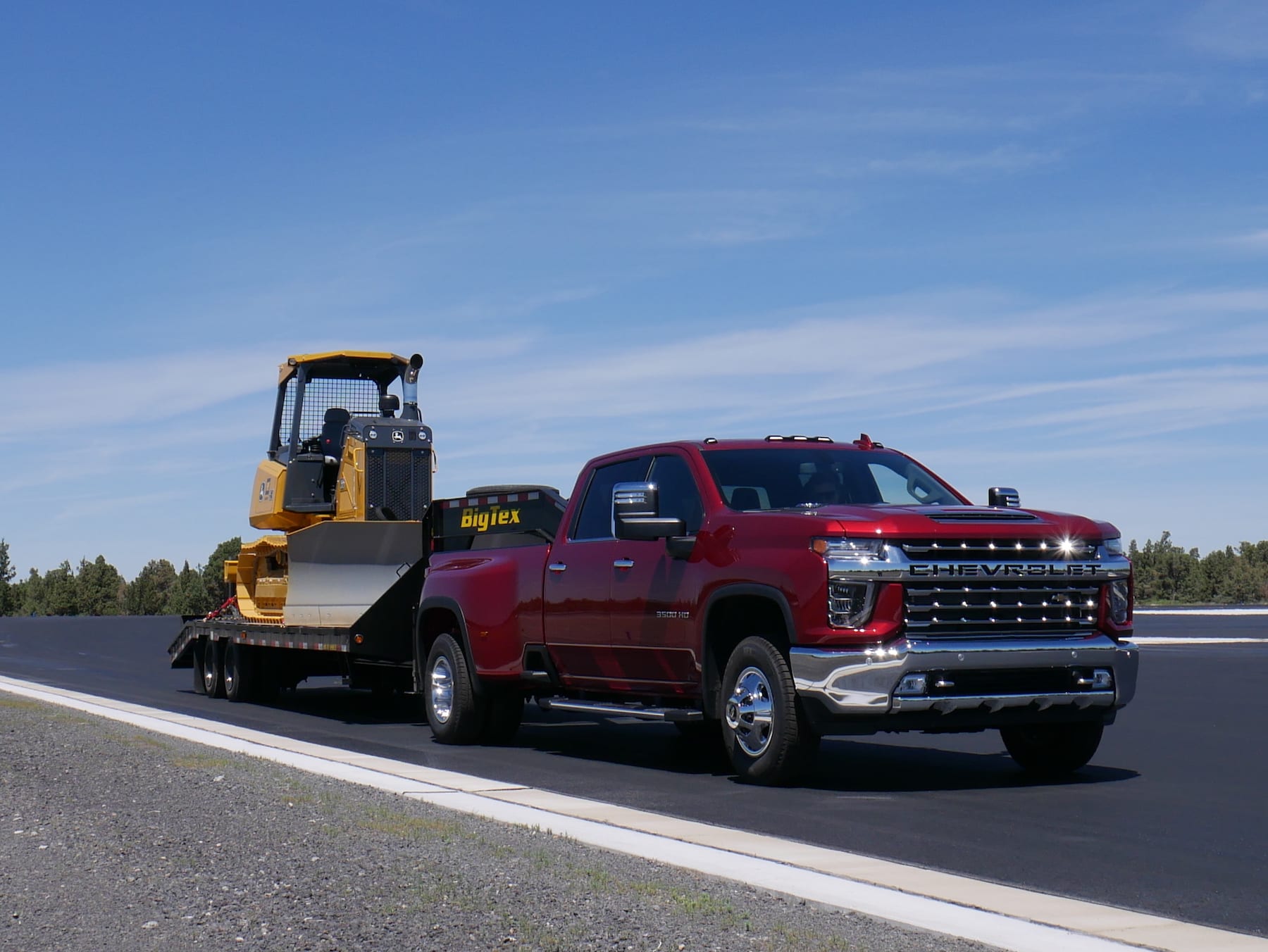 Chevy’s Silverado HD is big and it should be. It’s a heavy-duty truck. The company made it even bigger for 2020.

In other words, good luck getting this thing into your garage. With that said, the current comparable Ford and Ram heavy-duty pickups are similar in size. They’re massive, too. Ford’s truck measures a little longer in the long wheelbase version. In the short wheelbase crew cab version, it’s identical. Ram’s Heavy Duty comes in at about 260 inches, which puts it on par with the competition.

Chevy managed to sneak in some good qualities with the size of its truck. The company pointed to its class-leading bed volume. Chevy also put a power tailgate on that bed, making it easier to utilize all that space. 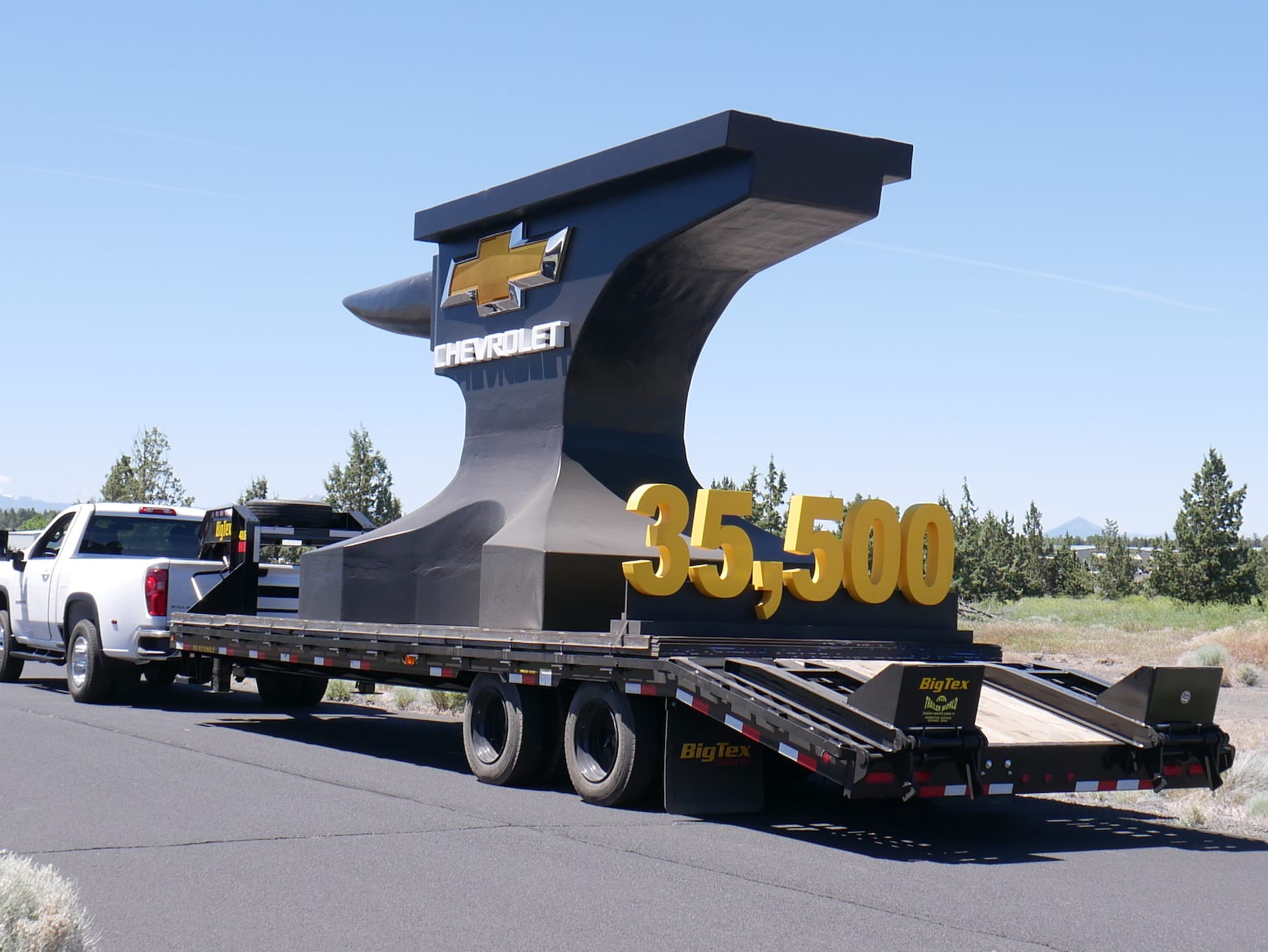 Undoubtedly, yes. In addition to the 35,500-pound towing experience I mentioned before, I drove the gasoline engine up Mt. Bachelor outside of Bend, Oregon, and it has plenty of power. From there, we hooked up a trailer, and I towed over 12,000 pounds with that same truck. It handled the trailer well. The engine was getting a little bit of a workout, but it had room to go before taping out. Even up inclines and at high altitude, it had the juice to get the job done.

The diesel was another matter. It towed like there was nothing behind it. We had over 14,000 pounds behind the truck during my time in that vehicle. Chevy put a different weight distributing hitch on the trailer, so that likely had an effect, but the engine worked flawlessly and the Allison-sourced 10-speed transmission always seemed to be in the right gear to deliver all the torque and power in the right ways.

In short, Chevrolet has two good engines for its HD pickup. The best one is easily the diesel, but it’s more expensive and the gasoline engine still provides plenty of capability. Chevy said that the majority of commercial sales actually go to the gasoline engine, so they had to do some work to it and keep a gas engine in the lineup that was strong. I’d buy the diesel, but the gas is not a bad choice.

The towing tech out on the road eliminates many of the towing woes a lot of people will have. I don’t tow every day or even every month. I’m reasonably comfortable with a trailer behind my pickup, but the cameras and towing systems on the new HD make towing easy. The tech is worth the money. 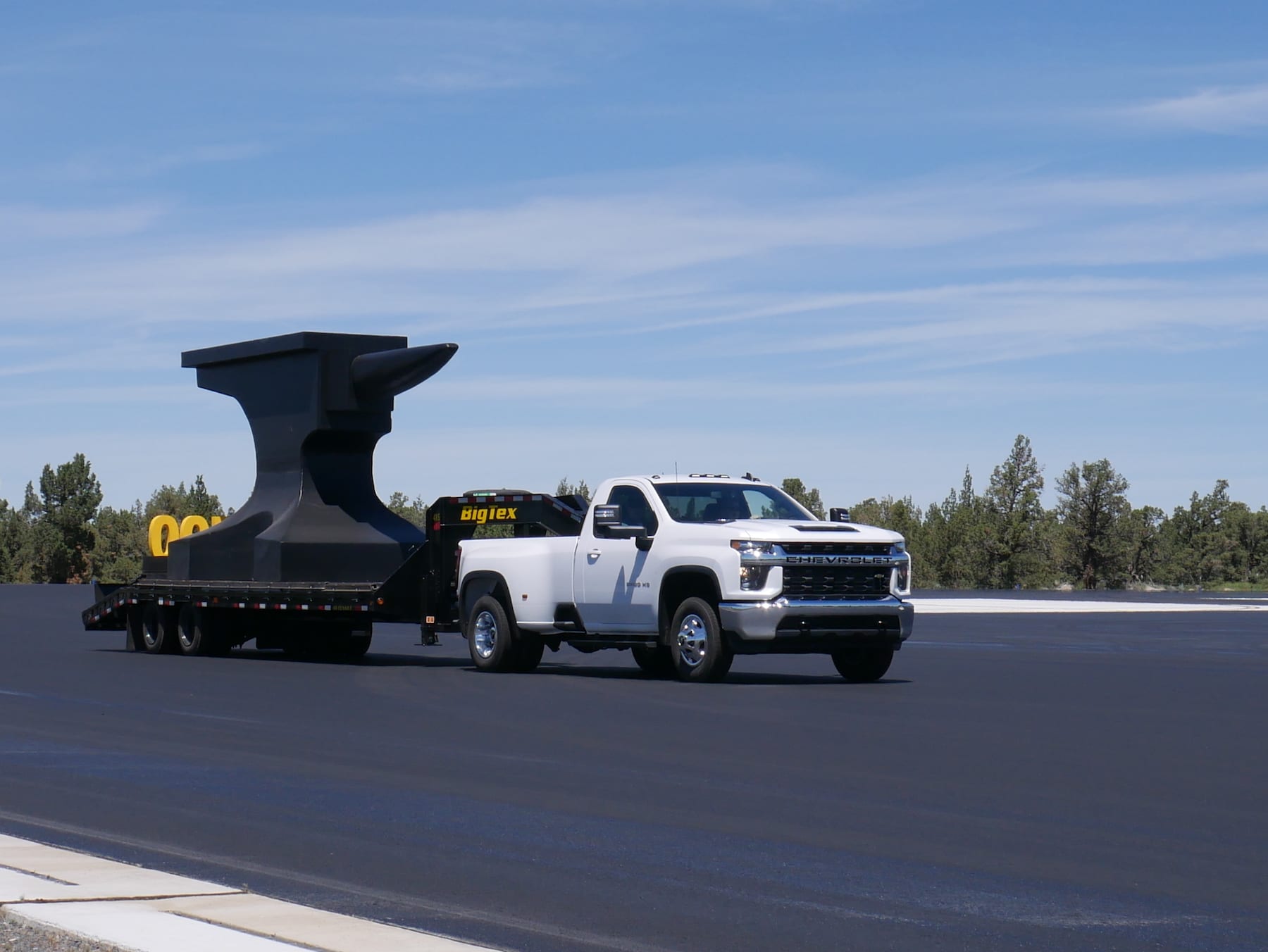 Now we get to the area of price. The Silverado 2500 HD comes in with a price of $35,695 (including destination of $1,595). That’s actually $300 less than the outgoing model. As you move up the trim level and add double cab or crew cab the price increases considerably. The top of the line model is the High Country with a crew cab and a standard bed. It costs $62,695. Add the long bed and you’ll tack on another $200.

Prices for 2020 Ford and Ram heavy-duty pickups have not been announced. The companies will likely up their game a little bit and this could have an influence on their price. When you compare the Chevy with the 2019 prices of these pickups you see it’s right in line with those models. In other words, Chevy definitely justifies the price of its machine by pricing it competitively.

The new Silverado HD is the best it has ever been by a long shot. While its competitors have it beat in a couple of areas, the truck also beats the competition in many areas. This makes choosing the true king of the heavy-duty market difficult.

If towing is your main concern, then the Silverado HD’s new technology and engines would have me leaning towards a truck with a bow tie on it. If you’re more worried about a luxurious interior or a heavy duty truck with a massive touchscreen or the absolute highest torque (we’re talking about the Ram) then you should look elsewhere.

Chevy has improved the Silverado in many ways that are going to matter to customers who need to get things done. That’s what heavy-duty trucks should be all about, which is saying a lot for the brand as a whole and should be just about all you need to know for the model itself.