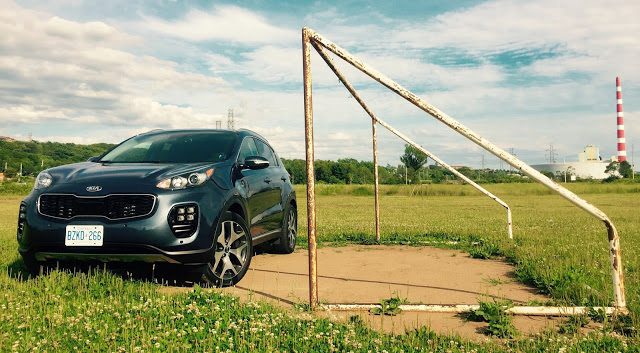 Everybody be buying small crossovers. All y’all. Todas las personas.

It’s a hot and highly competitive segment, and the four top sellers own half the category.

Theoretically then, making headway should be a real challenge. But a shockingly high percentage of buyers are getting in on the game, making the possibility of gaining sales – if not market share – a real possibility.

For a fourth time, then, there’s a new Kia Sportage, and we just finished testing a $41,420 example.

Any good? For that kind of money you’d sure hope so.

WHAT IS IT?
Kia began building the company’s first Sportages, Mazda-related models, in 1993. The second-generation model arrived a decade later and, though not a segment leader, represented a huge leap forward. The third Sportage from 2011-2016 was a stylish small crossover but felt cramped inside, had a flinty ride, and offered little rearward visibility.

The latest Sportage, Kia’s third Hyundai Tucson-related Sportage, was launched for the 2017 model year after a debut at 2015’s Frankfurt Auto Show. Kia Canada markets the 2017 Sportage in three trim levels – LX, EX, and SX – with all-wheel drive as a $2300 option on the LX, a $2000 option on the EX, and as standard kit on the SX. The SX, as tested here, is the only Sportage with the 2.0L turbocharged inline-four producing 237 horsepower and 260 lb-ft of torque, upgrades of 56 and 85, respectively, compared with the regular 2.4L four-cylinder.

The EX AWD Sportage can also be optioned up with a $2900 premium package (leather, panoramic sunroof, blind spot monitoring, heated steering wheel) or the $2900 premium package plus the $4300 tech package (Harman Kardon audio, navigation, cooled seats, power liftage). The SX Turbo, at $41,420, is then a $2400 leap beyond the EX Tech AWD.

HOW BIG IS IT?
Compared with Kia’s more popular crossover, the not-too-big-not-too-small Sorento, the 2017 Kia Sportage is 11 inches shorter bumper to bumper, slightly more than an inch narrower, and about an inch lower at the roof.

The Sorento provides 27% more space for stuff behind the second row; 22% more with the rear seats folded.

DOES IT WORK?
The fourth-generation Kia Sportage does many things well and few things poorly. The tech interface is as smooth and easy as in every other Hyundai and Kia. The high levels of equipment spoil drivers who, at this price point with a premium-badged SUV, wouldn’t be blessed with cooled seats and a big glass roof.

From every vantage point, the 2017 Sportage feels well built: the doors thunk, wind noise is kept to a minimum, levers and knobs and switches engage with purposeful heft, and the Sportage finally masks some pavement imperfections. There’s genuine family-car space inside. The 2.0L turbo, with 4000 pounds to propel, is a torque monster, making power across the rev range and really coming into its own when a slow-moving CR-V needs overtaking on a rural two-lane.

The Sportage nevertheless does not thoroughly distinguish itself as a class leader in any one specific area. Yes, there’s big power, but you could cover ground more swiftly in a Subaru Forester XT. Sure, it’s a hi-lux Kia, but at $41,420 – $4330 more than the most expensive CR-V – it surely should be. The Mazda CX-5 and Ford Escape handle more sweetly and are infused with greater agility. The Toyota RAV4 and Honda CR-V are distinctly more spacious and ride more sedately. The Sportage’s Hyundai Tucson platform-mate doesn’t approach strangers with a goofy face.

The Sportage is a fine all-rounder, but expectations are heightened when the price climbs above $40,000. The cartoonish looks, poor visibility, and lack of engaging dynamics are harder to swallow when the price approaches Audi Q5 territory.

Freed from thoughts of the elevated MSRP, I enjoyed the 2017 Sportage more and more as the week wore on. Given the degree to which I asked the engine to provide absurdly quick getaways, 10.8 L/100km was acceptable fuel economy. The 6-speed automatic, though never swift to act, is always smooth. The sense of solidity is pervasive. Viewed from directions other than the front, the Sportage is handsome and stands out in the same-same small SUV arena.

But this is a lot of money, and Kia needs to supply more than just big power outputs to justify the sticker price. Kia needs to inject the Sportage SX with better brake feel, a chassis keener to turn in, less body roll, and more direct steering that isn’t related only to greater weight. The 2017 Sportage’s on-road feel is surely acceptable at $30K, but I want more at $40K.

IS ANYONE BUYING IT?
Kia has certainly found a measure of success with the new Sportage that the brand did not enjoy a generation ago. Kia Canada reported more Sportage sales in the first seven months of 2016 than in all of 2014, for instance, and will surpass the 2015 total by the halfway mark of August. 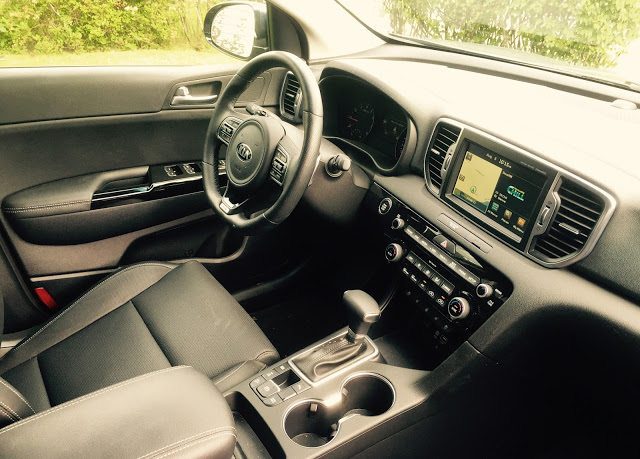 SHOULD I BUY SOMETHING ELSE INSTEAD?
There’s no shortage of candidates. Space is maximized in Canada’s current top-selling utility vehicle, the Toyota RAV4. The Honda CR-V is consistently North America’s favourite SUV/crossover for reasons related as much to ride quality and efficiency as to reputation.

Both of those top sellers lack outright power. V6 motivation in the Chevrolet Equinox/GMC Terrain twins won’t be married to the overall refinement of the Kia Sportage, and while the Jeep Cherokee has the straightforward control layout of the Sportage, its 9-speed automatic transmission is no friend.

The Ford Escape EcoBoost 2.0 is thus the prime alternative for the Kia Sportage SX Turbo. Similar power and superior dynamics are let down only by an interior that can feel cramped and the fact that all your neighbours already drive one. At Ford, however, you can have the Escape’s hi-po turbocharged engine without luxury-like equipment levels. With current Ford employee pricing discounts, the 2017 Ford Escape SE EcoBoost 2.0 AWD costs just $30,116.

HOW MUCH SHOULD I PAY?
If the turbocharged engine is what you want in the smallest Kia crossover, the only 2017 Sportage you can have is the fully-loaded, no-options $41,420 SX with all-wheel drive.

WHAT’S THE VERDICT?
The problem with the fourth-generation Kia Sportage SX is not with the Sportage itself, but rather the lofty price Kia demands for the full-bore SX Turbo and how that price rubs up against the better-in-every-way Kia Sorento. Kia Canada offers this very powerplant in the $35,135 Sorento LX, the very handsomely equipped $37,835 Sorento EX, and the $44,535 Sorento SX, which is equipped like this high-brow Sportage SX.

For a small price premium, the Sorento offers superior ride quality, no loss in real-world handling, a more attractive body, and a great deal of extra interior space.

While many Sportage competitors are not priced within reach of their larger brethren, Kia does the Sportage no favours by making the Sorento such a high-value proposition.

Fortunately, for the Kia crossover buyer who prefers the Sportage regardless of the price comparisons; the buyer who believes this is the Kia they want, Kia certainly can’t be accused of mailing it in. The fourth-generation 2017 Kia Sportage is a successful effort.

Just not successful enough to avoid being overshadowed.

Timothy Cain is the founder of GoodCarBadCar.net, which obsesses over the free and frequent publication of U.S. and Canadian auto sales figures. Follow on Twitter @goodcarbadcar and on Facebook. The Sportage was supplied by Kia Canada’s press office.