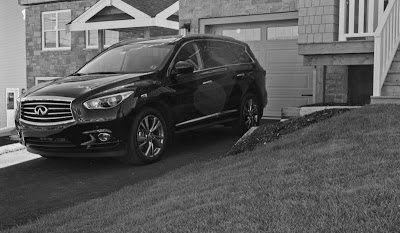 Since the Infiniti JX35 went on sale in Canada in April, the new three-row crossover has clearly outsold Infiniti Canada’s previous best seller. The JX’s 265-unit advantage over the G25 and G37 is pronounced given the size of the Canadian market. Infiniti sells an average of 683 vehicles per month here.

Indeed, the new JX has proven to be a hit for Infiniti, both in Canada and the United States. While not selling in the kinds of numbers Lexus puts up with the similarly-priced RX350, the 2013 JX35 is now a common sight in the suburban driveways of well-off families. 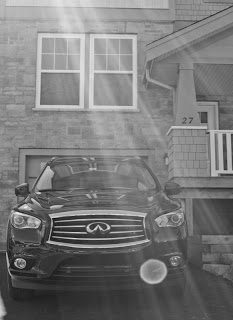 In the JX’s case, buyers fortunately don’t need to shell out more than they would on an upper tier mainstream brand crossover. Priced from $44,900, the entry-level JX35 costs $6060 less than a top-trim Chevrolet Traverse LTZ and $3620 less than a Honda Pilot Touring. Mercedes-Benz’s ML350 4Matic pricing starts at $58,900, a good bit more than the $56,000 JX35 I was loaned by O’Regan’s Infiniti in Halifax, Nova Scotia.

For families who can’t take a giant leap to the $73,200 QX56 or won’t sacrifice space in a $53,350 FX, an opportunity now presents itself in the form of the JX. The JX35 is relatively affordable, seats seven, and fits the desired image of those who seek an upwardly mobile lifestyle. A lifestyle which includes children. And sadly, even the friends of their children.

But does that mean you want to own it, or even lease it? After all, there are seemingly countless JX alternatives from both mainstream and premium auto brands. I wanted to find out just how well a 2013 Infiniti JX35 could handle the rigours of classy suburban family life. So I drove a JX out of the city a ways, past Bedford’s new four-pad hockey facility, and parked in my wife’s cousin’s driveway to explore the JX’s cabin.

Then I loaded my senior citizen parents inside for proper space analysis – my generation will soon be housing our parents, right? – and toured the Clayton Park area. If ever there was a challenge for a modern family car, surely it’s a drive through a provincial political riding that’s named after a 53-year-old developer of suburban housing developments.

From an excitement standpoint, this all-new Infiniti comes up short. It’s not available with Nissan’s more powerful 3.7L V6. So I’m driving a $56K Infiniti with a power-to-weight ratio that compares unfavourably with the Dodge Grand Caravan’s. Power is sufficient when accelerating from say, 50 km/h, but an extra 35 horses would be appreciated when pulling away from rest. Sadly, the JX doesn’t handle corners like the FX, but thankfully it doesn’t handle bumps and potholes and expansion joints like the FX, either. This trade-off is perfectly acceptable, particularly given the JX35’s ability to isolate. 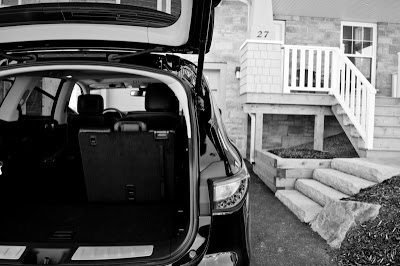 When Infiniti began making headway with the 2003 Infiniti G35, the main criticisms reviewers levelled at Infiniti was the lack of refinement and sub-par interior quality. A decade later, the story’s completely different. The leather in the JX35 is supple, the buttons and knobs match their surroundings, and pieces fit together seamlessly. However, stereo controls are set ridiculously low, steering wheel controls seem haphazardly situated, and tire thrum from the big 20-inchers is insistent.

The JX’s second row of seating requires knees to point skyward at a slightly uncomfortable angle, but space is plentiful. The third row isn’t awful – not bad at all for kids – but exiting is awkward. Because of the vast glass roof, rear-most passengers will at least enjoy abundant light. Space behind the third row is sufficient for a family’s grocery load and you’ll be pleasantly surprised to discover a small well beneath the floor. With the third row folded, the JX’s 40.8 cubic feet of cargo capacity is up 0.8 cubic feet on the two-row Lexus RX350 but down a bit from the Acura MDX’s 42.9 cubic feet. Furthermore, power-operating tailgates are awesome. 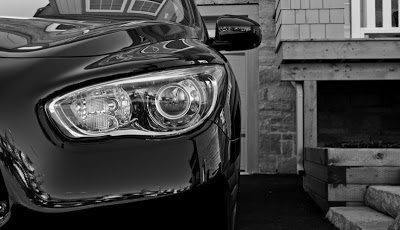 Up front, drivers should have no problem getting comfortable with 8-way power seats. Side bolstering is considerable but anybody slimmer than a mother of three who doesn’t adequately utilize a jogging stroller will find the bolstering too far spread.

Continuously variable transmissions are often controversial. The JX’s won’t be. Yes, you’d prefer Mercedes-Benz’s 7G-Tronic automatic, but the JX’s CVT doesn’t drone or whine or feel as though horsepower is being withheld.

Drivers will undoubtedly enjoy effortless steering at parking lot speeds, better than average brake feel, and an overall feeling of lightness that makes the JX35 drive through suburbia like a much smaller vehicle. A minivan this is not.

In fact, the balance Infiniti’s engineers struck between the dynamic qualities of the FX50 and Nissan Quest is admirable. 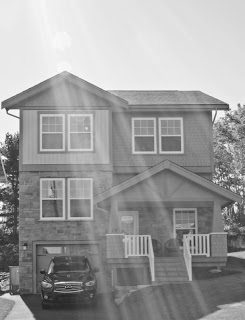 It’s that light steering, that manageable size, and the JX’s reasonable 18 mpg city fuel economy rating which makes this Infiniti an ideal suburban cruiser. Why you’d want to foul up the JX’s leather with hockey gear stench, I do not know. Choosing to allow the filth from the bottom of a child’s sneakers onto the JX’s carpet seems irresponsible. Taking a load of mulch home with two rows of seats folded, in this car, sounds delinquent.

But we do what we have to do. Just because our kids play minor hockey, just because they splash in mud puddles, and just because our spouses expects us to get some gardening done doesn’t mean we can’t enjoy the transportation part of our lives. Yeah, we do what we have to do, but hopefully we can drive what we want to drive. Overall, the JX looks nice, carries big loads, keeps seven humans safe, and maneuvers with ease.

From a premium brand perspective, no three-row crossover can touch the JX on price. Admittedly, a BMW X5 xDrive35i fosters a greater aura of desirability, but it costs at least $17,000 more. Without some hidden major failing we’re not aware of, one wonders why the 2013 Infiniti JX35 doesn’t itself cost a bit more.