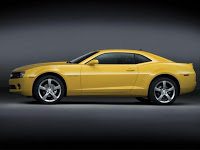 Over at Car and Driver, Michael Austin had the opportunity to drive the V6 version of the brand spankin’ new Chevrolet Camaro. The V6 isn’t the poor boy’s pony car anymore, remember. With about 300 horsepower and six speeds in both its automatic and manual transmission, the new base Camaro is the real deal. Here’s some of what C/D had to say about the Camaro’s driving dynamics.

“… the Camaro showed remarkable poise, with the suspension handling the pockmarked roads with hardly any disturbance to the cabin. The chassis is less jumpy than that of the Mustang but far more communicative than in the Challenger, and although the Camaro is nearly as wide as the Dodge it doesn’t feel as big….

the 18-inch tires are preferable, offering more steering feel and more predictable handling. On either set of tires, though, the Camaro turns in easily before setting into minor understeer that is easily cured with a stomp on the throttle. The engine responds willingly….”