Having just stepped out of a Ford Excursion, I had an eery feeling. A been-there-before-deja-vu-all-over-again moment. Something was familiar, and it wasn’t just the Excursion. No, I went back in time about a month. Ah yes, I’ve got it. I basically drove the Hummer H2 today, except without the nice and cozy interior.

Read about the Excursion and GoodCarBadCar relationship here

Oh, I sound so positive. I don’t mean to. The Excursion is a must-have. It tows a massive trailer and hauls up to nine fishermen. The Hummer? Nice and cozy interior? “Excuse me Good Car Guy – you sound off your rocker”, say you. Well, the H2 does indeed feature one of the most stylish and rugged interiors amongst the cars I drove at General Motors Milford Proving Grounds in September. Too bad I couldn’t see what was going on outside due to the gun-slit windows. I understand that’s part of the design. After all, the H2 is basically a Tahoe/Yukon/Suburban-based replica of the military original. (Keep in mind, the H1 remains available on special order.) 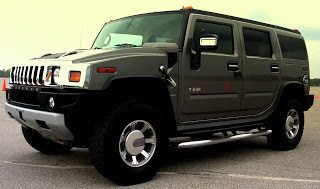 Which begs the question: why do customers wish to appear as though they’re driving through the streets of Baghdad? Albeit, the roads Hummer H2’s are typically driven on are far smoother than what you might find in the disaster zone of Iraq. By my unofficial count, most H2’s are riding on 22″ chrome wheels sprayed with some rubber. These things aren’t going off-road. They just look like they’re going off-Iraq. And that’s not cool.

Which begs the question (actually, it begs other different questions, but I thought I’d continue the theme): if it’s not off-roading, what’s the use? I don’t know. Seat a few of your friends uncomfortably, don’t take their luggage, and ask for gas money before you take the weekend trip. You’ll pay $90 bucks to fill the H2 in Brooklyn today, up to $111 in LA, and about $115 in Toronto.

And you’ll do so often. The H2 weighs 6400 pounds, way above the maximum curb weight where official fuel economy figures are mandated. Outside sources average between 9-11 mpg, indicating that the H2 requires a fill-up every 350 miles – if you’re lucky and if you stretch it.

GoodCarBadCar won’t be complimentary. Earth has moved on. We use CFL’s in our lamps and walk to the convenience store if we can and expect a large vehicle to accomplish something for us if it’s going to abuse our wallets. The H2 accomplishes little; next to nothing. Even in the driver’s seat I felt cramped, not cozy. Certainly not cuddly. Five miles around GM’s own proving grounds was regrettable, to say the least. I wish I’d simply steered the H2 around the Black Lake and given myself time to drive the H3. I didn’t. I’m sorry. For myself.

Hummer’s first ‘mainstream’ vehicle starts a chunk over $50,000 in the USA and gives you plenty of power and torque. Plenty, that is, if the engine is in a vehicle weighing less than 5000 pounds. 365 lb-ft of torque is useful. The H2 does, after all, pull away from the line cleanly and smoothly and provides a distant rumble. Suiting.

The H1 Alpha uses an even torquier 6.6L diesel. I could suggest to GM that this diesel be installed in the H2, but for what reason? Limited fuel savings, not even enough to compensate for the extra cost? A nicer feeling in the environmental section of my brain when I drive the obese brute? That feeling wouldn’t last long.

The H2 is cumbersome. It is one of only a few vehicles I’ve ever driven that made me wish I wasn’t driving. I’ve often felt like I shouldn’t drive because of fatigue or sickness. But the H2 and Tahoe Hybrid made me wish someone; something, would take over. Just robotize the thing. The driver is totally disconnected from the process anyway.

There is good news. The Hummer has more cargo capacity than the GCBC-crowned Hyundai Santa Fe, 8.4 cubic feet extra in fact. True, the H2 is 19.5 inches longer, 11.3 inches taller, and 6.8 inches wider on a wheelbase 16 inches longer. Who cares? More space than a GoodCarBadCar Top 5 winner – Hummer’ll take that anyday.