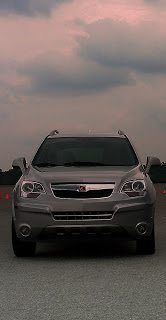 GM’s invitation to drive a variety of vehicles at their own proving grounds in Milford was not something I would normally turn down. So I didn’t. Buick’s Enclave, the Cadillac CTS, Pontiac Torrent GXP, Saturn Sky Red Line, and Chevrolet Tahoe Hybrid have already been reviewed here at GoodCarBadCar. Now it’s turn for a second Saturn in Part II of Milford’s SUV quartet.

Read all of The Good Car Guy’s Milford posts here

SATURN VUE: The new Vue looks good. In fact, Saturn’s new Vue feels good. Better yet, the new Saturn Vue is good. But I wish it were better.

Ironically, a vehicle I mocked here on GoodCarBadCar was the very vehicle I drove first around the proving grounds: Pontiac’s Torrent GXP. The existence of the GXP doesn’t draw me to the Pontiact brand, and the overall feel of the Torrent didn’t draw me any nearer. However, giving a Torrent GXP it’s head around five miles of GM’s own tarmac proved that a small, relatively inexpensive, American SUV can really cut the mustard. Check out the GCBC Torrent Driven here .

Why do I mention the GXP’s dynamics, especially in such a praiseworthy tone? Becuase the Vue, a vehicle competing in the very same sector at a similar price point, is so good in so many arenas but fails so miserably in one. That’d be driving dynamics.

4-3-2-5. P-o-u-n-d-s. Man, it hurts just to type that. Especially considering the fact that a Torrent GXP hits the scales as a comparative lightweight; a few hundred pounds less.

Build your own version of the Vue at Saturn.com

There is one major factor hindering me from recommending a Vue to you: the weight of the Vue, a vehicle with less length, height, and wheelbase than the Torrent, creates a driving experience that feels more Saturn Outlookish than Saturn Auraish. And if you’re in the market for a high-priced cute ute, don’t you want a carlike experience? The segment, almost automatically; almost by definition, suggests that car-like is what you get.

if on rails (no, really..kinda…sorta), the Vue felt as if on butter. On a straight stretch where the GXP felt strong, the Vue felt breathless. When steering needed sharpness, the Vue gave me, umm…. dullness.

I was excited about the Vue, a similar feeling to what I felt as I approached the Buick Enclave. In both instances the excitement felt wrong, but was exhibited because of two things: the old Vue and the Buick Rendezvous, both banished. Thankfully.

The Enclave proved itself to be worth an increased heart rate. No, not because the driving experience was so exhilarating, but because Buick built a true, desirable Buick. With the Vue, my satisfaction with the interior quality and space as well as the refinement and maturity of the vehicle went downhill as soon as I had to drive the thing.

Give me a Saturn Vue. Yes, please do. But only if it drives like that Pontiac Torrent GXP. I never thought I’d want either one, and I still don’t. I just wish I could have the best of both world’s.