We don’t expect SUVs and crossovers to fit into two narrow size categories and approach the market with identical attitudes. We want different vehicles; Mazda CX-9s and Chevrolet Suburbans and Jeep Wranglers and Porsche Macans and Subaru Foresters.

Yet for some reason, there’s an expectation that pickup trucks need to fit inside a very specific mold. Take the stencil off the shelf. Adhere to the rules and regulations set forth in Houghton’s Book Of Pickup Politeness, circa 1883. Do not deviate from the preordained path.

As a result, there are essentially three pickup truck size classes north of the Rio Grande: midsize, full-size, and the slightly larger heavy duty. Competitors are directly comparable in size and largely the same in terms of horsepower and capability. Thinking outside the box involves – wait for this novel concept – the addition of a diesel engine.

A diesel? In a pickup truck? Gasp. Palm over mouth.

That’s not to say pickup trucks haven’t rapidly advanced. In fact, pickup trucks are arguably improving at a faster rate than the traditional car sector, making great leaps forward in terms of power, efficiency, and refinement.

But the pickups trucks of today are still, to state the obvious, pickup trucks.

Except for this one. The 2017 Honda Ridgeline can tow (somewhat) and haul (quite a bit) and ferry five individuals (quite comfortably) and bound through the mud (there’s even a mud mode). There’s a cabin with four doors and a sufficiently lengthy bed. So it’s a pickup truck.

But the new, second-generation Honda Ridgeline is entirely unlike the ten other pickup truck nameplates on the market.

WHAT IS IT?
Unlike every other pickup truck on the market in Canada and the United States in 2005, the first Honda Ridgeline did not arrive with a body placed on a separate frame – known as body-on-frame construction – but rather as a unibody; essentially a rugged, pickup version of the Honda Pilot and Odyssey.

The first Ridgeline wasn’t a sales flop, at least not at first. Both in Canada and the U.S., Ridgeline sales peaked during the truck’s first year on the market and then began to plunge. North of the border, sales plunged by two-thirds between 2006 and 2011. After selling more than 50,000 Ridgelines in the U.S. in 2006, Honda sold only 45,000 during a three-year span between 2012 and 2014.

Fast forward to the launch of the 2017 Honda Ridgeline and all other pickups on the market are still body-on-frame trucks. The all-new second-generation Honda Ridgeline? Once again, it’s a unibody pickup, limiting its towing capacity and payload – to a degree – but completely benefiting its packaging as well as its ride and handling characteristics.

HOW BIG IS IT?
Compared with the full-size truck you likely know best, the Ford F-150 SuperCrew 4×4 with the shorter of two available bed lengths, the Honda Ridgeline is 22 inches shorter from bumper to bumper, slightly more than an inch narrower, and roughly five inches lower at the roof. The F-150 Supercrew offers 20% more passenger volume (including an available three-person bench across the front) and a bed that’s two inches longer, half an inch wider, and a bed that’s nearly five inches deeper.

More comparable in size is the Toyota Tacoma DoubleCab. With the shorter of two available beds, the Tacoma is two inches longer but four inches narrower and equally tall. That bed is nearly four inches shorter and a difference-making 8.5 inches narrower.

Closely related to the Ridgeline is the Honda Pilot: 15.5 inches shorter than the Ridgeline, an inch lower, and identically wide. 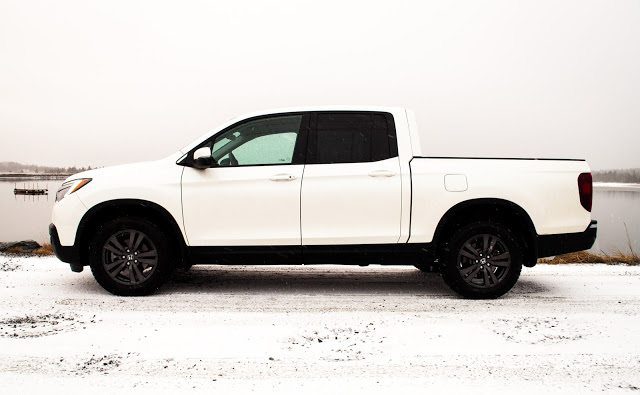 DOES IT WORK?
In the ways in which the 2017 Ridgeline works, it works very well, indeed.

But it’s not perfect.

On the positive side of the ledger, the new Ridgeline rides, handles, steers, accelerates, and brakes exceptionally well. Free from the constraints placed on a vehicle that requires extreme pickup truck capabilities – the Ridgeline is lower and has worse approach, departure, and breakover angles than a Toyota Tacoma, for instance, and can tow only 5000 pounds – Honda’s truck is free to inherit the benefits of car-like construction and a road-centric suspension setup. Not only does the Ridgeline tackle rough roads better than any other pickup, it rides better than most vehicles, full stop. Thank the long wheelbase.

Steering is quick, without the large dead spot at the straightahead owned by most trucks. Tossed into corners on our favourite twisty roads, the Ridgeline feels far more like a compact, 3500-pound crossover than a 4500-pound pickup. 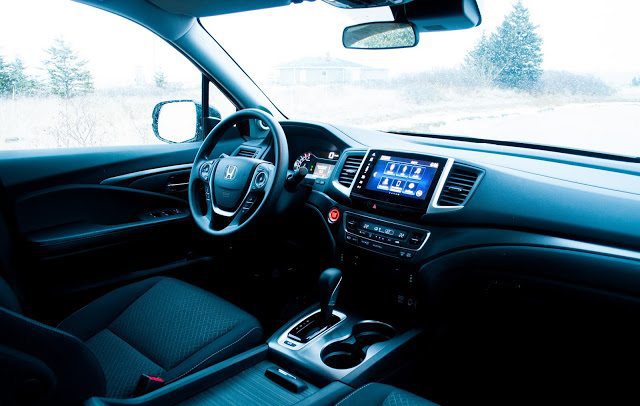 The 280-horsepower V6 is eager to rev and turns the Ridgeline into a quicker truck than its midsize rivals. We also saw decent fuel economy of 11.9 L/100km. That’s not enough to save you much money compared with an F-150 2.7L EcoBoost, but given the winter tires, four occupants, city driving, and sub-zero temperatures in which our test was conducted, the results were impressive.

The Ridgeline Sport’s roomy rear seat, vast in-bed trunk, broad bed, and slate of standard safety gear certainly alter the value equation. This unique blend of flexibility makes comparisons with conventional trucks difficult. Other midsize trucks don’t offer such a wide bed. No other truck offers a trunk. Other midsize trucks don’t offer such rear seat comfort; the full-size trucks that do so are far more challenging to park downtown.

Some of the Ridgeline’s perks nevertheless come at a cost.

‘;
document.getElementById(“vinads_div”).innerHTML = lfAd;
}
});
That large rear seat is awkward to access through a slim rear door aperture, for instance, and it becomes downright annoying when loading an infant seat or unloading a lanky toddler.

Installing their seats won’t be easy, either, since Honda requires you to loop the tether around a thick bar at the top of the seat and then slide the tether back down beside and underneath the outboard seats (or between the anchors in the middle row.) The anchors aren’t easy to access, either.

In the front row, drivers conduct operations through an infotainment unit that Honda’s already rejected. The new CR-V uses a proper volume knob; the new Odyssey’s touchscreen system is entirely different. The Ridgeline’s system, on the other hand, is one smooth, slow, sad surface.

Out back, the Ridgeline’s in-bed trunk is brilliant, deep, and drainable. But beware, smaller adults won’t be able to reach what’s inside unless the dual-action tailgate (which isn’t damped) opens to the side. You can’t do that just anywhere. 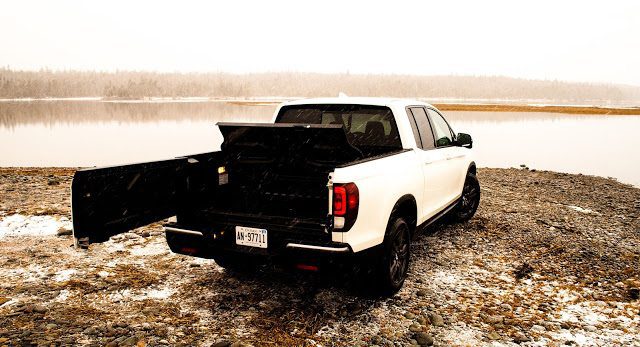 IS ANYONE BUYING IT?
Yes, and no.

Compared to other pickup trucks, the Honda Ridgeline is decidedly uncommon. December was the best month yet for the second-generation Ridgeline in the United States. Yet at 4085 sales, only 10% of midsize pickup buyers and 1.5% of all pickup buyers opted for a Honda.

Back in Canada, Ridgeline sales reached a six-year high despite only being available since mid-summer. But August, the new truck’s first full month of availability, was its best yet, and Q4 monthly volume was down 29% from that summer peak. Ridgeline capacity is constrained somewhat, so Honda is moving all Acura MDX production from the Alabama plant it shares with the Ridgeline, Pilot, and Odyssey to Ohio. This is likely to provoke greater Pilot sales, however, rather than a huge Ridgeline uptick. 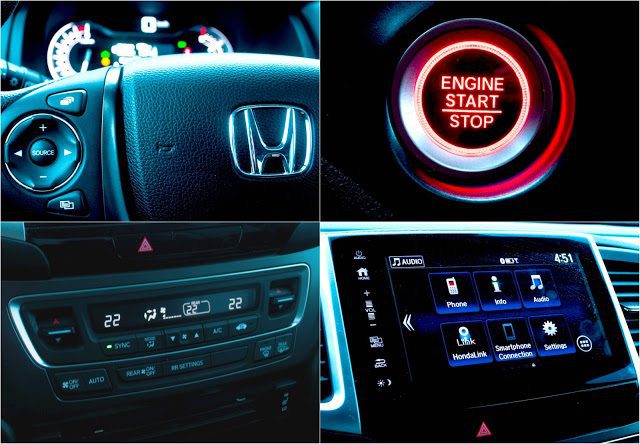 SHOULD I BUY SOMETHING ELSE INSTEAD?
If you really, truly, deeply want to buy a Honda Ridgeline for everything the Honda Ridgeline stands for, it’s possible that nothing else will fit the bill.

But there’s no shortage of exceptional, desirable machinery in the modern pickup truck world. We feel strongly about the Ford F-150 SuperCrew and its affable 2.7L EcoBoost V6. The Toyota Tacoma holds its value like nothing else and remains true to truckiness. There are also diesel-powered versions of the Chevrolet Colorado and GMC Canyon available for the fuel-conscious midsize truck buyer.

Keep in mind, there are reasons beyond size and capability and capacity that cause many thousands of Canadians to purchase or lease a full-size truck each month. Even with limited advertised January discounts, the 2017 Ford F-150 XLT SuperCrew 4×4 is currently discounted to $42,299, a very Ridgelineesque price. And it’s often much less costly.

HOW MUCH SHOULD I PAY?
The $41,415 Honda Ridgeline Sport is a very handsomely equipped vehicle.

If you want leather, or even a leather-wrapped steering wheel, you’ll need to step up to the $44,415 Ridgeline EX-L.

Besides providing its driver endless joy on a twisty road in July, a Mazda MX-5 can’t really do much else. Sure, you can take a small load of groceries, and if your passenger is small enough, he or she can squeeze in, too.

A garbage truck, meanwhile, is not suited to providing any fun in the sun, particularly on a twisty road in July. Sure, you could load items other than garbage, but you best be careful not to squeeze such items with the compactor. 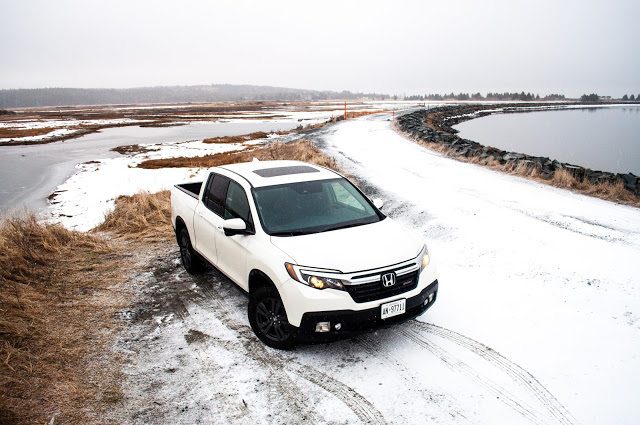 You see where we’re going with this. The second-generation Honda Ridgeline is one 17.5-foot-long compromise. It’s not designed to be enormously useful in any one specific area.

Towing capacity is limited compared with other trucks. But the Ridgeline can tow 5000 pounds, which is more than most crossovers.

The rear doors don’t open nearly wide enough for this to be a true family car. But the cabin is expansive and comfortable.

There’s no available V8 engine; no turbocharged V6, either. But the 280-horsepower Ridgeline shuffles power through the six-speed automatic swiftly, so the Ridgeline is nevertheless quick regardless of rpm and returns tolerable fuel consumption.

The Ridgeline doesn’t offer an optional extra-long bed – 64 inches is the max. But the Ridgeline is only 210 inches long, overall, and can be parked much more easily than an F-150 with a similarly sized bed.

The Ridgeline is never going to be all that capable off-road, but the benefit of its trucky limitations are obvious on a twisty road, where the Ridgeline is the best-handling and best-riding pickup truck available.

For the truck buyer who absolutely requires truck-like capability, for the family car buyer who needs the ingress of a minivan, for the RV tower or the backwoods lumberjack or the trailrunner, the Ridgeline was not specifically designed for your needs.

But for everybody else?

Timothy Cain is the founder of GoodCarBadCar.net, which obsesses over the free and frequent publication of U.S. and Canadian auto sales figures. Follow on Twitter @goodcarbadcar and on Facebook. The Ridgeline was supplied by Honda Canada’s press office.