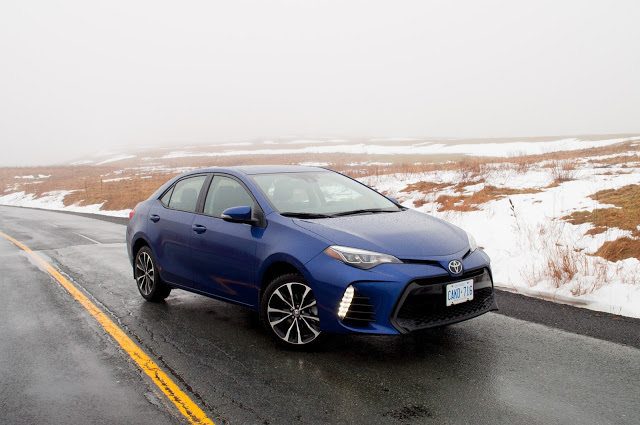 The third-generation Toyota Corolla won’t go down in history as one of my favourite cars, but it’s a delicate beauty. More importantly, this particular car was a gift given to me by a good friend, an ESL student from Japan who was boarding at my parents’ about a decade ago. He’d emailed his mother and asked if she could send over something small and uniquely Japanese for a rabid automotive enthusiast.
She shopped well.

The eleventh-generation Toyota Corolla that launched for the 2014 model year – and now entering 2017 while celebrating the Corolla’s 50th anniversary year – is not seen here in right-hand-drive, two-door, BRG, round-lit, Japan-built guise.

Of course, we can’t expect a new compact car to hold the allure of a mid-70s stalwart. Charm and charisma? Hardly. New cars are designed to be robust and reliable, secure and safe, efficient and economical.

And that’s the way Corolla buyers like’em. Few things in life are as certain as Corolla predictability.

And, alas, predictably miserable to drive.

WHAT IS IT?
2017 marks the 50th anniversary of the venerable Corolla nameplate, the all-time best-selling vehicle nameplate in the world. 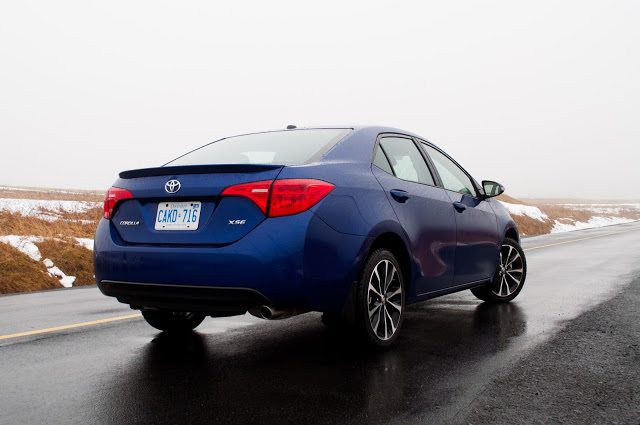 Production of the sixth-generation Corolla began in Canada in 1988. The current Corolla, refreshed for 2017, is assembled in Cambridge, Ontario.

The Corolla sedan is marketed in Canada across three trim levels – CE, SE, and LE – but with various trim levels filling all the gaps. A manual transmission is available on the base Corolla and the least costly SE. This XSE is essentially a Corolla SE, supposedly the sporty Corolla, with the added equipment from Toyota’s most luxurious Corolla, known in the U.S. as the XLE but in Canada as the LE with an Upgrade Package.

HOW BIG IS IT?
Compared with Canada’s best-selling car, the Honda Civic sedan, the 2017 Toyota Corolla is nearly an inch longer, an inch narrower, and nearly two inches taller. The Corolla’s cabin is 2% larger, according to the official specs, though rear occupants will think the difference is greater.

Set to be replaced in the coming months by an already-revealed model, the Corolla’s Camry big brother, is nearly eight inches longer than the Corolla, nearly two inches wider, and half an inch taller with 4% more space for passengers and 18% more cargo volume.

DOES IT WORK?
As transportation: yes.

Yet inside, it’s a cavern. Slotting in front-facing and rear-facing child seats were a breeze. Legroom is expansive, aided by an almost perfectly flat floor. With a big, squared off trunk hanging off the back, this is one of a few compact cars that can easily be used by young families. Add the Corolla’s safety credentials, low price of entry, real-world fuel economy, and likelihood of longevity to the mix and you’d almost certainly have a winner. 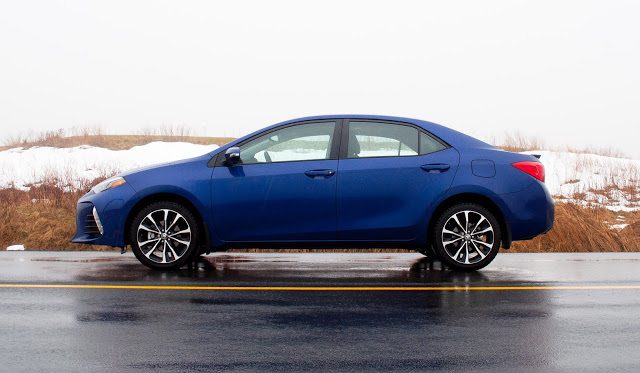 On-road behaviour may not be front of mind for the majority of Corolla buyers. Okay, it’s definitely not. But just because we don’t all require Miata-like reflexes or Golf GTI-like sharpness or AMG-like acceleration – and just because many of us do require low MSRPs – doesn’t mean we have to accept this level of dynamic incompetence.

Acceleration, at least with the easily-tolerated continuously variable transmission that most Corolla buyers choose, is tepid. Car & Driver testing suggests nought to highway speed requires 10.5 seconds. Acceptable in a Prius, that’s far off the pace of the segment in which the Corolla competes.

Grip, particularly when clad with this car’s Bridgestone Blizzaks (as cars in this region typically are for nearly half the year), gave up quickly and easily and unhappily. The Corolla doesn’t want to be tossed around corners as though it’s a Mazda 3, and as the week wore on, I certainly lost my desire to do the tossing.

Positive steering feedback isn’t an easy characteristic to find in modern cars, but the Corolla goes so far in the opposite direction thanks to its total lack of communication and laggardly responses. The rack is much slower than that of the Toyota Corolla iM, not exactly a paragon of modern electric-assist steering.

And while the Corolla does not make its way down a poorly paved road in a flustered fashion – the ride quality is not busy – the Corolla still greatly suffers from particularly sharp impacts.

With interior material quality a letdown and a general lack of cabin cohesion marrying a dynamic ineptitude not seen in great swaths of the Toyota lineup, the 2017 Toyota Corolla XSE does not come across as a great car.

But it’s big inside. And in cold temperatures while wearing winter tires in mostly city driving, we averaged a miserly 7.3 L/100km. And it’s likely invincible.

‘;
document.getElementById(“vinads_div”).innerHTML = lfAd;
}
});
IS ANYONE BUYING IT?
7% of the new cars sold in Canada in 2016 were Corolla sedans. Yes, thousands of Canadians are buying and leasing Corollas every month; 3732 per month on average.

South of the border, the Corolla family is America’s second-best-selling new car. Only the Toyota Camry sells more often.

SHOULD I BUY SOMETHING ELSE INSTEAD?
At $26,900, there’s no shortage of options, as the Corolla XSE not only competes with higher-performing versions of competing compact cars but also significantly more refined midsize cars. With HondaSensing, the Honda Accord LX is priced at $28,445, for instance.

More directly, two jumps up from Subaru’s basic model, the all-new 2017 Subaru Impreza Sport with a CVT costs $27,390 and provides all-wheel drive as standard equipment. Like the Corolla, the Honda Civic holds its value extremely well. All-new for 2016, the Civic is a far more engaging car to drive and provides a far superior cabin and costs $25,450 in Civic EX HondaSensing trim. We also advise consideration of a 2017 Mazda 3 GS (with the optional sunroof package and an automatic) for $24,595 and the 2017 Hyundai Elantra SE at $25,794.

HOW MUCH SHOULD I PAY?
Hugely spacious and filled with safety gear that, at the very least, is optional on most competitors, the $17,980 Toyota Corolla is a stand-out value.

But the Corolla XSE we’re driving is 50% more costly than Toyota Canada’s basic Corolla, a car equipped with the same underwhelming engine and generally lackluster interior. The Corolla’s value game is progressively washed away as the price approaches and then enters Camry territory.

At $23,695, the Corolla SE with a six-speed manual transmission and an upgrade package (rear disc brakes, sunroof, heated steering wheel, 17-inch wheels) is a somewhat more enticing compact car. The $21,280 Corolla CE with the continuously variable transmission is perhaps the most Corollaish of all Corollas. 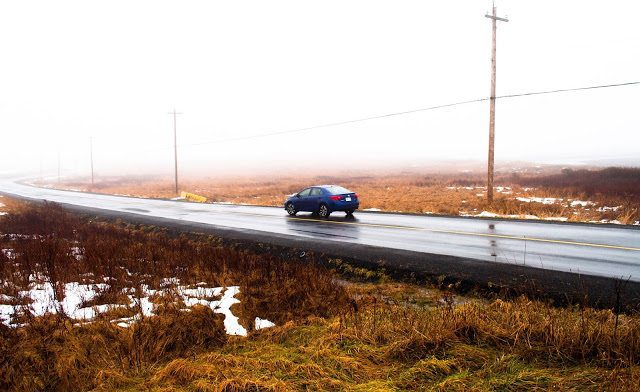 WHAT’S THE VERDICT?
Few cars present such a dichotomy. Perceived by some to be the best car in the world, the Corolla will by others be deemed to be the worst.

Is reliable, spacious, economical transportation the perfect definition of car? Or are cars meant to be driven; are they supposed to interact, converse, and connect? Is transportation an aspect of your day you must overcome, or is your car the very part of your day that helps you overcome?

A famed trio of British television presenters were known to point out that true car enthusiasts must, at some point in time, own an Alfa Romeo. The head of University of California San Diego’s Contextual Robotics Institute, Henrik Christensen, says, “Kids born today will never get to drive a car.”

In the middle of those two poles, you’ll find the 2017 Toyota Corolla XSE.

Timothy Cain is the founder of GoodCarBadCar.net, which obsesses over the free and frequent publication of U.S. and Canadian auto sales figures. Follow on Twitter @goodcarbadcar and on Facebook. The Corolla was supplied by Toyota Canada’s press office.