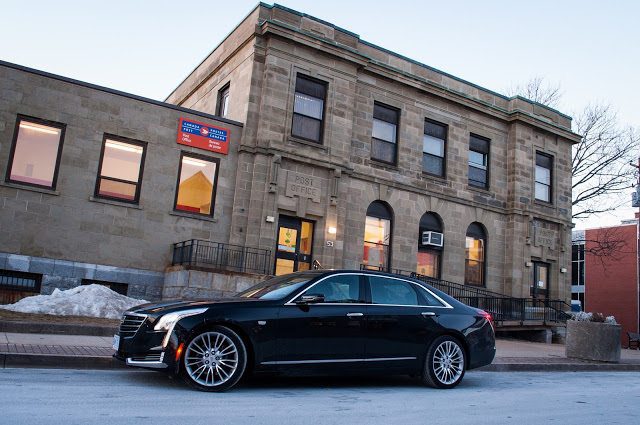 These are the kinds of terms used in the past, sometimes endearingly, to describe the handling of large Cadillacs.

For a time, it didn’t matter whether the terms were spoken endearingly or in anger. Cadillac was the standard of the world. Cadillac buyers didn’t want the steering feel of a Lotus Elan or the delicacy of an MG Midget.

But then Cadillac rested on its laurels. While Cadillac was still fighting Lincoln, European luxury gradually ate into the Detroit luxury brands’ North American territory.

Then along came Lexus, a Japanese brand which added peerless reliability to a blend of technology and refinement unlike anything anyone had ever seen before.

Cadillac was caught flat-footed. Sales in its home market were nearly cut in half between 1986 and 1996. Then, after a decent resurgence in the early part of this century, sales plunged by a quarter between 2005 and 2015.

Cadillac wasn’t playing its old game, nor was Cadillac good enough to play the game that the imports were dominating. Kept afloat by successful SUVs and crossovers, Cadillac’s car portfolio was steadily improving but was nevertheless perceived by luxury car buyers as an afterthought.

Yet Cadillac persists. As a result, augmenting the largely ignored ATS, CTS, ELR, and XTS is this flagship, the 2017 Cadillac CT6. It’s not a replacement for all those front-wheel-drive wreath and crest airport limos of the past (or present.) It’s not intended to evolve into your great aunt Ethel’s future hearse. It’s a big, traditional, American luxury car.

Or perhaps, not so traditional. Barge-like? Yacht-like? Winnebagoesque? Not exactly. The new Cadillac CT6 3.0 Twin Turbo has much of the visual presence of a traditional Cadillac flagship: long, low, wide, and extravagant. But its on-road behaviour is something altogether different.

WHAT IS IT?
Similar though their names may be, this is not a replacement for the Cadillac CTS, a smaller sedan that more directly tackles the Mercedes-Benz E-Class, BMW 5-Series, and Audi A6. The CT6 does, however, tread some middle ground, with pricing that resembles those German midsize cars and dimensions that resemble their bigger brethren: S-Class, 7-Series, A8. 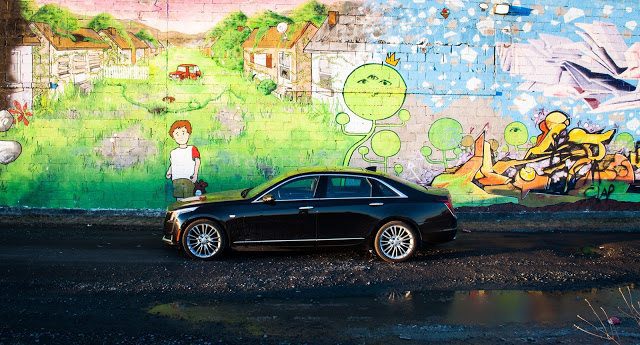 In rear-wheel-drive form, the 2017 Cadillac CT6 is offered with a 265-horsepower 2.0L turbocharged four-cylinder in base and Luxury trim levels. All-wheel-drive CT6s, starting at $66,240, come standard with the 335-horsepower 3.6L V6 in base, Luxury, Premium Luxury, and Platinum iterations, with the Platinum reaching $97,290 before options.

HOW BIG IS IT?
Cars come bigger, but not by much.

Nearly nine inches longer, two inches wider, and an inch taller than the Cadillac CTS, the 2017 Cadillac CT6 makes extensive use of aluminum to keep its weight in check. Compared with the CTS V Sport we tested in 2014, this CT6 is only 181 pounds heavier.

The Mercedes-Benz S550 4Matic, the standard among full-size luxury cars, is marginally longer, wider, and taller than the CT6. It also weighs 15% more.

DOES IT WORK?
Prepared though this and other reviews may make you, you’ll still be surprised at just how well the 204-inch-long Cadillac CT6 takes a corner. It’s not just the lack of body roll and grip, it’s the degree to which the car won’t become unsettled mid-corner and the ease with which a swift change of direction is met with instant response. The steering isn’t nearly as lively as the CTS’s, but there’s generally little sense of extra girth in this bigger sedan.

Take note, however, that all CT6’s won’t handle the same way. This car’s 20-inch wheels and low-profile tires are part of it, but the Active Chassis Package also includes rear steering, which improves agility. The rear wheels turn in the same direction as the fronts at higher speeds, albeit only mildly, instead of turning the opposite direction as they do at slower speeds when the goal is to decrease the turning radius.

Magnetic ride control is part of the same package, but it doesn’t make the CT6 a decidedly relaxed rough road companion. (On the Atlantic coast of Nova Scotia, all the roads are rough.) Just pliant enough in Tour mode, the Cadillac CT6’s rear end simply rides too stiffly for a car of this type in Sport mode.

The payoff, of course, is the exceptionally responsive handling. Sport mode also gives provides sharper throttle response and better weighting for the steering. Cadillac needs to permit these functions to be selected independently, so the shocks could remain in Tour’s more relaxed setting while other systems remain in Sport.

With or without Sport mode’s greater responsiveness, the 3.0L twin-turbo V6 is a beast. Lag is nonexistent, torque is abundant all across the rev range, and what sound makes its way into the quiet cabin is the kind that cause you to keep the throttle pinned.

It’d be helpful if the V6 wasn’t mated to this eight-speed automatic. Perfectly acceptable when the CT6 is being hustled, lighter throttle applications and slower speeds often send the CT6’s transmission into a fit of confusion, ending in a harsh shift. Also lacking refinement is an stop-start system that is dreadfully conspicuous.

The CT6’s cabin isn’t faultless either. While the rear quarters are by no means in want of space, the CT6’s centre rear tunnel is massive. Further abaft, the trunk has a slim opening, and an odd trunk shape limits space to 433 litres, less cargo volume than you’d get in a Camry. 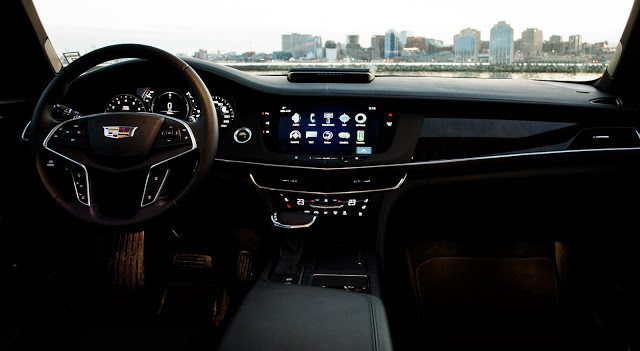 Those interior traits are obvious before you’ve left the dealer lot on a test drive. Less predictable is the inconsistent functionality that became a hallmark of our week with the $87,115 CT6. The mode button that selects Tour, Sport, and Snow modes responded, at best, a quarter of the time. Bluetooth was unresponsive. Regardless of driveway angle, the driver’s door never wanted to stay open, no matter the position. The Cadillac User Experience touchpad appears to be an afterthought for an automaker that’s struggled to earn CUE toushcreen plaudits – just use a proper knob/wheel like the Germans. Many of the capacitive touch buttons remain difficult to use, with a Home button that rarely wanted to take the screen home. Even in the gauge cluster, tasks were sometimes completed lethargically.

At a lower price point, these faults might be overlooked. At another brand, where resale value and long-term reputations counter quality woes, these faults might be overlooked. But if these issues crept up on a test drive with a Cadillac sales representative within minutes of leaving a showroom that doesn’t quite offer the upmarket experience of a BMW store, the CT6’s exceptional driving manners won’t effectively counteract the idiosyncrasies.

IS ANYONE BUYING IT?
In Canada, not really. The first CT6s were imported from Michigan in April. Only 250 have been sold since.

For every CT6 sold in Canada, the nine-times-larger U.S. market has taken possession of 37.

Mercedes-Benz Canada sells nearly 90 copies of the much more costly S-Class every month.

SHOULD I BUY SOMETHING ELSE INSTEAD?
Let’s assume you want a big sedan but don’t want to pay more than $100,000, a psychological breaking point. This rules out the Mercedes-Benz S-Class, BMW 7-Series, and Porsche Panamera.

But the Audi A8 3.0T starts just below $90,000 and the 340-horsepower, all-wheel-drive Jaguar XJ starts just above $90,000. Those cars are likely to hold value better and provide a superior dealer experience. The CT6, optioned up to match those lofty price points, will be better equipped, better to drive, and quite possibly better to look at.

And yet many of those options were central to our enjoyment of this car, central to the getting a truly luxurious experience. If the only thing that matters is performance, we’d direct you to superior performance in a less costly, slightly smaller Cadillac CTS.

As for the CT6, we would be inclined to accept less power in the CT6 3.6 Premium Luxury with the Bose Panaray sound system and the accompanying Comfort Package for a $79,655 total, or $77,655 with current discounts. 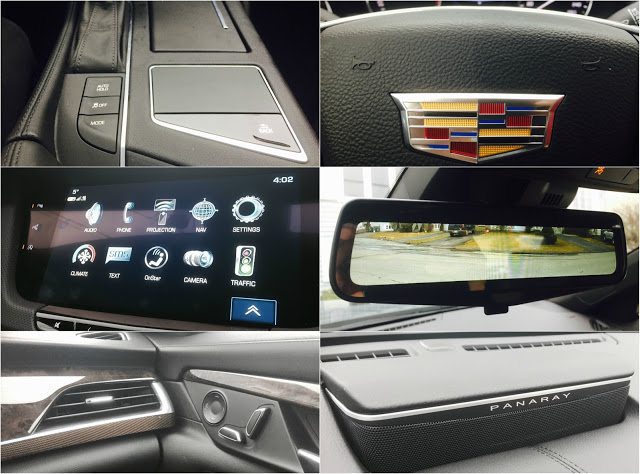 WHAT’S THE VERDICT?
This is not a Cadillac Fleetwood Brougham.

In a prior era, an era of Fleetwoods and DeVilles and Eldorados, it would have never seemed conceivable that the best driver’s cars in a variety of luxury car segments would be Cadillacs.

But do Cadillac sedan buyers, those that remain, want Cadillac to be a better BMW?

The full-size Cadillac CT6 shines brighter and brighter as the road becomes twistier and twistier, as traffic dissipates, as the sun comes up.

Conventional automotive sports sedan theories suggest that the buyer who wants this much athleticism will inevitably pursue a smaller car, a CTS or perhaps an ATS. The buyer of a full-size luxury sedan, a veritable limo, surely doesn’t need a bona fide sports sedan.

Or does he? What’s so wrong with Cadillac overachieving? What’s so bad about an automaker that manages to create a lightweight full-size luxury sedan that merges the best of both worlds? The CT6 is a big Cadillac that works out at the gym in the afternoon and then changes into a tuxedo for an evening gala.

Cadillac has succeeded at bringing midsize verve into the full-size category, at merging full-size presence with midsize vigor. I won’t fault Cadillac for allowing me to have fun in a category all too often reserved for stodgy stoicism.

Now Cadillac has to fix the niggling faults, the technological foibles and build peculiarities, if the CT6’s price point is going to reach to $87,000 and beyond. There’s little room for imperfection in this stratosphere.

Timothy Cain is the founder of GoodCarBadCar.net, which obsesses over the free and frequent publication of U.S. and Canadian auto sales figures. Follow on Twitter @goodcarbadcar and on Facebook. The CT6 was supplied by GM Canada’s press office.