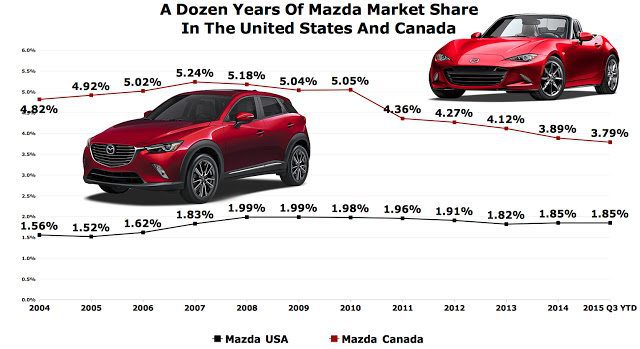 It’s not just GoodCarBadCar. Across a wide spectrum of automotive publications, Mazda reviews often begin and end with effusive praise.

The Mazda 3 is among the best small cars.

The Mazda MX-5 is the best affordable sports car.

The Mazda CX-3 and CX-5 are the most fun-to-drive crossovers in their categories. Even the aging Mazda CX-9 still brings an aura of Miata to the three-row crossover arena.

Yet Mazda’s North American operations are unable to improve the brand’s share of the market.

In Canada, the Mazda brand may fail to sell more than 70,000 new vehicles in calendar year 2015, which would make it the first sub-70K sales year since 2011, when the market was much smaller.

Even if Mazda Canada can creep forward in the fourth quarter to match last year’s disappointing sales pace, total volume would still be down 17% compared with the company’s peak in 2007. Mazda owned more than 5% of the Canadian market as recently as 2010 but now manages to claim less than 4% of the market.

Mazda was healthier than the typical auto brand through the recession – the brand’s share climbed to 2% between 2008 and 2011 – but it was an ignored brand then and is equally ignored now.