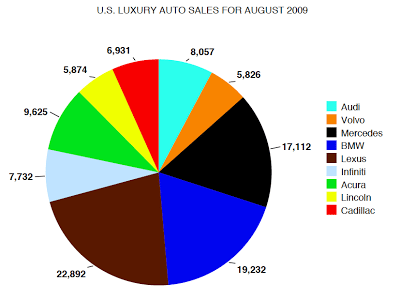 LUXURY CAR SALES IN AMERICA FOR AUGUST OF 2009

Of the nine automakers listed below, only Audi and Volvo improved upon their August of 2008 Sales Stats last month in America. Porsche managed to do so, as well, going from 1,404 vehicles sold in the eighth month of 2008 to 1,526 last month. Combined sales of Porsche, Saab, and Hummer were fewer than 2,800 in August. Jaguar and Land Rover fail to report their American sales totals. Bear in mind the Canadian figures for August in which Audi, Mercedes-Benz, BMW, Acura, Lexus, Volvo, and Porsche all posted notable increases over August of 2008. Check out July’s luxury sales chart here.