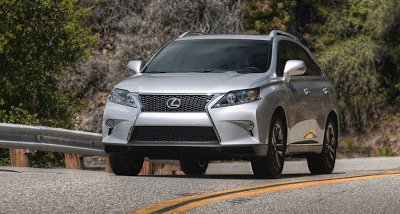 We’ll be hearing about high U.S. sales volumes from most automakers when May sales data is released on Friday, June 1. Before those numbers are released, however, it’s worth finding a bit of luxury automobile sales context from the data already released this year.

It’s starting to seem like it’s been a long time since “Japanese luxury” equated exclusively with the Toyota Cressida. Lexus, Acura, and Infiniti are well-known brands in North America and, particularly in the case of Lexus, becoming more famous across the globe. Toyota’s luxury brand ranks as the third-best-selling premium brand in America so far this year, 23,667 sales ahead of Honda’s premium division, Acura. Infiniti trails Acura by 9631 units, slotting in behind Audi and Cadillac, two brands which don’t sell with quite the same frequency as Acura. 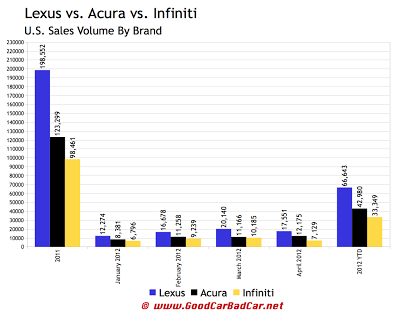 Lexus sales are up less than 3% this year. Acura is up by just eight units. And Infiniti is down 3.6%. The overall new vehicle market has improved by 10.3%. It’s not just mainstream brands that are reporting major gains. Mercedes-Benz, BMW, Audi, Land Rover, Jaguar, Maserati, and Bentley have all seen sales improve better than 15%.

The three most popular Japanese luxury vehicles – sales figures for which are posted after the jump – are down sharply this year. Of the 22 nameplates sold by Lexus, Acura, and Infiniti this year, 15 have recorded declining year-over-year sales. The Infiniti JX, of course, wasn’t on sale at this time last year and thus has no previous year data with which 2012’s 2619-unit four-month total can be compared.

Lexus vs. Acura vs. Infiniti isn’t a battle mentioned that often, mainly because Mercedes-Benz and BMW are far more formidable foes for the Lexus brand. Nevertheless, 26 years after Honda established Acura, the success of these three brands in comparison with one another is routinely similar. Lexus easily beats Acura. Acura easily beats Infiniti.

Sales figures for any premium Japanese car and for any other vehicle currently on sale in North America can be accessed through the dropdown menu at the top right of this page. A complete rundown of every brand’s April 2012 sales can be viewed here. And every one of the 255 vehicles acquired at least once in America is ranked by year-to-date volume here. Click the above chart for a larger view.