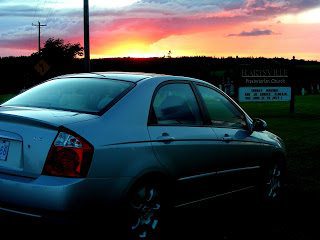 Your acquaintance with Kia may be considered brief. You may believe Kia’s history to be short and their reputation still tainted by the relatively recent past. A low quality loner, some have said.

But Kia is South Korea’s oldest car company. That fact means that Kia has a longer history to draw on than Hyundai. What you remember from the first Kia’s you laid eyes on has little resemblance to what Kia produces now, nor does it really matter. And Kia Motors, senior Korean automaker, has actually been a part of Hyundai Motor Company since 1998.

Lesson learned. Preconceptions are often misconceptions, and one such mispreconception involves the idea that Kia’s are cheap. Inexpensive, for sure. When I first drove a Kia Rio (previous generation) I was alarmed at its price tag. It was apparent to me that the Rio I drove featured one of the lowest price tags of any new car on the continent, but was still overpriced. The car did change gears, but I wondered how. The vague, rubbery shifter I was in control of seemed to have no connection to the real mechanical world. Interior materials were comprised of plastics hard enough to injure sensitive fingers and fabrics coarse enough to cause rashes.

Yet with the flick of a switch, the next Kia Rio became a highly competitive subcompact. Likewise the Kia Sephia/Spectra, whose named evolved into Spectra & Spectra5. Kia’s compact underwent a revolution to become a worthy candidate for buyers searching in the mid-to-high teen $ market. 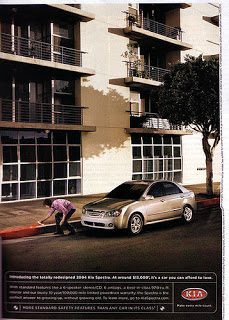 Let’s be honest from the start. If you, the buyer, can buy a Honda Civic…. do so. However, the Spectra is worthy of your dollars. This is GoodCarBadCar, but in all honesty, what turns a BadCar into a GoodCar these days is not usually increased reliability and roadworthiness. Rather, a GoodCar must possess some cool, something new, something ingenious. A GoodCar must stand out from the crowd.

The Kia Spectra isn’t overtly cool, new, ingenious or outgoing. Thus, we can’t truly name the Spectra as a top choice in the crowded Civic/Mazda3 field. Nevertheless, the Spectra will fulfill the demands of its owner, it will likely be a solid and reliably machine (if J.D. Power is to be believed) and it will do all this without harming your wallet.

We drove a Kia Spectra 902 kilometres to Prince Edward Island, around the Island, and back home. Our fuel economy was superb, at 7.31 litres used every 100 kilometres. Energuide’s combined rating is 7.45L/100km. The aforementioned segment dominator from Honda has a combined rating of just 6.95L/100km.

The Spectra saw a wide variety of roads on a trip to the in-law’s wedding. Construction was everywhere prior to the Confederation Bridge, and the frequent stints on rough pavement proved the Hankook tires to be the main cause of excessive noise, rather than poor wind sealing or sound deadening lack. During the first 300 km of the trip, Spectra was leading a UHaul, so twisty sections of the highway were not used and abused. Kilometres 301-599 were wholly based on PEI, where typical side road speeds are substantially over the posted limit. We were not able to enjoy awesome Route #955 through Murray Corner, New Brunswick as we did in the previous week’s Nissan Versa (read that test drive here), but PEI still offers up some fun.

Spend 900 kilometres in any car over a short timespan and you notice the highlights and lowlights of the cockpit and passenger compartment. The interior design had no visual flair, but the positioning of each button was aligned properly. Lacking visual flair is one thing; but the appearance of singular elements as though they belong in cheaper cars isn’t necessary. In this day of beautification, bling, and bold design, give me a cool shifter. Not something out of a late 80’s Ford.

Enduring the monotonous drive from Aulac, NB to Borden, PEI requires decent passing punch. One lane each way, never a division. In late June, the Nissan Versa struggled on this patch. The Spectra provided more punch than its sub-140 bhp would suggest. A little thrashy at the top end, but the job was done. As four-speed automatics go, the Spectra’s was actually a bit of a snappy shifter. Revs didn’t disappear with each successive climb through the ratios. A brief stint in a late-model Nissan Sentra not long after showed me, once again, the agony of significant rev drop-off between first and second gear.

Transportation is a wonderful thing. For those who seek a great destination; a great view – and care little about the journey – a Kia Spectra can carry them down Route 225 from Cornwall to Kinkora to behold a sunset unlike anything our small party of travelers had ever seen. They can park in front of a small church, look at over an old cemetery, and forget about how they got to this place. Some people just want to see the sunset.

For the rest of us, problems arise. The sun was quickly falling. We could see that it was going to be an impressive sight if only we could come upon a suitable perch to ‘view the view’. The Spectra got us to Hartsville Presbyterian in time…. but just barely. A few tighter corners, a few more revs, maybe some stickier tires and a bit more low-down urge. That’s what we needed. Just give us a bit more time to savour the view. 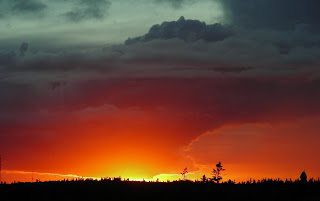