Honda builds two of America’s best-selling cars. The Accord and Civic finished 2010 ranked second and fourth, respectively, in total U.S. car sales. As for SUVs (or crossovers or CUVs or whatever you want to call them), the Honda CR-V was America’s most popular in 2010. The Honda Pilot ranked eighth. Among minivans, the Honda Odyssey was America’s third-favourite in 2010.

Honda, having proven that the company’s design departments resides in the outhouse, is still a wildly popular brand in the United States. In fact, Honda sold 1,096,874 vehicles in America last year to finish fourth behind Ford, Chevrolet, and Toyota in overall volume.

However – you knew some bad stuff was coming – Honda has brought a few dogs to market in the last couple years. Most notable among them is the Accord Crosstour. From the first day it appeared on Facebook to a dreadful response, the Accord Crosstour was in tough. That said, in the Graph below where the Accord Crosstour sees its sales compared with those of the Nissan Murano, Subaru Outback, and Toyota Venza, pay close attention to the numbers on the left side. These are U.S. monthly sales.

So while you see the Crosstour treading water in the chart below, as not a single month measured up to the Venza’s volume, do remember that Honda’s been selling a couple thousand of these ugly carish things each month. You say the Honda Accord Crosstour is ugly, and so do I, but Suzuki only sold 351 of the pretty Kizashi in February 2011. Mazda only sold 2258 copies of the handsome 6 in January 2011. And sales of the swoopy Volkswagen Passat CC totalled just 1781 in October 2010. Is the Accord Crosstour unsuccessful? Moderately so, but considering the fact that Honda’s getting pretty decent extra volume off an ugly jacked-up V6-only Accord wagon, the Crosstour’s success isn’t lacking nearly as much as we thought it would. 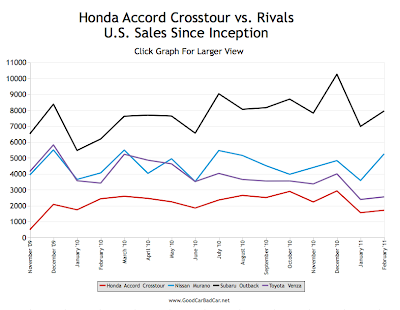 The Honda CRZ’s story isn’t all that dissimilar. Initial reviews were more often hate-it than love-it. Not only was the CRZ perceived as a slow sporty car, its hybrid powertrain didn’t generate the sort of fuel economy figures critics expected. Then insulting cries about the CRZ’s poor sales caused consumers and automotive industry observers to wonder if Honda would pull the plug on the CRZ.
But the CRZ was a hit in Japan, and, a look at the chart below would lead you to believe the CRZ wasn’t faring all that badly in the U.S. either. In three of the seven months since the Honda CRZ went on sale it out-sold the Volkswagen GTI. In its second month on sale the CRZ topped the Scion tC. And not once has the Mazda MX-5 Miata come close to matching the CRZ’s volume. True, the MX-5 isn’t exactly a direct rival for the CRZ (what is, after all?) but we’ve long since accepted the fact that the Miata is a niche market car; that Mazda will stick with the Miata for ever and always. So how can distinctly greater volume from a car priced not that far beneath the Miata be considered so terrible? Sporty coupes are almost always hit-and-miss, yet it’s best we acknowledge the CRZ’s placement is somewhere in between. 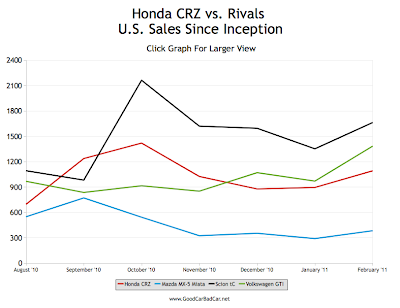 Now the Insight, yes, here’s a different story. As one of America’s top-selling cars, the Toyota Prius appears to be a natural target for the second-generation Insight. They’re both available exclusively with hybrid powertrains, they’re both five-door hatchbacks, they’re both Japanese, they both wear the badges of the planet’s two most famous early hybrids. But the Insight’s fuel economy doesn’t measure up. It’s also the dowdier of the two. And memories of the sweet first-gen Insight linger. We all would’ve said Honda was crazy if the company decided to bring back a tremendously aerodynamic lightweight two-seater, but then we would have driven it and love it. Perhaps with gas prices rising, Honda would have looked intelligent rather than unfashionable had it rebirthed the first Insight. 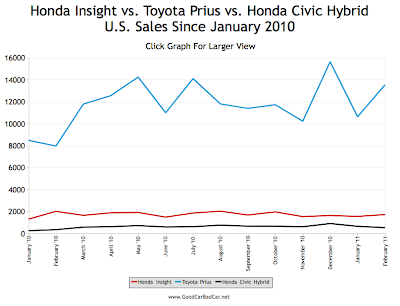 The Acura ZDX Concept sucked. Sadly, the production version wasn’t much better. One of those rare machines a company determines is a must-have because another company is building one, even though that other company isn’t really building very many of them and most people really don’t like the other company’s version, the ZDX tops that by being worse in every way than that other company’s version. Styling is subjective, sure, but the numbers manifest agreement, so let’s run with it. The ZDX is uglier than the BMW X6. It’s not as fun to drive. Visibility is worse. The ZDX’s interior is wickedly complicated; the X6’s isn’t. The X6 is also available with some rockin’ wheels and some honkin’ engines. The ZDX isn’t. Throw the GoodCarBadCar.net-recommended Infiniti FX into the mix and the ZDX starts to look worse, as evidenced by sales figures that started in the toilet before progressively being flushed deeper into the sewer system. 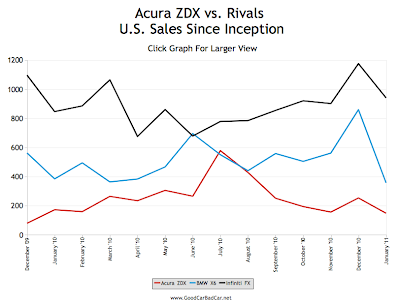