Cadillac’s new CTS is a gem for GM. Class-competitive, dynamic both on the road and in pictures, the powerful CTS is bound for sales success. When success strikes, the key for automakers is to stretch the brand. Just take a look at Mini – Convertible, then Clubman, and an upcoming cute-ute.

Therefore, Detroit is the location for the introduction of the CTS coupe concept. Striking design goes a notch or two further than the already striking CTS sedan.

Cadillac CTS debut factoid: the CTS coupe can handle a 2.9L turbodiesel which generates 250 bhp and 406 lb-ft of torque – for international markets, no doubt.

Horsepower isn’t lacking underneath the hood of the other new CTS. V is becoming a very accepted performance brand, but with high hopes of competing with Mercedes AMG and BMW M, Cadillac had to up their game. The recipe clearly included a statement which read: “No Replacement for Displacement”. Under which, another heading noted: “No Substitute for Cubic Inches”. 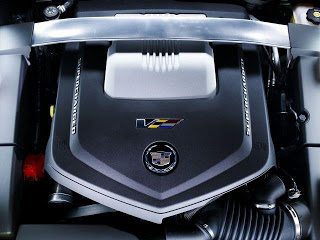 Cadillac CTS-v debut factoid: 550 horsepower and 550 lb-ft of torque supplied by a supercharged 6.2L V8 team to make this Cadillac the second-most powerful General Motors vehicle in the world. Second to…. this car.