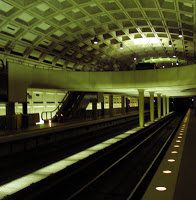 Leaving the District of Columbia, it seems to take quite some time to rid yourself of ‘city’, regardless of what direction you’re traveling. Driving in to Washington offers up the reverse scenario – you may be far from the capital, but you’re in ‘city’ and will not lack that surrounding until you arrive at your destination.

In our case the destination was the Smithsonian Metrorail station, although we used the Metro Center station (just two stops prior) the next trip into Washington. The thought of negotiating National Capital Region traffic all the way from Chantilly, Virginia to the downtown core of the nation’s capital does not frighten me. It sickens me.

Sitting in a car for an extended period of time is what I make a career of – but I believe the car should be moving. There were periods of the drive where traffic seemed to disappear. During mass exodus to the off-ramp number one I thought we were home free to the Vienna/Fairfax Metrorail station.

There was a mass exodus to the off-ramp, but there was also a mass in-gathering at the on-ramp, which was frequently a 3/4 mile appendage. Sitting still resumed. The PT Cruiser was both an utter disaster and complete joy during this stagnant activity. The former; due to its poor radio reception. Each radio station lasted about 1/4 mile, before I resumed the search for another station. The search usually lasted about 1/2 mile. Complete joy; the air-con was a powerful thing and the seats never caused an ache. It’s a pain to achieve zero miles per gallon guzzled, but the overall figure of 30mpg (US) over the duration of the trip made up for those six trips to the station and back.

I eventually discovered that we were eligible for the left-most lane on the major highways. The left-most is not there for vehicles passing (ha!) but is actually designated as the HOV lane. In my line of work, HOV stands for high-output vehicles. But I did not see a single Corvette Zo6, Dodge Ram SRT-10 or any other American muscle cruise the HOV lane.

I realized that the vehicles I was looking for weren’t really high-output by specific definition. Corvettes actually have a very low specific output – plenty of power, but its all derived from a massive powerplant. A BMW M3 or Honda S2000 would be more fitting in the HOV lane.

So it made then made sense to me that HOV applies to Huge Obedient Virginians, of which there are many. Realizing that this classification would be difficult for police to patrol since I myself could not always tell which lane occupier was obedient, I devalued this possible explanation.

Just joking. HOV lanes are for high occupancy vehicles. Hybrids are also permitted access. Unfortunately, cheaters abound. Nothing can stop you from signaling, or just cutting someone off. Lone drivers were frequent abusers. In most areas the lane was faster moving, but it was not an uncommon site to see HOV users struggle in their quest for the right-most lane to the off-ramps.

ification is, and always has been, a bit odd. Your dentist’s Lexus GS450h is listed as a 23mpg vehicle by www.fueleconomy.gov, but your friend’s Mazda3 hatchback is a 25mpg vehicle. They’re equally efficient in the city, but the Lexus uses premium fuel. The Lexus puts out 0.7 tons of extra greenhouses gases every year compared with the Mazda, would be wasting more interior space when inhabited by only one person, and is only two notches better on one Air Pollution Score; worse on another.

Yet the Lexus roams freely in the high-occupancy vehicles lane while the Mazda3 and many like it are restricted. Common sense, anyone? Can I sell you some logic? Could I offer you, Gov. Tim Kaine and Mayor Fenty, a complimentary dose of rationale?

Two Chantilly departure times, separated by only 25 minutes, resulted in a doubling of our travel time to the Vienna/Fairfax station. Much of the extra 20 minutes was sitting on the off-ramp leading to the station’s parking garage. The Washington Metropolitan Area Transit Authority trains are ugly on the outside and move like a large boat on high seas. The advantage, of course, is precise timing. There were no HOV lanes underground, no aggressive dump truck drivers. If my memory serves us correct, we sat in two traffic jams near Foggy Bottom with a total-time-wasted of about 28 seconds. Not bad. Traveling the trains wasn’t cheap, $30 for two of us for just four individual trips. Parking was priced nicely, at just $3.75 a day. Better than that was the simple availability of parking. Don’t try parking in D.C. at this time of year. Discouragement ensues after discovering the constant blockading of streets at sundry times; expense; and general frustration.

Leading to the station, multitudes of Porsches made me take notice. The 911 has lost its exclusivity. Once in Washington, Grand Marquis, large Cadillacs, and Suburbans take centre stage. As expected.