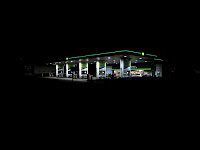 When Sobeys, Loblaws, H-E-B, Costco, and Safeway price their Coca-cola at… SHOCK AND HORROR, an extra $0.15 per litre, do the conspiracy theorists begin their tirade? “They’re working together, Loblaws and Sobeys have always had enough boardroom changeover to make things appear a little fishy. Coke and Pepsi are paying them off!”

Perhaps that sentiment is somewhere on the internet, but I’ve yet to see it. Or what about the feeling of, “Can’t the President work with Pelosi and Reid to sort this soda problem out? The American people can’t live like this.”

Then there’s the persistent emotional backlash against a consumer-driven society from Oxfam and the World Wildlife Fund because we, as a race, can not survive on Coca-Cola alone and much more has to be done to educate humanity on the benefits of water and fruit juice. ‘Acai or death’, they shout.

Give me a break. If the world-at-large is so upset that regular gasoline on the east coast of Canada costs $1.17 CDN/litre or that Manhattan taxi-drivers are paying $3.05 USD/gallon or that the Shell garage on Newnham Road in Cambridge is charging 92.9 pence per litre, don’t buy Coca-Cola at $1.59 for 591 millilitres.

We’ve all heard that argument before, and we hate it. You can’t compare apples with oranges or Pepsi with gasoline. Yea verily. But, can we not admit to our own selfishness on the account of petrol? During my brief life, I’ve heard very few heated debates over inflation; specifically NO debates over the rising cost of soda or maple syrup and an unfortunate lack of debate over the increasing expense of school supplies and general medicine.

But boys oh boys, let us argue about gasoline. Nobody likes Microsoft’s attempts at monopolization, but we’ll not deny Bill Gates his well fought for money. We actually grow fearful when automotive and airline jobs are cut as a result of poor financial results. We want our government to have a surplus, we need celebrities to be rich (or they’d be just like us), and we don’t generally reject the effects of capitalism.

Yet, when we hear the yearly financial earnings of Shell, ConocoPhillips, and ExxonMobil, our intelligence is insulted. With good reason, on some occasions. To see the price of fuel after Katrina and then hear of record profits – well, that stings. But if we the consumer buy from the producer and see no reason to let $3.00 a gallon stop us, they have every right to keep on selling. No, they really do. If you want to get upset because of the high taxes on fuel, that is another argument. But when it comes to the profits Shell and others make because of simple supply and demand, we have got to blame ourselves. At least a little.

The price is high in my hometown. I am about to drive to the mall. The Good Car Girl needs shoes, ya know, the things we put our feet in so that we can walk. We’re going to drive a car to the place where she can find shoes for her feet. Catch the irony?

Last night we were five minutes too early to pick up a passenger, so we took a brief drive to look at cars. Admittedly, we spent most of the time looking at Lexus hybrids. Good for us. We were channeling DiCaprio and Sarandon.

There is a vicious cycle going on. Conservation is a big time buzz-word now, and it’s a buzz word that will continue to…. umm… buzz. We all know cleaner cars would be a good thing, but while requesting cleaner cars we still use the same old liquid that causes every vehicle to pollute. And to buy that liquid, we support companies that drill in areas that ought to be left untouched. There goes that part of the conservation. We accelerate quickly away from the gas station because we’re so ticked off that it cost $75.00 and by accelerating so quickly, we burn more of that ‘expensive’ liquid and return to the gas station sooner. As our words say, “Conserve, preserve, reuse, reduce….” our actions sing another tune.

We say gasoline is expensive. We don’t act like it.