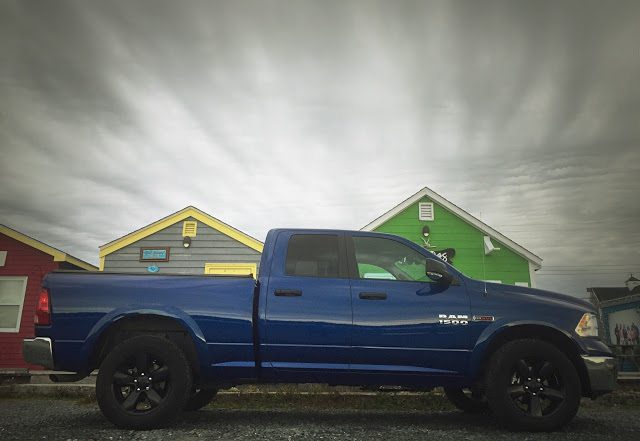 You want a full-size pickup truck.

But there’s one thing holding you back from pulling the trigger, from signing on the dotted line, from explaining to your friends that you need a pickup truck because you’re “renovating” your condo.

It’s not the MSRPs of modern pickup trucks – you know the steep discounts and low interest rates will make it doable if you avoid the options sheet.

It’s not the modern prettification of pickup trucks – black wheels, not chrome, will make your truck look tougher than Tonka.

And it’s not the loss of flexibility – modern four-door pickups can be family haulers.

No, it’s the fuel bills that have you worried. That’s why you’re considering this 2015 Ram 1500 EcoDiesel. Sure, our Outdoorsman tester was fitted with $6,925 in options besides the $5,700 cost of the 3.0L EcoDiesel/8-speed automatic powertrain. But you don’t need that stuff, right? You just need four doors, a bed, and reasonable fuel consumption.

But how much money can you really save? To what degree can a 5,400-pound full-size pickup truck’s consumption truly be reduced? Can you buy a Ram 1500 EcoDiesel and feel comfortable taking pointless drives along the coast on a summer’s evening, safe in the knowledge that you’re not breaking the bank? 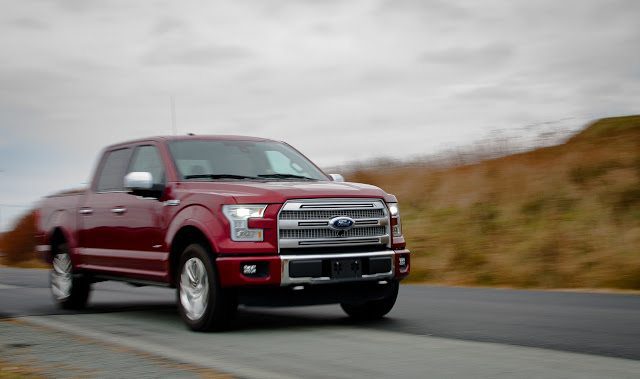 We have answers to these questions. Based on back-to-back week-long tests of the 2015 Ram 1500 Outdoorsman Quad Cab 4×4 EcoDiesel and the 2015 Ford F-150 Platinum SuperCrew 4×4 EcoBoost, we’ve determined just how much more Eco the EcoDiesel really is.

There are, of course, a number of qualifiers we must get out of the way. These trucks aren’t perfectly comparable. The Ram’s Quad Cab format is a truck that competes somewhat indirectly with both Ford’s SuperCab and SuperCrew. For a true SuperCrew competitor, you’d need the Ram 1500 Crew Cab, which we’ve tested twice before. The trucks aren’t equipped all that similarly, either, with the Ford lopping an additional $20,000 onto the sticker. 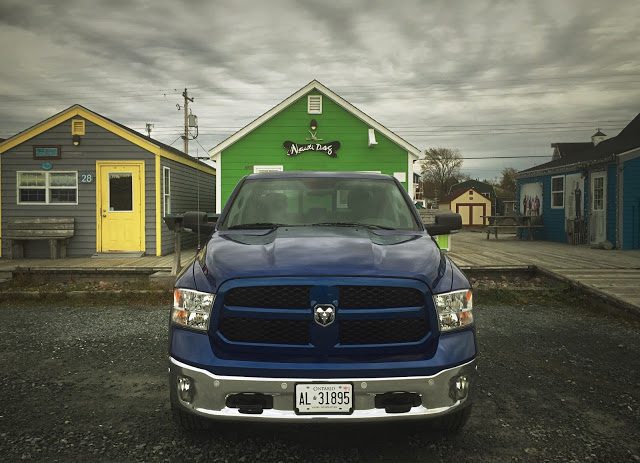 Rather obviously, the Ford’s 3.5L twin-turbocharged V6 EcoBoost isn’t a diesel engine; the Ram’s EcoDiesel is. Both are the most expensive engines in their respective lineups. (Ford also offers a more efficient EcoBoost, the 2.7L V6, which still makes plenty of power.)

Although we didn’t drive the two trucks on all the same roads with the same pedal pressure all the time, the trucks were driven by the same driver in the same environs – a mix of Halifax city driving, urban Dartmouth driving, and very little highway time – with similar prevailing temperatures over the course of two weeks.

The Quad Cab isn’t nearly the family truck that the SuperCrew is. Rear seat legroom is tight, and rear-facing child seats are likely to be a pain. In terms of capability, the new F-150 is also a class-topper in terms of payload and towing capacity.

There remain some bits in the eminently useable and straightforward Ram 1500 interior that don’t feel up to snuff when the price stretches past $35,000, let alone to $57,615. The Ram’s UConnect operates like it’s many generations newer than the F-150’s MyFordTouch, which it essentially is. Though the coil spring rear suspension of this Ram doesn’t offer the luxury-like ride quality of the two air-suspension-equipped Rams we’ve driven over the last couple years, ride quality was still better in this Ram than it was in the accompanying F-150 FX4. Both trucks ride on 20-inch wheels. The Ram steers more precisely, handles with greater alacrity, shifts up and down through the wide array of gears with more intelligence and smoothness, and never feels underpowered.

The F-150 Platinum looks like a very premium truck and draws ogling eyes everywhere. The bed side steps and tailgate ladder are nice touches. EcoBoost power is jaw-droppingly impressive. We trust that the truck is lighter than F-150s were because of this new aluminum body, but it still feels like the heftier machine on the road: less nimble, more difficult to see out of, less structurally rigid.

In such a thoroughly modernized pickup truck arena, the differentiation which causes the Ram, Ford, and GM’s trucks to feel like individualized specimens is quite a welcome turn of events. This isn’t a game of samesies.

These two trucks do, however, share one thing in common. Both the 2015 Ram 1500 EcoDiesel and the 2015 Ford F-150 EcoBoost make forward progress by consuming non-renewable fossil fuels. In real-world driving, here’s how the math breaks down.
Our 2015 Ram 1500 Outdoorsman EcoDiesel test vehicle consumed diesel at a rate of 9.7 litres per 100km, or 24.2 miles per gallon on the U.S. scale. The 3.5L 2015 Ford F-150 Platinum EcoBoost consumed regular gasoline at a rate of 13.2 litres per 100 kilometres. This means that for every 100 kilometres of mixed driving, the Ram drinks 3.5 fewer litres of fuel.

But the fuel consumed by the Ram is more expensive than the F-150’s regular gasoline. In Halifax, Nova Scotia, regular gasoline costs $1.01 per litre; diesel costs $1.05. (That’s a per gallon difference of $0.15.) 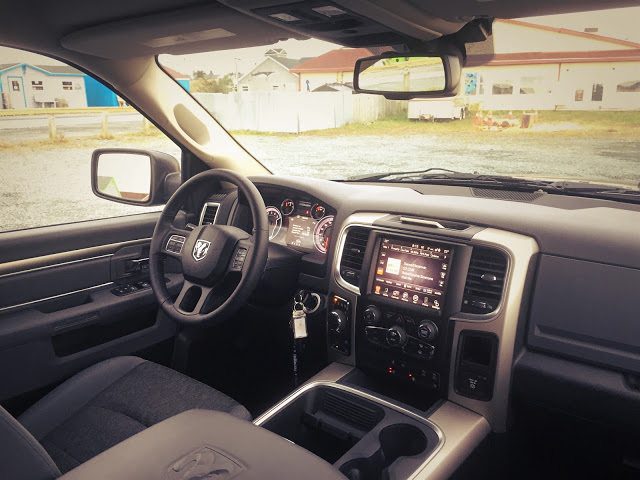 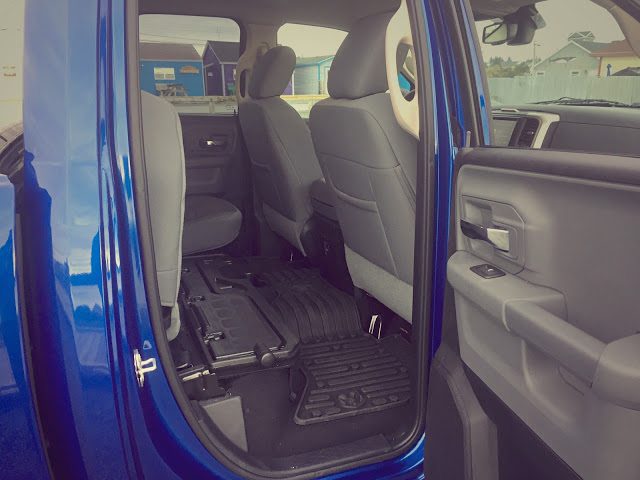 This isn’t to suggest that these are the prices you’ll encounter at your local dealers, with your deal subject to whether you remembered to buy on the last day of the month, the level of interest one dealer may have in your trade-in that the other dealer won’t, and ever-evolving incentive schemes. But one thing is clear: the Ram 1500 EcoDiesel’s frightening $5700 upgrade cost probably shouldn’t be quite so frightening, washed away as it is by attractive offers from FCA Canada’s accounting department.

Better yet, after an introduction phase that made it difficult to find Ram 1500 EcoDiesels on dealer lots, availability has dramatically ramped up. At Halifax’s two Chrysler dealers, 29 of the 89 Ram 1500s available are equipped with the 3.0L EcoDiesel.

Timothy Cain is the founder of GoodCarBadCar.net, which obsesses over the free and frequent publication of U.S. and Canadian auto sales figures. Follow on Twitter @goodcarbadcar and on Facebook. The Ram was supplied by FCA Canada’s press office; the yet-to-be-reviewed F-150 by Ford Canada.