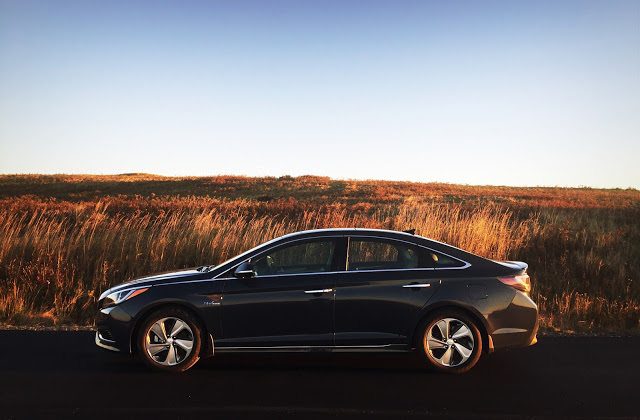 Hallowe’en begins earlier every year, doesn’t it? When the first kids appeared at our door before 5:00 PM, their father had a few questions regarding the 2016 Hyundai Sonata Hybrid parked behind our own Honda Odyssey.

He drives an older Civic now – of course he drives a Civic, this is Canada – but is considering replacing the Honda with a new Kia Sorento or a new Sonata. In the end, all the questions boiled down to one final query: “Is it any good, though?”

“It’s a very nice car,” said I, “But I wouldn’t choose it over the regular Sonata.”

Minutes later, however, with superheroes and farm animals and ghosts and Frozen characters strolling past the Hyundai, I realized I really ought to double check my math before the Civic driver in question was out of reach, just to be sure.

The 2016 Sonata Hybrid is, after all, an unpunishing hybrid. 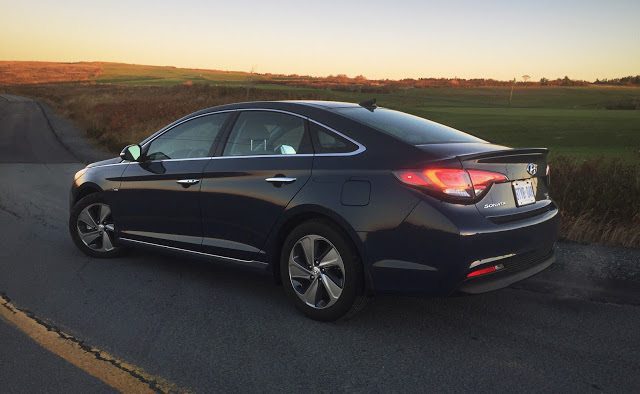 There’s no power deficit. The driving experience isn’t hindered by its hybridness as so many hybrids are, thanks mainly to Hyundai’s decision to equip their midsize hybrid sedan with a conventional 6-speed automatic, not leaving the car to languish with a continuously variable transmission. The stop-start function is seamless. At one point, we ran in EV mode up to 65 kmh. To my eyes, the hybrid’s front end makes it the more attractive of the two Sonatas in this current generation, unlike the somewhat ungainly first-gen Sonata Hybrid. Only the cargo space, which is 18% smaller in the hybrid than in the regular Sonata because of the lithium-ion battery pack, forces any compromise upon the Sonata Hybrid owner.

Can fuel savings make it worth it, or even come close?

This isn’t a conventional GoodCarBadCar car review, the one-a-week story on a vehicle sent to us by a manufacturer’s Canadian PR office in which we answer a series of questions to reach an eventual verdict. We’ve reviewed the seventh-gen Sonata already and won’t take this opportunity to do so again.

Why not? The Sonata Hybrid does such an excellent job of maintaining everything that makes the latest Sonata a terrific midsize option, if not a thrilling one. The Sonata and Sonata Hybrid both cause occupants to believe that Hyundai’s engineers must have spent an abnormal amount of time eradicating the car of all potential noise intrusions, obsessed over carefully snuffing out all vibration, somehow made it to the road on which you’re travelling to smooth out the pavement, and designed an entirely sensible interior that makes nothing complicated. The Sonata fosters as relaxing an environment as there is in the modern midsize arena, and while not possessing the outright athleticism of the Mazda 6 or the joyous balance of the Ford Fusion and Honda Accord, does hold its own with predictability and stability when a good road reveals itself. None of this applies only to the Sonata, but rather to both the conventional Sonata and this Sonata Hybrid.

Instead of a conventional GCBC review, this is a money test. I told our trick-or-treaters’ dad that sticking with the regular Sonata was the better bet, but did I speak too soon, not having yet measured the Sonata Hybrid’s week-long fuel economy or compared all the sticker prices?

No, I did not speak too soon.

For the most direct comparison, we’re examining the cost difference between Hyundai Canada’s $35,594 2016 Sonata Hybrid Limited and the 2016 Sonata Sport Tech, currently priced at $30,019. Though not identically equipped, both are fitted with panoramic sunroofs, blind spot monitoring, navigation, heated front and rear seats, a heated steering wheel, and rear sunshades. Differences are mostly minor: the Hybrid Limited has full leather seating; the Sport Tech does not. The Sport Tech has a power passenger seat; the Hybrid Limited does not.

Having spent an extra $5,575 on the hybrid, how long will it take to get your money back?

In our testing, the Sonata Hybrid consumed 6.3 litres of fuel for every 100 kilometres of mostly urban driving. Its sibling, the 2015 Sonata which isn’t capable of being boosted along by battery power, consumed 7.6 litres of fuel for every 100 kilometres in mostly urban driving in the same neighbourhood. The Sonata Hybrid must carry 18.4 pounds with each of its ponies; the 2.4L-powered Sonata’s 185 horses each tote along 18.7 pounds. Both cars send power to the front wheels with a 6-speed automatic and ride on all-season tires.

There are variables, of course. Did we use the same amount of throttle pressure on the same route driven with the same ambient temperatures? No. But the variables were sharply limited by a few key factors: same driver tendencies, same neighbourhoods, same season, same fuel grade. 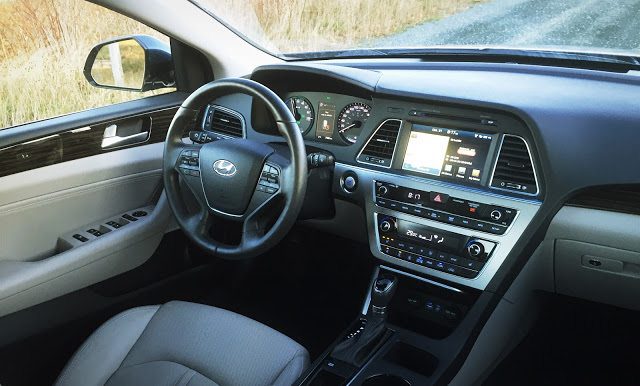 Double the mileage; double the savings. At 40,000 kilometres per year, the Sonata Hybrid owner saves $2,520 over five years.

Triple the total to I-never-see-my-family mileage and the savings triples to $3,780 over five years.

Quadruple the total to I-live-in-my-car mileage and the savings amounts to $5,040 over five years.

Extend the mileage to the extent of Hyundai’s comprehensive 100,000-kilometre warranty – busted after just one year! – and the five-year fuel savings of $6,300 erases the original $5,575 deficit and you pocket $725.

In very few Canadian jurisdictions, tax rebates will alter this equation. Nova Scotia is not one of those jurisdictions. Resale value, not part of the question we’re asking, may also play a role. And higher fuel costs would play a significant role. If the price of regular grade gasoline once again climbed to $1.45/L, the break-even point falls below 300,000 km.

But what if you just really want a hybrid, full stop? In that case, the Sonata Hybrid is worth a look indeed, completing the task hybrids must do well – consume very little fuel – while not punishing you for trying to look like you’re doing something about global warming.

Timothy Cain is the founder of GoodCarBadCar.net, which obsesses over the free and frequent publication of U.S. and Canadian auto sales figures. Follow on Twitter @goodcarbadcar and on Facebook. The Sonata was supplied by Hyundai Canada’s press office.